U.S. Congress to probe assets fleecing by US citizens of Sri Lankan origin 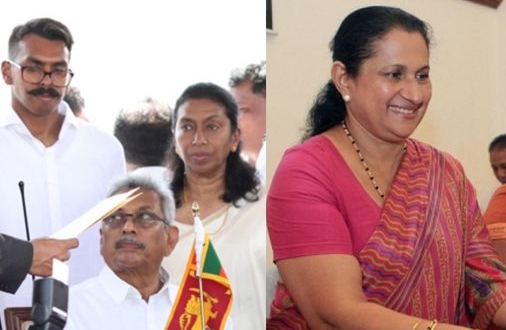 United States Congressman Steven Horsford expressing his awareness of the financial calamity and bankruptcy situation faced by Sri Lanka declared that he was well aware that a single family in authority in Sri Lankan affairs was largely responsible for it, and disclosed that he was initiating a Congressional investigation to ascertain who was responsible for fleecing Sri Lankan resources that led to the current unfortunate situation.

It was disclosed that such probe comes within the US Federal legal jurisdiction.

Horsford revealed that he would be in consultation with US Congressman Gregory Meeks, who heads the influential House Foreign Affairs Committee and also a senior member of the most powerful congressional Financial Services Committee, to initiate the probe. The revelation was made at a recent meeting with a group of US-based Sri Lankans.

When he participated on Friday, April 22 at a fundraiser organized by Sri Lankan expatriates in Las Vegas, in the State of Nevada, Horsford disclosed his plan to intiate an investigation of foreign asset fleecing by US citizens who are part of the administration in Sri Lanka, Horsford represents a Congressional District in Nevada that has a large Sri Lanka expatriate community. He is up for re-election for the US Congress this November.

He stated at the fundraising event: “As the current situation in Sri Lanka, the country is facing bankruptcy and financial collapse due to the family that controls the nation. I’ll assure you that leadership of the United States is made aware of this. I am in touch with Chairman Gregory Meeks on this issue. I am confident I can work with the US Congress to disclose those responsible for fleecing Sri Lankan resources”.

Horsford used the term ‘asset fleecing’ thrice during his address.

The Nevada Congressman was largely responsible in getting increased amount of Covid-19 vaccines to Sri Lanka last year when the country was facing an acute shortage in consultation with the Department of State and US Agency for International Development (USAID), it was disclosed at this gathering by the convener of the fundraising event and a leading political activist of the Nevada Democratic Party Sanje Sedera.

Sedera is currently Chairman of the Sri Lanka America Chamber of Commerce, a national organisation involved in trade, commerce and investment based in Las Vegas while being the president of the Sri Lankan Association.

Horsford’s successful initiative to provide increased amount of medical supplies made Sri Lankan expatriate community rally round him to raise funds for his November re-election bid to the US Congress. The Sri Lankan expatriates said they were delighted to hear that Horsford would be in consultation with House Foreign Affairs Committee Chairman and senior member of the Financial Services Committee Gregory Meeks to initiate an investigation of Sri Lanka’s First Family members of their alleged fleecing of the country’s assets.

Sri Lankans domiciled in the State of Nevada held a rally urging a change of system and administration voicing their displeasure at the ‘Rajapaksa rule’ two weeks ago in Las Vegas.

Congressman Steven Horsford made the above declaration as the United States has legal provisions in Federal statutes to launch such money laundering-fleecing investigation.

The United States has legal jurisdiction to probe such activities of US citizens are engaged in foreign countries. There are certain circumstances in which the United States may apply domestic law abroad. The US may give extraterritorial effect to its laws in cases involving (1) U.S. citizens abroad (2) Foreign citizens employed by U.S. companies abroad (3) Violation of certain laws, such as Foreign Corrupt Practices Act.

The United States may assert jurisdiction abroad if doing so is necessary for its security or government functions.

Under the protective principle, a state has jurisdiction to prescribe a rule of law attaching legal consequences to conduct outside its territory that threatens its security as a state or the operation of its government functions.

The United States may assert jurisdiction over anyone committing a heinous crime, regardless of the location of the crime or nationality of offender or victim.

When Congressmen Horsford and Gregory Meeks along with other US Federal officials meet to deliberate of Sri Lankan assets’ fleecing, and whether such acts hinder the operation of US government functions, the above federal laws will be discussed.