Two years since the end of war 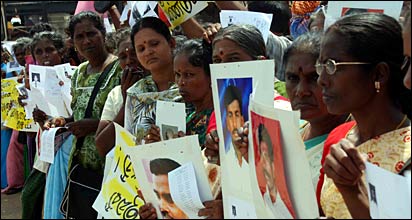 Two years after the end of the war, most Sri Lankans feel a sense of relief that there is no more fighting, and that the Tamil Tiger bomb attacks which used to rock towns and cities including the capital no longer take place.
Yet many are still ambivalent about the nature of post-war Sri Lanka under the increasingly powerful Sinhalese nationalist president, Mahinda Rajapaksa.
Lost relatives
M.A. Sumanthiran of the biggest Tamil party says Tamils, especially in the north and east, still suffer great trauma. “A number of people have lost their children, their parents, their siblings. Many more don’t know whether their near ones are dead or alive and they’ve been looking for them for the last two years and coming up with a blank wall”.
Last month a panel of experts, mandated by Ban Ki-Moon, said there was strong evidence that both sides may have committed war crimes as the war ended.
The government denies doing anything wrong or even killing any civilians. It strikes a defiant tone, as do its many supporters.
War crimes
The whole Sri Lankan people feel furious that we have been betrayed because we fought a bloody war for the past 30 years and we have created peace in this country.
Therefore the whole country is very angry about this situation and we need to show our protest.
Propaganda and counter-propaganda, and differing visions of the way forward, still haunt post-war Sri Lanka, two years on.
BBC Sinhala
Share
Facebook
Twitter
WhatsApp
Pinterest
Email