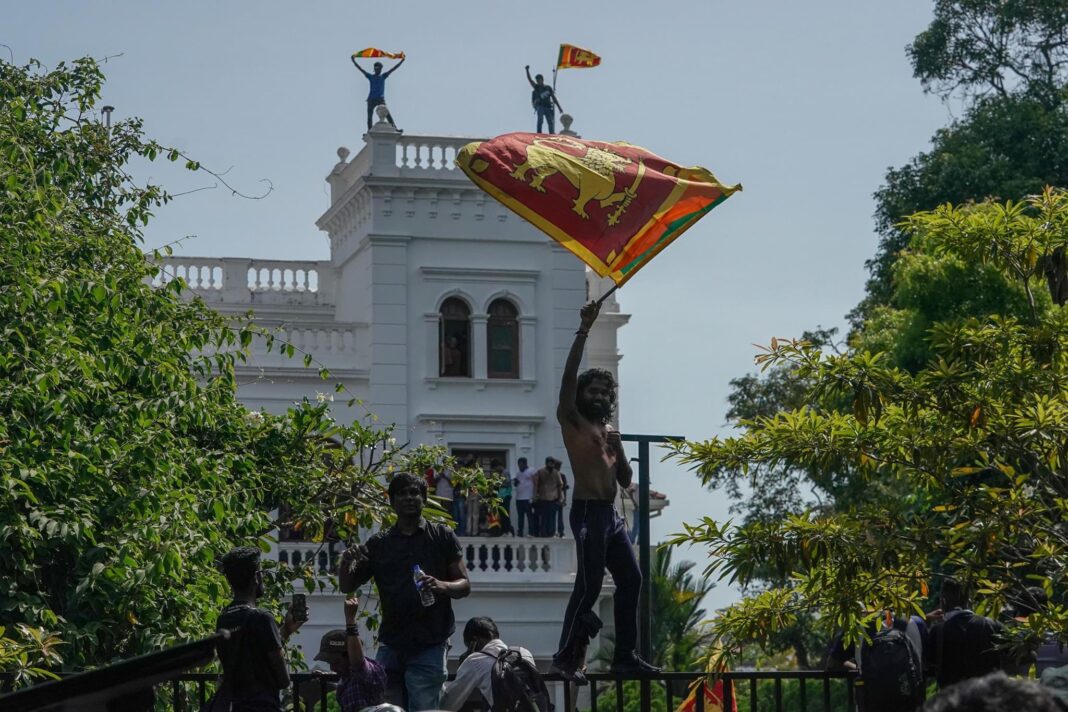 President Gotabaya Rajapaksa taking cover of darkness has fled the country, in the early hours of 13 July, around 01.45am on a military aircraft. On14 July, from Maldives to Singapore like a fugitive fleeing to escape arrest. It was reported, he has submitted his resignation to the speaker through the Sri Lankan High Commission in Singapore. It is said his next destination is Saudi Arabia where he is going to claim political asylum. Now, the protesters and the public are celebrating the victory because they manage to kick out both Mahinda Rajapaksa and Gotabaya Rajapaksa who are responsible the economic collapse of the country. Yesterday, 15 July, the acting President Ranil Wickramasinghe announced that he was going to fully implement the19th amendment of the constitution again. It is a great victory for our democracy that was what I proposed in my last article to SriLankaBrief. Please see the link.
https://srilankabrief.org/go-home-mad-men-go-back-to-19th-amendment-to-
resolve-the-crisis-dr-rajasinghe-bandara/

According to the news on 12 July, President Gotabaya Rajapaksa with the members of his family had made several attempts to flee the country but the airport officials had blocked them. The Immigration officers had refused to give him VIP priority, and asked him to queue up with ordinary passengers although he had expressed concerns that travellers could attack him. The irony is Gotabaya relied on military having 20th amendment passed in the parliament to be the dictator but it seems even the military did not want to make a safe passage for him to escape.

Protesters seized the heart of the government

Visa application from President Gotabaya Rajapaksa, to enter America, had been rejected by the USA government. It seems even international community both in the West and East including the USA and our neighbour India do not show any sympathy on him. Yesterday, 14 July, some MPs in the British Parliament demanded an international arrest warrant on Gotabaya Rajapaksa.

A historical day for our democracy

President Secretariat and the Temple Trees (Prime Minister’s official residence), the powerful guns fell silent. The storm hit the heart of the government, like the Box-in-Day Tsunami in 2005, the second waves of Tsunami hit harder than the first waves. Ranil Wickramasinghe underestimated the popular uprising, after the 09 th May attacks.

The 09th May was a historical day for our democracy. On the day, protesters demanding the resignation of Prime-minister Mahinda Rajapaksa were attacked brutally by his henchmen who gathered to the Temple Trees. Then the supporters of the ‘Aragalaya’ reacted with lightning speed violently and punished the culprits. The attackers were captured and punished. The buses in which henchmen travelled were burnt. The houses of the ministers and MPs’ were set on fire while the policemen and armed forces watching, although they had been deployed with guns to protect those properties. Even President
Gotabaya and Mahinda Rajapaksa were unable to protect their family properties including the ancestral house because the police and the armed forces knew the owners of the properties, the ministers, chairmen etc were responsible for the current situation and therefore they deserved punishment. That was the indication; not only ordinary people but also vast majority of armed forces and the police support the People’s struggle because they are also victims of the worst economic crisis. Mahinda Rajapaksa resigned as the Prime Minister.

Mahinda had been protesting against President Ranasinghe Premadasa (1989-1993) regime like Messiah (Son of God according to the Bible), saviour and liberator of Sri Lanka. Soon after the war victory in 2009 and before the presidential election 2010, his propaganda machinery spread a rumour among voters that an astrologer had revealed to him that ‘Prince Diyasena’ was born.

Mahinda Rajapaksa was told, ‘You are Prince Diyasena, Your Majesty, keep it as a top secret.’

Within days every voter knew about the top secret, although the astrologer had
asked not to tell anyone.

This is the story of Prince Diyasena.

One of the earliest known records of Prince Diyasena comes in the Parakumba
Siritha of the Kotte era.

This Eulogy foretells that a great King will be born in Sri Lanka after a lapse of
2500 years from the birth of Lord Buddha, to preserve the culture and Buddhism
of our country.

Songs were composed and sung to praise the king, ‘Long Live Great King!’
‘Ayuboveva Maharajaneni’. He was ready to make a throne and brought the 18 th
amendment to the parliament to be the dictator forever.

After the Ester Sunday Terror attack, Gotabaya Rajapaksa had also been addressing the voters same as his brother Mahinda, as Prince Diyasen. Mahinda Rajapaksa, the mastermind of the Gota’s election campaign and 20 th amendment, appeared on every stage with Gotabaya during the last presidential election campaign to convince the idiots that his brother Gota was the only man fit for the job and capable of protecting the Buddhist country and bringing economic prosperity to the nation. The ‘Media Mafia’, behind Mahinda Rajapaksa, published fake news to ignite racial hatred for Gota’s victory. On May 23, Divaina, known for its nationalist stance, published a Front page article alleging a
Muslim doctor Shafi Shihabdeen had secretly sterilized 4,000 Sinhala Buddhist women after caesarean deliveries. Gota won more than 69 million votes, biggest ever mandate in Sri Lankan election history. Since then he acted as he had the mandate to govern the country forever.

What has happened since he became the president in 2019?

Gotabaya in his resignation letter to the Speaker and Sri Lanka Podujana Peramuna use Covid-19 as scapegoat for the current economic crisis. How much money the government spent on the secret deals such as buying Sinopharm vaccine from China at $15 (US dollars) for a jab when AstraZeneca Vaccines could be imported from UK at $ 3-5. Billions of dollars could have been saved without those secret deals. How many people had to die due to mishandling of Covid-19 pandemic. Detainees who were demanding protection from Covid-19 virus in the Mahara Prison were shot, 11 dead and more than hundred injured.

By looking at bus and train passengers, the way they travel on footboards, engines, between train carriages and roofs, the world can understand the  protection they get from the government. I should give an example from UK how the passengers on public transport are protected. For the safety of passengers, the driver and platform assistants must ensure all passengers must be inside the train safely with comfortable space. They are electric trains. All doors are shut by the driver before leaving the station and open at the next station. For their safety, passengers cannot put their hands or heads out of the windows while travelling on the trains or buses.

Since the country has been declared bankrupt, with the attempts to get loans form IMF and other powerful countries, security and sovereignty of the nation has been compromised. With poverty and hunger more and more women fall into prostitution. Was this the security and the prosperity Gota promised in his manifesto?

Maithripala Sirisena must also be made responsible for the current crisis Gotabaya’s entrance to the presidential election campaign marked our history with blood, the Ester Sunday terror attack. It has been revealed why former President Maithripala Sirisena kept blind-eye on the plan and the attackers after his conspiracy failed to run a government with Mahinda Rajapaksa.

I remember the election promises of Maithripala Sirisena in 2015. He promised to punish criminals of the Mahinda Rajapaksa government (2005-2015) and recover money they robbed from the government. He was given massive mandate, 6,217,162 votes to do it. But he betrayed the people who brought him to power. Had he kept his promises Mahinda and Gota would have been in Prison and our country wouldn’t have fallen into this worst economic disaster.

So he must also be made responsible for the current crisis. He has no any moral
ground to be a voice of the protesters Be careful about the wolves in the sheep clothes and the opportunists It is obvious some people like Hirunika Premachandra have been trying to
exploit the crisis and Aragalaya to gain more preferential votes. Hirunika’s unusual acting clearly shows the target is the gallery and preferential votes.

At the gate of President’s house she was telling the guards ‘Go and tell Pissa (Gotabaya) Hirunika has come’ it was bullshit. Her father was a henchman of Mahinda Rajapaksa.

I condemn the burning of Prime-Minister Wickramasinghe’s house with his valuable collection of 2500 books. This remind me about the burning of the Jaffna Public Library, with its 95,000 volumes and priceless manuscripts, in 1981 by the police and UNP thugs brought from Colombo to rig the local elections. With several high-ranking Sinhalese
security officers and two Cabinet Ministers, Cyril Mathew and Gamini Dissanayake were present in the town of Jaffna on the day.

To secure the victory of great people’s struggle, representatives of the ‘Aragalaya’ must be an integral part of re-building process of the country and the national council. Those who responsible for current situation must be brought to justice, not only Gota, Mahinda and Basil but also their henchmen like former chief Justice Sarah Nanda Silva (who openly accepted how he abused his power to acquit Mahinda Rajapaksa for robbing Tsunami funds) and the culprits who carried out extrajudicial killings for the Rajapaksa.