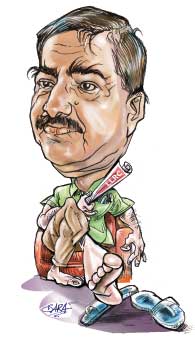 Excerpts of the interview:

Q. Navi Pillay has embarked on a tour of the former war zone in the North and East. Is the TNA satisfied with the visit of Ms Pillay to these areas?

A. Well the main purpose of her visit was to see if the recommendations specified in the LLRC report have been implemented. Earlier the United Nations Human Rights Council passed two resolutions and asked the Sri Lankan government to prepare the LLRC report.
So next September she has to give an oral submission and she is here to obtain first hand information from the people. I heard that she had met with several people in Jaffna, Kilinochchi, Mullaitivu and Trincomalee including certain other areas. I think she is in a position to get more information regarding resettlement and refugee issues and the implementation of the LLRC recommendations as well. There are also several people who met her regarding their missing husbands and children. Therefore overall she would have got a fair account of all these issues.

Q. Do you feel that she could gauge the actual ground situation by this visit?
A. In some areas I heard that there are some government officials like the Ambassador to Geneva who accommodated her in certain areas, and people are not happy with that as they could not talk to her freely. In some other areas there were some government officials who were with her and some members of the public were complaining that their presence had interfered with their chance to present their concerns to the High Commissioner. Had they not been with her I believe that she would have been in a position to get more information from the people.

Q. Now Pillay has seen the ground situation and met with several people and left. In your opinion what should she do next?
A. As the Human Rights High Commissioner to the UN, after her oral submission in September, she has to give a written submission in March. However it is only after her oral submission will we be able to know her views on the Sri Lankan human rights situation, missing persons and various other factors based on the information she had gathered.

Q. There are suggestions made by various quarters that Pillay should set up an office here at the High Commission for Human Rights in Sri Lanka, what is your opinion?
A. Definitely. That is needed because certain matters are still being controlled by the Ministry of Defence. Only now they have set up the Ministry of Law and Order under the President’s control. However though this is under the President’s control, the Secretary is a man from the military, even though this is a civilian matter. So that clearly shows that the Ministry of Law and Order is in a way under the Ministry of Defence.
Law and order was taken away from the Ministry of Defence perhaps to mislead the public and the international community, but it is still it is controlled by a person who was in the military. This clearly shows what the government’s intentions are. Therefore under these circumstances it is my belief that we do need a HR office in this country so that they could oversee the actions and happenings of the government and the country.

Q. There were some families of missing persons in Jaffna who had been waiting to meet Ms Pillay but she had avoided them, but had later met some other missing person’s family members in Mullaitivu. In your view was this correct?
A. I was told that there were over 1000 people waiting to meet her outside the Jaffna public library; most of them had lost their children and some had lost their husbands. They just wanted to meet her and explain their plight to her. However she was taken away through another route and that was not correct. I don’t know what happened but even the Jaffna public was not happy with what happened and they were disappointed.
These were mothers who had lost their children during the war and she should have stopped and spared at least a few minutes with them and paid attention to their grievances. But later she had met some people from the citizens’ committee of the Northern Province who had briefed her about the ground situation and various other matters. However, I feel that she should have met those persons also and spoken to them for a few minutes at least.
Q. As you pointed out, during Ms Pillay’s visit to the North there were some government officials who accompanied her. In your opinion could this have influenced her judgement?
A. I don’t believe that she can be easily influenced. She was a Judge in the International Criminal Tribunal and she has also held high office prior to being appointed as the High Commissioner for Human Rights.
I don’t think therefore that anyone can influence her as she made it very clear about the conditions of her visit and she said that she would visit with an open mind as she wanted to obtain the information first hand and not based on what anyone else had told her. Therefore I doubt she would be influenced by anyone.
Q. With the Human Rights Council meeting in September the Sri Lankan Government has announced that they had appointed several committees and commissions to investigate numerous allegations. Does the TNA have any faith in these commissions or committees?
A. No in fact we don’t have an iota of faith in these matters. We had made it clear even before regarding the committee that was appointed to investigate reports of missing persons. Although many committees have been appointed nothing has been done and these committees have found nothing.
According to reports of the military no one is missing in Sri Lanka. Similarly even now all these various committees have been appointed simply to mislead the international committee and Navanethem Pillay. Since the CHOGM is to be held in Sri Lanka they just want to show the world that the government is doing all these things for the Tamil people. All these measures including the setting up of the Police under the Law and Order Ministry is just another attempt to hoodwink the international community, and nothing else. Therefore we have absolutely no faith in any of these committees.

Q. Is the TNA still pushing for international investigations regarding allegations of war crimes?
A. Definitely. Accountability and war crimes are much more important. If anyone wants true reconciliation in Sri Lanka, then first and foremost either the government must apologise to the families of missing persons or they must come forward and accept that these crimes have happened. If the government is adamant that what they did was correct and is not willing to accept their mistakes, how can there be reconciliation in this country?
There are thousands of people still missing or killed; in that situation without the truth being asserted how is it possible to expect the Tamil people to come and shake hands with the Sinhalese and simply forget.
Instead what needs to be done is that while apologising for the mistakes made, the families of the victims should be given an assurance that these crimes will never be repeated. I am not saying that anyone should cow down to the Tamil people, but the truth must be asserted in a proper way, and the government is not in favour of that. That is why I feel that an independent international investigation is vital. You cannot expect any independent investigation from this government.

Q. During the discussion the TNA had with Ms Pillay on Friday, what were the issues that your party presented to her?
A. We had a very fruitful hour long meeting with Ms Pillay and our delegation was led by Sambandan. During the discussion we told her that the Sri Lankan government does not have the capacity to investigate war crimes or missing persons in Sri Lanka.
We pointed out to her that although 18 aid workers were killed in Muttur and five students were killed in Trincomalee, all these incidents were hidden and the government claimed that none of these incidents had taken place. Even the international group that was appointed to investigate this matter was not doing its job properly and was withdrawn mid-way through the investigation. Because of these incidents no one has any faith in any of the commissions appointed over here.
Therefore we told her that we need a strong international investigation mechanism in order to unearth the truth, as it is only once the truth is asserted that true reconciliation can take place.
We also raised the issue of land grabbing, because a large amount of land was taken from the people by the military and they are using it for cultivation, farming and various other purposes, while thousands of people are still languishing without being able to get back their lands.
Not only that; we also discussed the upcoming elections and the military involvement as well. We told her that we need a free and fair election and this is not possible as long as there is military involvement. We also spoke to her about the attacks on Muslims by the Sinhala extremist groups. These are not good signs and we told her these should all be brought to an end.

Q. What was her response to the issues raised by the TNA at this discussion?
A. She assured us that all these matters will be raised at the next HR session in September, when she makes an oral submission and she plans on presenting the written submission in March as well. She said that that as a UN Ambassador she will raise these matters and that she had gathered the information herself during her visit to the North and East.
She also said that she met the President and several ministers and after gathering all that information she will prepare her report and present it to the HR Council
– Sunday Leader