True version of the Prison massacre : Jailor , guards write to the superiors on how prisoners were killed 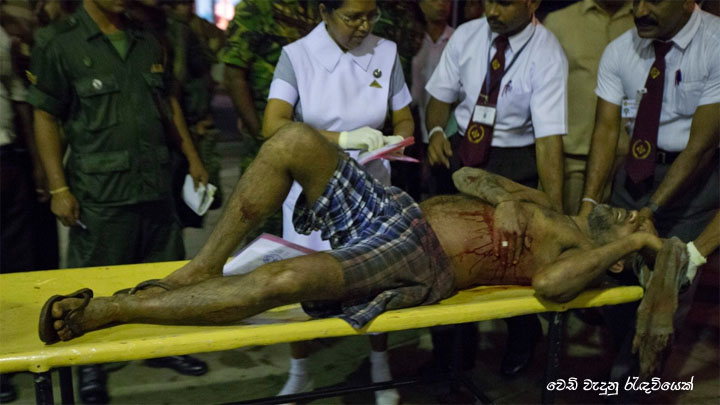 (Lanka-e-News)The Prison officers have written anonymous letters to the Prisons Commissioner and the IGP describing how the STF officers arrived and took four prisoners out, handcuffed and killed them by shooting. These are premeditated and planned murders , they have added.

From the outset following their arrival , the DIG Ranawana , ASP Sylvester and the STF officers have been on a collision course with the Prison authorities when they came to accomplish these murders. Because they were asked to produce a court directive to support their orders , they had begun searching even the prison officers . Thereafter , they have asked the prison officers to point out four remand prisoners of the L ward who have not yet been convicted, whose names they have mentioned (given below) :

They have then taken out the prisoners and handcuffed them with the handcuffs brought by the STF. When they were being taken , there had erupted a dispute between Sylvester and the prison officers who were doing a count on the convicted prisoners in the Chapel ward.

When a jailor was assaulted, a prisoner who spoke on behalf of his jailor was also attacked with the rifle butt causing the prisoner to fall down. He was then kicked, shot at and killed. At the same time without any reason or provocation , the four prisoners named earlier were rained with bullets and murdered in cold blood. Immediately following this grave murderous actions of the STF chief , the prisoners who were being taken count of have retaliated ; they have wrested the weapons of the STF soldiers after attacking them.

In the letters it is pointed out that the best evidence that this whole riot was provoked because of the murders of the four above named prisoners by the STF are the handcuffs on the prisoner Kalu Thushara even when his dead body was being taken to the Hospital.. In that anonymous letter sent by the prison officers the factual events have been described as related above. It also totally rejects the story that the armory was broken into.

Meanwhile , according to latest reports reaching Lanka e news , there had been a secret discussion in the morning prior to this genocide between DIG Ranawana , DIG Anura Senanayake and defense Secretary Gotabaya , the devil incarnate who is notorious for every behind the scene ghastly ruthless murder at Govt.’s behest across the country (including the white Van abductions and killings). On that day , Anura Senanayake had told the Borella police to have 40 police officers stand by . The whole time he had been at the Borella police and orchestrated the operation.

It is learnt that SSP Gamini Navaratne had furiously berated Anura Senanayake to his face yesterday , and warned the latter that he should hold himself fully responsible for all the murders and crimes that were committed in this operation. ‘ You are going to retire shortly , but we have to continue . I am sure you are going to disgrace the force and tarnish the entire police force image before you are rid of ’ , Navaratne had yelled at shameless by birth Anura Senanayake .