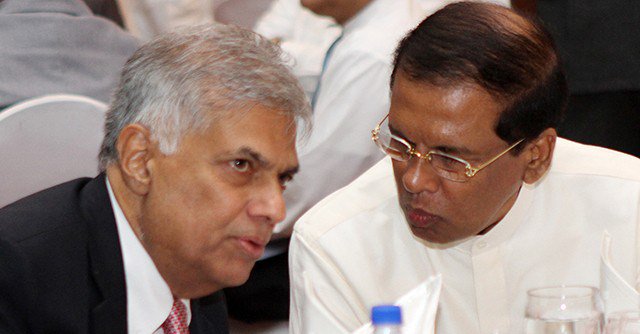 Both Sri Lankan President Maithripala Sirisena and Prime Minister Ranil Wickremesinghe are in denial in the face of a growing perception that their SLFP-UNP coalition is losing support due to inconsistent policies, internal contradictions and drastic actions taken by a coterie without due consultations. Following the recent resignation of Minister Piyankara Jayaratne and a claim by the Opposition led by former President Mahinda Rajapaksa that ten more will quit, Sirisena assured anxiety-ridden UNP MPs that his party, the SLFP, will not scuttle the government. He banned his partymen from having any truck with Rajapaksa’s faction which goes as the Joint Opposition and Sri Lanka Podujana Peramuna. UNP leader and PM Wickemesinghe has pooh-poohed Rajapaksa’s boast that he will topple the government this year as a pipe dream.

But such posturing has not changed public perception that the regime is inherently weak and divided. Its reluctance to hold polls for local bodies for the past year and a half is cited as proof. Sirisena has also challenged Wickremesinghe’s decision to give 80 per cent stake in the Hambantota harbour to a Chinese company and grant 15,000 acres of land on a 99-year lease. Since coming to power, Sirisena has overturned a host of taxation proposals and opposed the hauling of military officers on corruption charges.

But Sirisena’s firefighting has not shored up the image of a regime seen as directionless and indecisive. While issues such as high taxation and rise in prices have alienated the majority Sinhalese, the lack of concern for commitments made have alienated the minorities, whose en masse support had enabled him to win the presidency. The Tamils feel wartime issues have not been addressed. Return of seized lands is tardy and there is no sign of the promised provincial autonomy. The Muslims feel radical Buddhist monks are being deliberately encouraged to abuse them.