Travails and Troubles of Being “Tamil” in Sri Lanka 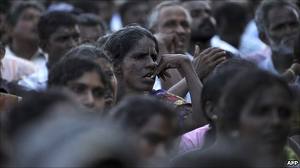 Thulasi Muttulingam
Ever since I landed in Colombo, some 10 years ago (after growing up/ living most of my life abroad), I have been noticing a phenomenon leaching into my subconscious that is not new to many other Tamils living in Sri Lanka; guilt. A sense of having to be answerable for being Tamil. A sense of accepting that my citizen’s rights can and will often be trampled and there is nothing I can do about it.

Young Tamils, both male and female, automatically came under suspicion during the war years. We were all prospective Liberation Tigers of Tamil Eelam (LTTE) cadres in the eyes of the guards at army checkpoints.
In addition to my national identification card (NIC), I had to carry around a document from my educational institute (when I was studying) and later a letter from my work-place, when I started working, detailing what exactly I was doing in Colombo. Oh, and a police report as well, detailing exactly where in Colombo I was living and for how long. Woe betides any Tamil who forgot any one of these documents, especially the NIC.

I remember my then 70-year-old father had the misfortune of losing his NIC at the height of the war in late 2008.

A complaint had to be lodged with the police before a new card could be obtained, but they refused to lodge the complaint. “You are from Jaffna? Go to Jaffna to get your card.” Never mind that he had not lived in Jaffna for three decades at least – and more importantly the peninsula was cut off to commuters at that time, as the war had intensified. There was no way he could get his card from Jaffna even had he wanted to.

The police knew perfectly well that he was an old man who had just returned after retiring from a 30-year teaching stint abroad. They were the ones who did the periodic house checks and got all these details after all. They almost certainly had enough information to know we were no security threat. They were also the ones who harassed Tamils, young or old, for not possessing an NIC during those periodic checks. They had the ability to arrest us on that score alone under the emergency regulations, and most law abiding middle-class Tamils, including ourselves, lived in terror of that possibility.

Urban legends about police torture and even disappearances, while in custody are rampant within the community and most people would do almost anything to avoid that fate. Having an NIC was a big part of it so people went to great lengths to protect it – and if they still managed to lose it (often to pick-pockets), they went to great lengths to get a new one.

And therein cropped up a phenomenon unique to the community. The Grama Niladharis, the police constables, the justices of the peace (and the myriad others whose co-operation was needed to get a new card) all noticed the Tamil community’s frantic haste in trying to replace a lost NIC. They evolved elaborate systems of their own to milk the situation for all it was worth.

Thus was born the phenomenon where an entire community, be they in their own part of the country or elsewhere, have learned that to get anything done, they have to part with Rs 1,000 notes to many of the concerned individuals along the way.

My family and I are no strangers to this. We had to pay for my father’s NIC as well as the other two times my mother lost her NIC. She came back from Jaffna recently, complaining about how the local temple was organizing its annual festival. The festival, though it has been taking place for decades, had to be registered anew with the police.

A police constable came to take the details and even though he hadn’t asked for money, or made any fuss (that’s how they ‘ask’ for it. They are not crude enough to ask for money outright. They just raise a number of objections as to why they can’t give permission before someone takes the hint and slips them some money) – a girl fished out Rs 1,000 to give him.

People in the North have to ask permission from the police/army for every public function they organize and they have become so ingrained in the habit of having to give a Rs 1,000 note in order to get anything passed, they automatically give it out these days as a matter of course.

Immediately after this incident, my mother lost her own NIC. This is the third time; she has the misfortune to get regularly pick-pocketed. Now though, it is three years after the war. The NIC is no longer a matter of life or death to the Tamils. I told her to make sure she got it done without giving a bribe.

Having been a journalist for some years now, I had learnt a lot about my own rights. I didn’t see why we had to stand humbly and apologetically at a Grama Niladhari’s door, while he kicked up a fuss about why he couldn’t ‘trust’ us not to be terrorists. Or the added stress and humiliation of finding his designated sidekick to give the bribe to, as the GN would be above such things himself.

Truth be told, I didn’t really expect to have to give a bribe this time. The war is over and so are any threats from the LTTE. So by extension, is the guilt that the rest of the Tamil community lived with, by being tarred with the same brush.

So much for breathing a sigh of relief on that score. The police station declined to accept their own document of 2009, detailing where my mother lived and told her to get a letter from the ‘Grama Nildahari’, attesting that fact. The Grama Niladhari in question proved as elusive as a unicorn. He wasn’t to be found in his office during office hours and when she finally caught him one day at 12 noon, he told her it was too late in the day and to come again the following day. Noon is too late in the day for a government agent?

Aren’t they supposed to work till 4.30p.m. at least? The next day predictably, he was not there. There followed months of wild goose chases and the filing of one document after another. And finally when all the documents were in order, she was again told to come the ‘next day’ to collect the precious letter. Knowing very well he wasn’t likely to be at work the next day, she gave up. She figured that in this post-war period, she could live with her passport, to serve as her identification when she needed it.

A few trips to Jaffna changed her mind. Passport holders (i.e diaspora members) have to get down with bag and baggage at the Omanthai checkpoint to get registered, and my 60-year-old mother who suffers from a uterine problem that makes it difficult to walk or carry anything heavy, decided that the torture of pursuing the Grama Niladhari for her NIC was still better than this alternate torture.

So she again set on the chase of his elusive figure. The next time she managed to talk to him, he couldn’t find all the documents she had filed and told her to come again the next Saturday.

Since he was hardly at office even on weekdays, she didn’t think he was going to be there on a Saturday. She resignedly told me that she was going to take the usual route of giving the money and begging his ‘help’ as the normal route was not working.

I accompanied her on Saturday to see how this worked out. The Grama Niladhari was not in office but a sidekick of his was. He was apparently a retired Grama Niladhari, who was just ‘helping’ his friend out. His arrogance and bullying demeanour made it rather obvious he was the one designated to take the bribes.

I spent the morning at the office watching him bully each and every person who came by. He always found a missing document or some document not up to scratch, to send them packing. Sri Lankans are a meek lot. They all went quietly away but I wouldn’t. He pulled the missing documents trick on us too. Apparently he couldn’t find our residence number in the lane that we said we lived in, in some book he had, and that, he triumphantly told us, meant his office didn’t have to deal with us.

I told him the house had existed in that lane for several decades and his not having a record of it in some obscure book meant nothing at all. Then he asked us if we had registered in the voters’ list in July. We had – but in October, he couldn’t find any trace of it and told us that it was our problem. Our problem that his office, where I didn’t see a clerk or even a computer in sight, hadn’t updated our documents painstakingly given months earlier.

I finally lost my temper and told him that I knew he was expecting a bribe but he wasn’t going to get it. He called his boss over the mobile phone to come and handle it. The man showed up a few minutes later and brusquely ordered us out. He said he was not going to give us the letter and we could complain to higher authorities if we wanted to.

I did just that. Most middle-class Tamils I know wouldn’t have taken it this far. Certainly, even I wouldn’t have in my pre-journalist days. It is so much easier to part with a Rs 1,000 note than draw attention to oneself, or get embroiled in a public mess. But this time however, I wanted to see how the system worked, because I wanted to write about it in the paper.

The system surprised me actually. I expected to be disappointed or rudely treated at the District Secretariat’s office over my complaint but was pleasantly surprised by their cordiality. Both the Assistant District Secretary and the Administrative Grama Niladhari who received the complaint promised swift action – and they delivered.

After speaking to the Grama Niladhari concerned, who had apparently said in his own defence that we hadn’t given the relevant documents – the Administrative Grama Niladhari helpfully gave us a list of all the documents to be taken and told us, “I don’t think he will reject you this time, but if he does, just let me know.”

Well this time, we got the letter. Two lines detailing that we indeed lived in his jurisdiction – that was all. For this, our Grama Niladhari had made us run up and down for months and was furious that he finally had to give it without a bribe.

He might as well get used to the idea. Many Tamils have become conditioned to parting with money to get what is only their legitimate due, but sooner or later, they are going to wake up to ask why? They no longer have to be apologetic about their existence.