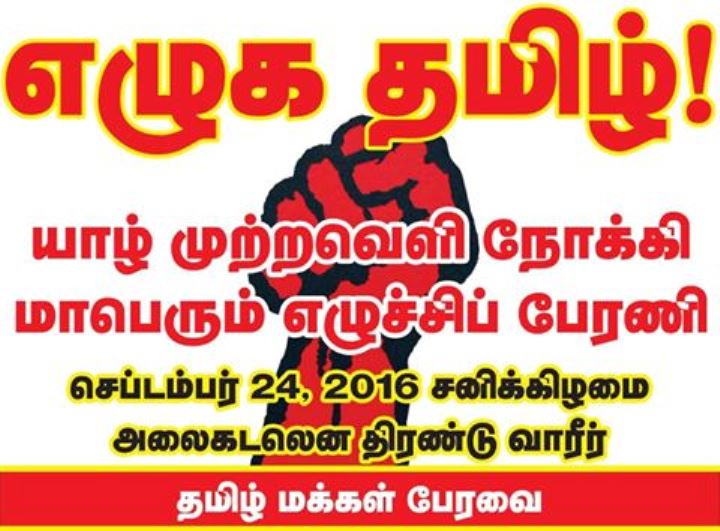 COLOMBO: The Tamil Peoples’ Council (TPC) ,a non-partisan body floated by the Northern Province Chief Minister C.V.Wigneswaran, is inviting people to join a mass protest in Jaffna on September 24, to demand a stop to the construction of Buddha statues and Buddhist temples in areas in the Northern Province where there are no Buddhists, and the systematic settlement of Sinhalese in Tamil areas.

A TPC press release said on Thursday, that the demonstration will also seek the withdrawal of the “Sinhalese-Buddhist” Sri Lankan armed forces from the Tamil areas and the promulgation of a new Sri Lankan federal constitution based on the principle for Self Determination and the unification Northern and Eastern Provinces to form a single Tamil Homeland in Sri Lanka.

The demonstrations will ask foreign powers, particularly India and the US, to mount pressure on the Sri Lankan government to meet the longstanding demands of the Tamils.

The TPC alleges that the Sri Lankan government has deliberately settled more than 10,000 Sinhalese families in Navatkuli, Murunkan, Mullaitivu, and Vavuniya where previously there were no Sinhalese.

Buddha Viharas are sprouting like mushrooms in areas where there are no Buddhists. Buddha statues have come up in front of the 2500 year old Thirukoneswarar Hindu temple in Trincomalee and the Thiruketheeswarm temple in North West Sri Lanka. A Buddha Vihara has come up in front of the hot water springs in Kinniya (Trincomalee district) which is sacred to Saivite Hindus. A Buddha statue has come up in Sambaltheevu with police protection.

Other places in the Northern Province where Buddha Viharas are coming up are Omanthai, Semmadu, Kanakarayankulam, Kilinochchi, Mankulam ,Paranthan and Pooneryn. A 67 foot Buddha statue is coming up in front of the Nainai Nagabhooshani Amman Hindu temple.

“Many big Hindu temples are being built there and many Christian sects have put up structures. We are not against these. We are happy that they are coming up,” Cooray told the media recently.

However, the Sri Lankan cabinet spokesman Dr.Rajitha Senaratne has said that it is wrong to put up Buddha statues where there are no Buddhists because this would only create religious animosities.

As for the TPC’s demand for the withdrawal of the Sri Lankan army from the North, the government has said that the demand cannot be met but army units are being re-located and taken out of civilian areas and civilian tasks. Seized lands not being used by the army are being given back to their original Tamil civilian owners. As for the troops in Jaffna district, they have been downsized to just three battalions, says Jaffna commander, Maj.Gen.Mahesh Senanayake.