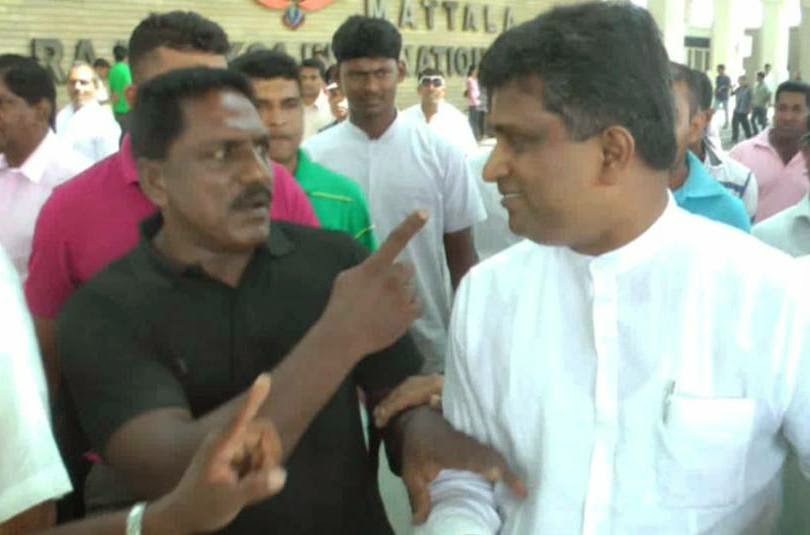 Harim Peiris
The country woke up a few days ago to news that a group of opposition UNP MPs on a fact finding visit to the new airport and port in Hambanthota had come under attack from goon squads. Subsequently, photographs showed His Worship (the UPFA) Lord Mayor of Hambanthota, Eraj Ravindra Fernando, chasing the UNP MPs with a pistol in his hand, closely followed by members of the goon squad. Subsequently the mayor was to claim that he was only acting to protect the MPs and that too with a toy pistol.
The UNP has lodged a protest with the international Inter Parliamentary Union (IPU), a complaint with the Police, naming the Mayor as an alleged perpetrator, plan to raise a privilege issue in Parliament, under the Parliament Privileges Act and have requested the Speaker of the House and presidential elder sibling Chamal Rajapaksa, to oversee the investigation into the attack on the MPs.
Flash back to Allevedy, Killinochchi and now Hambanthota
Go back a few years, to June 2011, to Allevedy in Jaffna, when a group of TNA MPs meeting with a group of party supporters and activists were attacked by a group in military fatigues, which the TNA insists were military intelligence personnel. Or go back to March 2013, when another motley mob attacks a group of TNA MPs meeting in the TNA Killinochchi office. These attacks were reported to the police, raised in parliament, mentioned in the press and unfortunately was passed off, as yet another regrettable hardship of post war Northern Sri Lanka.
The Sinhala polity was generally silent when the recipients of violence were Tamil democratic politicians from the North. Now the same situation has been repeated in the heart of the Sinhala South. The elected political opposition, in a country with a proud democratic history and a government which likes to insist that there exists effective domestic institutions and processes to deal with all ills,  obviously cannot visit Sinhala areas in the country’s south. What was happening in the North previously has now extended to the South. The assaults on the democratic freedoms of the Tamil opposition MPs in the North has now been extended to Sinhala opposition MPs in the South.
High Security Zones and the Police Spokesman
As a former presidential spokesman, I have been amazed at current official state institution spokespersons brazen ability to dispense with factual accuracy, consistency, sometimes plain decency or plausibility when presenting official state responses to matters of public importance. Accordingly in the past, we have had police spokespersons make jokes about white vans, claim they have no information of attacks on religious minorities (when it is there for all to see on YouTube), the then Attorney General claim that disappeared journalist Prageeth Ekneligoda was living abroad and then claim in Court that only God almighty would really know that. However in the current situation, the usual excuses by the government spokesmen will not suffice. There is a complaint, there is photographic evidence, there are corroborating witnesses and there is an alleged lethal weapon (or the novel defense that it is a toy gun). Really His Worship the Lord Mayor of Hambantota should stop playing with such toys.
The Mayor who first put all responsibility for his actions to a directive to him by MP, Namal Rajapaksa has subsequently, when it became apparent that the Sinhala south was reacting negatively to the attack, retracted, that he received a phone call from the young MP and has taken full personal responsibility for his actions. Of course a check on his phone logs will reveal the truth, which should be ascertained. If he did receive instructions from anyone else, then there was a pre meditated conspiracy to attack.
Anyway, the incident raises some very important questions to which the government should be held to account.
1.       The first is that the environs of a national airport and sea port are high security zones, with tight security, which anyone who has passed through either of such places would know only too well.

Sri Lanka is South Asia’s most militarized society, where with close upon four hundred thousand personnel in the law enforcement and security services, we have the highest per capita security personnel to civilian ratio in South Asia, according to various independent international security publications, including the Jane’s Defense Review. Despite this there was a serious breach of security.

2.       Secondly the Mayor of Hambantota runs around brandishing firearms or toy pistols according to him, for the express purpose, supposedly of maintaining law and order in Hambanthota. Somebody should really inform the first citizen of Hambantota, that according to the Sri Lankan Constitution, the Attorney General’s Department and all relevant statutory provisions, law and order is the preserve of the police and of course under public security ordinance in force throughout the country, also the security forces, but certainly not those of elected local bodies, municipal, urban or Pradeshiya Sabhas. Mayor Fernando should read the Municipal Council Ordinance, to understand his powers, duties and responsibilities. What would happen for instance if TNA mayors and UC chairmen ran around the North with toy guns, the BBS, the JHU and NFF would have a fit.

3.       Thirdly, the police have as this article is being written yet to question Mayor Eraj Fernando. This despite the fact, that he is a suspect in an attack on no less than five elected representatives of the sovereign people of Sri Lanka. One almost pities the police under the 18thamendment.

The UNP goes international
The United National Party (UNP), generally an opposition that acts more like a party supporting the government but from the outside, sprang into some sort of action in defense of its MPs. But its statements and actions were telling. The UNP stated that the goon attack on its MPs in broad daylight in high security zones lends credence to the international community’s charges against the Rajapaksa regime in the UNHRC in Geneva and thereafter the UNP complained to the international Inter Parliamentary Union. In both cases the UNP’s response was linked to the outside world, demonstrating its own assessment of the lack of an effective domestic remedy for the assault on democratic opposition. The likely police whitewash in the next few days, will only confirm that assessment. If the main democratic opposition UNP believes it has no avenue for redress from within the Sri Lankan State, then we now have only the regime insisting on the efficacy of domestic remedies. No one buys it in Geneva; they don’t buy it at Sirikotha; they don’t buy it in the Northern Provincial Council and they don’t buy it in the Sri Lanka Muslim Congress. The only insistence of its existence is in the corridors of power of the Rajapaksa administration and it is increasingly sounding hollow.