Tough new regulations under PTA to deal with extremist groups 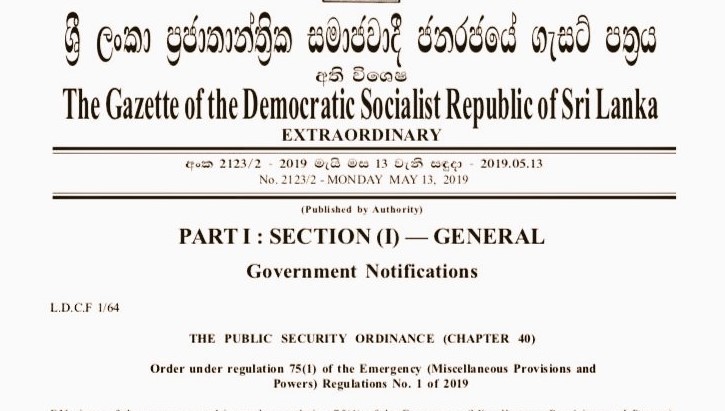 President promulgates PTA (Proscription of Extremist Organisations) Regulations.
Will apply to three groups proscribed under Emergency Regulations.
Regulations prohibit all links to groups including funding & espousing their cause.
Maximum of 20 years imprisonment for violators of new regulations.

Along with the proscription of three organisations linked to the Easter Sunday bomb attacks, President Maithripala Sirisena has promulgated tough new regulations under the Prevention of Terrorism (PTA) Act to deal with those having links to these groups, including those funding them and espousing their cause.

The Regulations, cited as the Prevention of Terrorism (Proscription of Extremist Organisations) Regulations No 1 of 2019, were made by President Sirisena, along with newly promulgated Emergency Regulations, proscribing the National Thowheed Jama’ath (NTJ), Jama’athe Milla’athe Ibrahim (JMI) and the Willayath As-Seylani.

The new regulations also prohibit wearing, displaying, hoisting or possessing any uniform, dress, symbol, emblem, or flag of these groups.

The Regulations gives powers to the President for the forfeiture to the state of moneys, securities or credits which are being used or are intended to be used, for the purposes of the proscribed organisations. Such an order made by the President will be final and conclusive and shall not be called in question in any court by way of writ or otherwise.

In instances where an offence is committed by a body of persons, such as a partnership or a firm, then, in addition to the persons directly responsible, those responsible for the management and control of such body, group or organisation, will be deemed guilty of an offence.

Those who act in the contravention of these regulations can face up to 20 years imprisonment after conviction by the High Court for the Western Province.

The new regulations will not affect the right of an international organisation which has entered into an agreement with the Government of Sri Lanka, to engage in any activity connected with the rendering of humanitarian assistance.

The new regulations were published in the Gazette on Monday.