Torture, Threats and Harassment against Podikumarihami and her family by the Mahiyangana Police 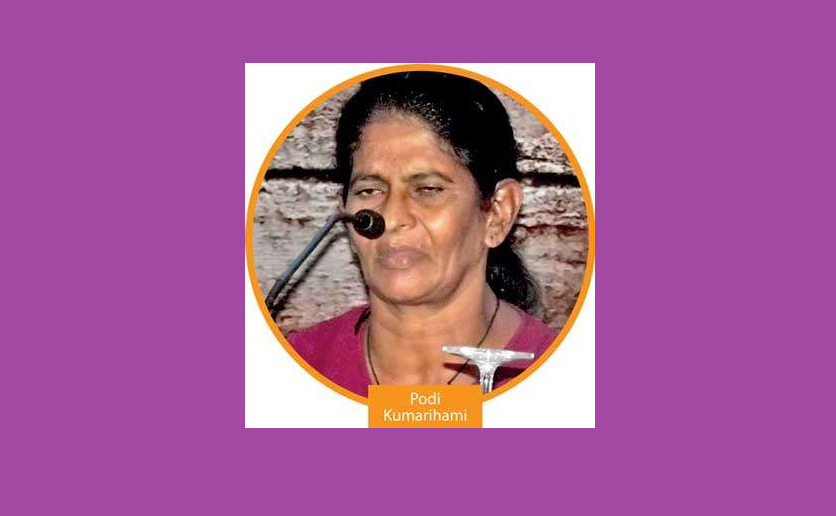 We the undersigned activists and civil society organisations condemn the continuous attacks, threats, persecution and torture against Podikumarihami and her family by the Mahiyanganaya police. We also strongly condemn the failure by the State including senior police authorities, independent commissions, the Attorney General and the judiciary to ensure effective protection for Podikumarihami and her family and hold those responsible accountable for their actions.

Podikumarhihami is a 50 year old mother of five children, the youngest aged 19 and 13 years. She is a street vendor who earns her living by selling coconuts, beetle leaf and other produce in Poojanagaraya, Mahiyangananaya, in the Badulla District of Sri Lanka. Since around 2006 Podikumarihami has faced serious and continuous violence and harassment by the police compelling her to give up the land which she owns so the police could profit by illegal sand mining in the area.

Podikumarihiami and her son have been arrested several times on false charges and beaten by the Mahiyangana police. On 05th of November 2017, her son, Sumesh, who was 17 years old at the time was severely tortured inside the Mahiyangana Police Station and hospitalized as a result of his injuries. The local Magistrate who was informed of the torture, refused to take action against the police and instead warned Podikumarihami that if she didn’t respect the police, the magistrate (was is married to a senior police officer), will teach her a lesson. Podikumarihami was later arrested on a baseless charge of failing to wear white attire to court and remanded for 14 days. The criminal case against her continues to date and she has been warned by the Magistrate not to retain any lawyer from the Mahiyangana bar and to represent herself.

In the most recent incident, on 15th August 2017, the Mahiyangana police attempted to arrest Podikumarihami from her residence and when she refused on account of a women officer not being present, they beat her and tried to force her into the vehicle. The police also severely beat her son-in-law, Asanka Dilshan who rushed to her aid. They threatened that they would find drugs at Dilshan’s house before the end of the day.

At around 4.30 pm on 17th August, a team of police officers from the Mahiyangana police, searched Podikumarihami’s and Dilshan’s houses, in their presence, and failed to locate drugs. The police conducted a second search at around 6 pm and on this occasion, family members were prevented from entering the house/being present during the search. However Podikumarihami who was looking through a window, saw the police plant a parcel (purportedly of illicit drugs) inside a brown cupboard in Dilshan’s house and inside a laundry bin at her house. The police ignored her objections that the drugs were illegally planted and arrested Podikumarihami and Dilshan that day. Podikumarihami was released on bail the following day and Asanka Dilshan was remanded on fabricated charges.

On 17th August 2017, at around 02.30 pm, a team of police officers entered Podikumarihami’s compound and attempted to arrest her daughter (Chamila Malkanthi). When she objected to the arrest, the Officer in Charge (OIC) of the Mahiyangana Police slapped Podikumarihami to the ground and repeatedly kicked her in the stomach, chest and arms with his boots. When she knelt before him and begged not to arrest her daughter on false charges, the OIC kicked her in the back and two officers Senadheera and Wimalasena caught her by the hair and flung her head against the wall. The police threatened to shoot Podikumarihami if she complained about the attack. On 20th August 2017, Podikumarihami was summoned to the Mahiyangana Police Station and warned not to pursue any complaints against the police.

Despite these threats, Podikumarihami filed a complaint the Human Rights Commission of Sri Lanka (HRCSL) bearing No. HRC/BD/147/17 and an inquiry was scheduled for 27th November 2017. On the date of the inquiry, Podikumarihami’s son, Sumesh, was arrested by the Mahiyangana police on false charges, in a clear act of reprisal. Although no drugs were found on his possession, the OIC of the Mahiyangana police announced that he would plant drugs on Sumesh. The OIC also directed a woman police officer to plant drugs on Podikumarihami and arrest her, although no officer stepped forward to do this. Under pressure from the police and due to lack of legal representation, Sumesh has since pleaded guilty to possession of 900 grams of heroin before the Mahiyangana Magistrate.

Podikumarihami has complained against the Mahiyangana police to the Attorney General (AG), and the National Police Commission (NPC) by letters dated 17.11.2017. She has also filed further complaints dated 23.11.2017 to the HRCSL, DIG (Badulla), NPC, Special Investigation Unit (SIU), and the AG, against actions of the Mahiyangana Police. Podikumarihami is informed that the police SIU has completed an inquiry into the incident of torture on 17.08.2017 and referred the case to the AG for framing charges, under the Torture Act. A fundamental rights application bearing No: SCFR 184/2018 is also pending before the Supreme Court.

Despite the measures by the SIU and the AG and the support of lawyers and civil society activists in the area, the Mahiyanaga police continue their campaign of harassment and threats against Podikumarihamy, pressuring her to withdraw all complaints against the police. The actions of the Sri Lanka Police have compromised the safety of Podikumarihamy and her family, violated their right peace, security and dignity, impact her son’s education and compromised her ability to earn a livelihood and support her family.

We call on the Sri Lankan State to ensure effective protection and redress for Podikumarihami and accountability for those responsible by;