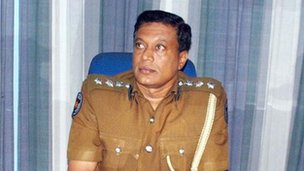 One of Sri Lanka’s most senior police officers has been arrested under terrorism laws over the murder of a businessman in Colombo.

Deputy Inspector-General Vaas Gunawardena has been given a 90-day detention order.

He is suspected of involvement in the alleged contract killing of Mohamed Shiyam in Colombo three weeks ago.

Mr Shiyam’s body was found mutilated and with gunshot wounds in a rural area near the capital.

The BBC’s Charles Haviland, in Colombo, says the authorities very rarely carry through investigations implicating such senior officials or policemen.

Mr Shiyam, a father of three involved in the footwear business, had gone missing after dining with a friend named as M Fouzdeen in a Colombo suburb.

CCTV evidence was used to implicate Mr Fouzdeen in the case.

He was arrested and is said to have confessed to arranging a contract killing carried out by a group of police.

Only after that did the victim’s family learn of his fate.

Local media report that Mr Fouzdeen alleged the involvement of a middleman “known to associate with many high-ranking police officers”.

The Criminal Investigation Department (CID) says it is holding Mr Gunawardena on charges including murder for financial gain and conspiracy to kill.

Several of his subordinate police are also being held and two weapons from his office have been impounded.

The brother-in-law of the victim is believed to be a close friend of President Mahinda Rajapaksa.

After the president ordered swift action on the case it was taken up by the CID.

Mr Gunawardena was already a controversial figure after he and his family were accused of assaulting a student in 2009.

The student, Nipuna Ramanayake, has cases pending at the Supreme Court and the Appeal Court concerning the incident.

Mr Gunawardena and his family deny the accusations.