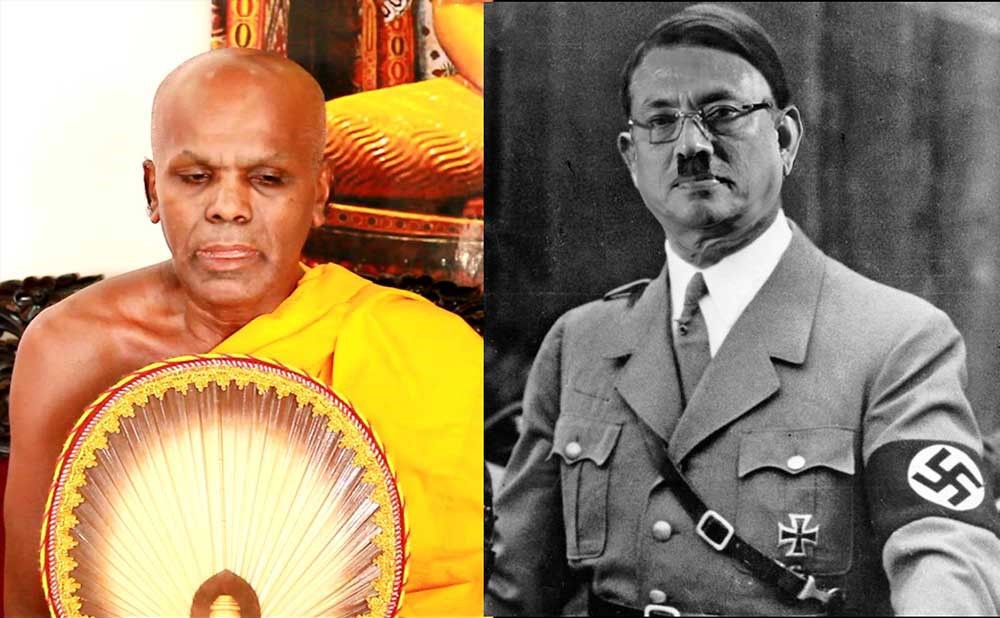 (Jun 21, 2018, ECONOMYNEXT ) A top Buddhist monk has asked Sri Lanka’s former defence secretary Gotabhaya Rajapaksa to become another “ Hitler” who is known to have killed up to six million Jews in the Holocaust.

A chief priest of the Asgiriya chapter, Venduruwe Upali, blessed Rajapaksa on his 69th birthday Wednesday by encouraging him to return to power and “rebuild the country” even if it means establishing military.

The monk, delivering a sermon at the private home of Rajapaksa, prayed that the youngest among the Rajapaksa siblings should be the next leader of Sri Lanka as the country needed a “Sinhala Buddhist leader.”

“As the clergy, we feel the country needs a religious leader… Some people have described you as a Hitler,” the venerable monk said referring to Gotabhaya Rajapaksa. “Be a Hitler. Go with the military and take the leadership of this country.”

The monk claimed that crime had increased in the country and he felt Sri Lanka needed a new leadership of a Sinhala-Buddhist individual. He was happy that Gotabhaya has thrown himself into contention to be the next president of Sri Lanka.

“With the blessings of Mahinda Rajapaksa, people aspire to have Gotabhaya Rajapaksa as a presidential candidate and lead this country,” the monk said in the presence of Basil and Chamal – both brothers who are also regarded as presidential hopefuls.

Venerable Upali, who is a number two in the Buddhist hierarchy in the Asgiriya chapter, made it plain that he preferred Gotabhaya to any other Rajapaksa sibling.

His reputation notwithstanding as the architect of the notorious “white van” kidnappings, the monk felt that Gotabhaya Rajapaksa would be a “religious leader, a Buddhist leader and a Sinhala leader.”

Political observers have said Mahinda Rajapaksa’s 2015 defeat was partly due to Gotabhaya’s attempt to project a strong nationalist image and his dalliance with the extremist Bodu Bala Sena (BBS) which was accused of instigating hate attacks against minority Muslims.

Gotabhaya and his then army chief Sarath Fonseka have blamed each other for the kidnappings and a string of extra judicial killings.

He faces several criminal investigations, but has obtained a Supreme Court order preventing his arrest pending a court hearing in his original petition against possible arrest.

The courts have been putting off the hearing with four judges recusing themselves despite one of them granting the initial order preventing his arrest. (COLOMBO, June 21, 2018)