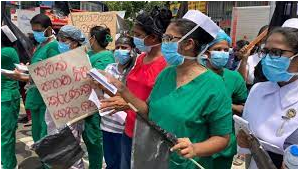 The state health sector, grappling with a serious shortage of medicines, will be plunged into further crisis in the New Year with the compulsory retirement of specialists at the age of 60 years and the outward migration by young specialists, warned many experts.

A red alert is being issued that specialties such as cardiothoracic surgery would die off in Sri Lanka by the end of this decade with this double-hit.

It is much worse than the fertiliser issue, top doctors cautioned, as food can be imported when crops fail. However, the irreparable harm to the state health sector due to a dearth of specialists would lead to its agonising death.

Life-saving heart surgeries and maternal health are just two of the crucial specialties being cited as examples.

A doctor who has done an analysis pointed out that the present cadre of Consultant Cardiothoracic Surgeons is 27. However, there are only 18 Consultants currently in five hospitals across the country. They operate from the National Hospital of Sri Lanka (NHSL), the Kandy National Hospital, the Karapitiya Teaching Hospital, the Jaffna Teaching Hospital and the Lady Ridgeway Hospital (LRH) for Children, Colombo.

“Seven Consultant Cardiothoracic Surgeons will retire this year (2023) under the 60-year rule, while one is due to migrate. This leaves only 10 Consultant Cardiothoracic Surgeons for 22 million people,” she said, adding that from among the post-graduate trainees in this specialty, one who returned to Sri Lanka has migrated, while two others have unofficially indicated that they would not be coming back to the country.

Chilling disclosure: All five VOGs of the Castle Street Hospital will be retiring this year (file pic)

“The workload of each unit headed by a Cardiothoracic Surgeon includes all referrals from Cardiologists for the performance of surgeries. These include emergency cardiac surgery, emergency trauma surgery, thoracic surgery and routine surgeries. This is while the unit also provides surgical cover for procedures conducted by Cardiologists,” he said, stressing that with the exit of another eight Cardiothoracic Surgeons, only 10 units would be able to function.

Looking at the current long waiting lists for routine heart surgeries, he says there are thousands of patients who have to languish over two years before their operations are done. Sadly about 10-15% of them die while waiting. When hospital staff calls them, the patients are no more. The waiting lists are due to a dearth of surgeons and also a lack of facilities. The critical question that arises now is whether some cardiothoracic units would be forced to shut down and if so, which ones that would be. This would lead to more deaths.

Cardiovascular disease is the No. 1 cause of death not only in the world but also in Sri Lanka.

Focusing on maternal health, the analyst-doctor said Sri Lanka is highly commended for recording the lowest Maternal Mortality Rate (MMR) in Southeast Asia with minimal resources. However, the proud record of this country which is being held up as a model by the World Health Organization (WHO), would soon change adversely.

The low MMR of 29 mothers dying per 100,000 live births is due to 99.5% of childbirths taking place in hospital, under the 24-hour expertise of Consultant Obstetricians and Gynaecologists, she said.

“The 2015 Cabinet-approved cadre of Consultant Obstetricians and Gynaecologists, commonly known as Visiting Obstetricians and Gynaecologists (VOGs) for 2024, is 226. But in service at present, there are only 144 VOGs, which creates a deficit of 134,” says this doctor, who declined to be named due to a Health Ministry ruling that no one should speak to the media without ministry permission.

She points out that according to the Annual Transfer List for 2023, there are 32 vacancies, some being filled by doctors such as Senior Registrars (SRs) or Resident VOGs who are in non-Consultant grades. With the interim budget proposal bringing in the 60-year retirement age, 21 VOGs would be leaving the state health sector this year. This would result in 53 vacancies across the country for the vital sector of maternal healthcare.

“There are 10 board-certified VOGs awaiting appointments to fill these vacancies. But even after, there would be 43 unfilled vacancies in 2023,” she says, stressing that it would severely impact maternity care in Sri Lanka. This could even result in an increase in maternal mortality (death) and morbidity.

Another source added that already three VOGs have retired (last year/2022) and expressed serious concerns that some state hospitals such as B-grade Base Hospitals may even have to close their labour rooms for want of VOGs. This is while a single VOG would be compelled to man A-grade Base Hospitals, placing a heavy burden of 24-hour care of mothers on him/her. As anyone knows, for a single VOG to give 24-hour care would be an impossible task invariably leading to issues.

Many were of the view that while retirement at 60 years is one side of the coin, the other being the brain drain of young Consultants, leaving the country in search of a better life due to the economic crisis.

“It is a double-hit, like a tree being lopped off at the top (retirement) and the roots (younger Consultants) moving out. Udin kapanawa, yatin yanawa. So what will happen to the tree? It will collapse and this is the fate of the state health sector this year. Why cannot the politicians and bureaucrats understand this simple logic,” asked a source