Too many Rajapaksas, too long too? – N. Sathiya Moorthy 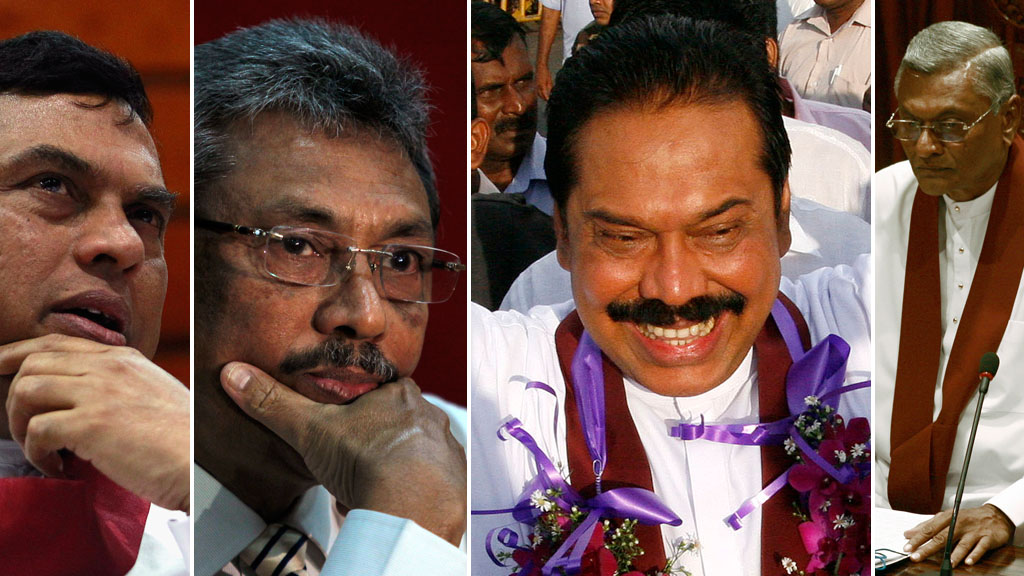 Can he, can’t he? That’s the question. The 19th Amendment issue on the possibility of Mahinda Rajapaksa contesting the presidential polls has turned national attention on the man all over again, even to the exclusion of brother, Gotabaya Rajapaksa, the war-victorious Defence Secretary, who was being marketed as the replacement, in-between. Independent of what his SLPP-JO followers may say, repeated over-exposure and attendant controversies of every kind can cut both ways, even if either or both of them become qualified to contest.

For Mahinda, it is now being argued that the 19th Amendment that restored the two-term constitutional upper-limit for presidency, would not apply to him. So, would it be to his predecessor Chandrika Bandaranaike Kumaratunga, the Rajapaksa camp has been charitable enough to submit in her favour.

Imagine a situation in which the two contest each other.

Chandrika Bandaranaike Kumaratunga, of course, as the candidate of the present-day ruling combine, and the picture is complete. It would of course be a repeat of the previous two presidential polls, where the combined Opposition of the time demonstrated that none of them could take on Mahinda Rajapaksa on their own. In the second attempt, they actually defeated him despite the 18th Amendment protection Mahinda had given himself to try and stay on for a third term.

‘Spirit’ of the Constitution

Does it mean that Mahinda is actually a ‘spent force’? If so, why is the SLPP-JO pining for him? If not, why all this sudden talk of moving the Supreme Court for clarifying whether the 19th Amendment has a retrospective effect or not? If there is no retrospective effect to the restoration of the two-term upper-limit, then alone Mahinda (and by extension Chandrika Bandaranaike Kumaratunga) could contest the elections, if they wanted. Otherwise, it is a firm ‘no.’

Independent of what the Supreme Court may have to say, if and when moved, to the ordinary voter, it may still be the ‘spirit’ of the Constitution and the restorative 19th Amendment would matter more. Minus the current controversy, maybe freedom for Mahinda to contest again may not become the campaign-platform, but without it, the non-committed voter pool, from which the Rajapaksas would still have to draw their victory margin?

Such a construct pre-supposes that the Rajapaksas would be able to retain the 45 per cent vote-share that they had polled thrice in as many years, namely, the presidential and parliamentary polls, both in 2015, which again they retained for another three years, up to the Local Government (LG) Elections, earlier this year. Through these three outings, they also could not make that extra 5-7 per cent vote-share on all three occasions.

It was only in the absence of that ‘minor share’ that Mahinda could not make it to the presidency a third time. The rest, including the 19th Amendment followed. Even the LG Poll results showed up as much. If the idea thus is for the SLPP-JO to hope that Mahinda alone could make the difference, then, the current controversy needed avoiding, from the start.

What’s more, they need to attract these many voters only from the pool that was opposed to the Rajapaksas’ ways of governance and politics!

There may be some truth in Mahinda’s claim that the incumbent government is resorting to ‘political vindictiveness.’ There may still be differences and distinctions in details, as far as specific cases and speciality approaches in investigations may be concerned.

There can be no questioning of the legitimacy or the credibility of the ‘Special Courts’ appointed under a fast-track law, to fast-track criminal cases, especially from Mahinda’s term as President. However, it is anybody’s guess why this Government has not thought of bringing other criminal cases, including that of the ‘Bond Scam’ kind before those Special High Courts, or date it back to the pre-Rajapaksa regime.

It is nobody’s case that the incumbent political leadership of the Government should not go after the Rajapaksas, especially since that was their electoral plank twice in 2015. They won both and their constituencies expected them to deliver on the promises.

The problem, however, is the delays that the Government too seemed to have engineered in fast-tracking these very same cases, investigations and prosecutions. It is not clear if the delay owed to a perception that they would need the Rajapaksas around on the other side of the electoral fence, and needed to ‘fix’ them, for winning polls five years hence.

The more plausible cause for the fast-tracking seems to be the Mahinda-led SLPP-JO’s big victory in the Local Government Poll of February this year. Either way, the fast-tracking of the criminal cases against the Rajapaksas is not innocent and borne out of any honesty of purpose.

For close to a decade and a half, the Rajapaksas have been on both sides of the news, positive and negative, when in office and out of it. However, they cannot just now blame the social media, including motivated political campaigns on the medium possibly launched by their adversaries, if they are always on the ‘other side’ of the news.

There are one too many Rajapaksas in public life, and too much of news (only) about them, all the time. So much so very few Sri Lankans knew and fewer remembered that there was a quieter sole back home, Chandra Rajapaksa, the 70-year-old younger brother of Mahinda Rajapaksa, until he breathed his last in native Tangalle, on Tuesday, 21 August.

Time was not many weeks ago when there were clear hints that Mahinda’s other brother, Gotabaya Rajapaksa, was being considered for the presidential poll, if only to circumvent the 19th Amendment restriction on the former. Gota only added fuel to the fire by declaring that he would consider giving up American citizenship (only) if he was first promised the presidential ticket, if not the seat. Today, no one, including Gota, is talking about Gota for presidency.

The idea seemed to be that Gota could get elected as President, and Mahinda, like Vladimir Putin, in distant Russia, could become Prime Minister. The question whether the Constitution would be amended, to withdraw Executive powers from the President and confer it on the Prime Minister remained unanswered.

Through this discourse, no one from the Rajapaksa camp seemed to have considered the possibility of either or both the brothers not being able to make it in the elections. The worse scenario is Gota becoming President and the SLPP-JO combine being unable to obtain parliamentary majority, for Mahinda Rajapaksa to become Prime Minister.

In between came another ghost, in the form of Gota’s American citizenship. There again, the question of possible refusal by the US to accept his surrender of citizenship became the issue. Once again, there was the question of Gota having to move Sri Lankan Courts, just as it has been suggested for Mahinda or a voter (on his behalf) seeking the required judicial clarification on the 19th Amendment.

Inalienable right or what

Maybe Minister Wijeyadasa Rajapakshe is right when he says that under the Constitution, the President alone can seek the ‘opinion’ of the Supreme Court on constitutional matters. In contrast, Mahinda or a voter on his behalf, saying his franchise had been neutralised/challenged, if and only when the Election Commission had rejected the former’s nomination, citing the 19th Amendment.

The same may be the case for Gota and his American citizenship. Here again, the 19th Amendment clause/clarification, barring Sri Lankans with ‘dual citizenship’ from contesting the presidency was aimed only at denying Gota his place in the sun, just as other provisions barred Mahinda from contesting a fourth time (after the 2015 defeat). Thus, Sri Lanka’s 19th Amendment may be the only constitutional provision anywhere in the world that is aimed at denying any two/three siblings from occupying that very Nation’s highest elected office.

That way, unless there is a specific provision for Gota having to register his surrender of American citizenship in a Sri Lankan Court, there is no way he or anyone on his behalf could move the Supreme Court for the purpose. The challenge could come up if and only if the Election Commission rejected his nomination, if and when filed.

Even keeping Mahinda’s parliamentarian-son Namal out of the discourse just now, there are two other Rajapaksa siblings that are also in public. Of them, the eldest one, Chamal Rajapaksa’s name has been the social media alternative to Mahinda and Gota, especially if either of them is unable to contest the presidency. The fourth one, Basil Rajapaksa is also a US citizen, but neither he, nor any section of the SLPP-JO or the social media has put up his name as a presidential candidate. To him also applies the ‘foreigner’ clause in the 19th Amendment.

In this background, it is one thing for a Rajapaksa to stake his claim to become the Nation’s President, and leave it to the voters to decide. They have every right to occupy that seat, as any other. Some may even argue that in the light of war-victory, they may have a greater lien still on the seat than most other politicians of the Nation.

But then, it is for the voters to say it, not for the Rajapaksas to claim it, as if it were an inalienable right, a problem in a democracy, not just for democracy, but for those presupposes of such a situation too. In this, overdoing the political vendetta card could well backfire on its perpetrators, not the Rajapaksas, but those in this Government, instead!

It is not without reason, for, a mere Special Court conviction and sentencing of one or many Rajapaksas cannot be the endgame for their electoral politics. These decisions have to go through the Appellate Judiciary, all the way up to the Supreme Court. In all those paths, the case could well rest, until after the polls are over.
About the author :
The writer is Director, Chennai Chapter of the Observer Research Foundation, the multi-disciplinary Indian public-policy think-tank, headquartered in New Delhi.
[email protected]