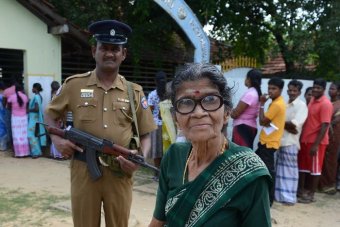 By South Asia correspondent Michael Edwards and wires
Sri Lanka’s main Tamil party has won the first local election to be held in the country’s north in the wake of decades of civil war.

The Tamil National Alliance (TNA) has secured 30 seats in the 38-member Northern Provincial Council.
A coalition of parties representing president Mahinda Rajapaksa won seven seats, while a Muslim party won one.
The vote comes four years after the army defeated Tamil Tiger rebels in the country’s civil war.
Defeat for the government, the most humiliating set-back for Mr Rajapaksa since he assumed office in 2005, is largely symbolic.

He has a majority of more than two-thirds in the national parliament and controls the eight other provinces.
But the TNA’s victory shows the defeat of the rebels in 2009 did nothing to dampen calls for autonomy among Tamils, who make up about 14 per cent of Sri Lanka’s 20 million people.

Dr Sam Pari from the Australian Tamil Congress says the result sends a very clear message that Tamil people do not see any viable solution being put forward for regime change.

“Stakeholders in Tamil affairs in the international community, the diaspora and in the island of Sri Lanka should realise the Tamil people have yet again proved that they are still supportive of self-rule and self-determination”.

The TNA won more than 84 per cent of the votes in Jaffna, once the heartland of the rebel movement, 81 per cent in Kilinochchi, the de-facto capital of the separatists, and 78 per cent in Mullaitivu, where thousands of civilians were said to have been killed in May 2009 when government forces moved in to defeat the rebels.

“It’s a great vindication of the political stand we’ve taken and our people have stood up without bowing down to violence and intimidation,” MA Sumanthiran, a TNA legislator, told the Reuters news agency.
“Now the president has to bow down to this verdict.”

A foreign observer said the election commission had done a very good job inside the polling centres, though it did not have any control over what went on outside, where some voters reported attacks and intimidation.

Complaints of intimidation of voters

The government has accused the TNA of renewing calls for a separate state through its push for the devolution of power. The TNA says it wants devolution in a united Sri Lanka, not a separate state.
Many voters have called for the return of land that they say the army has occupied. The are also calling for the withdrawal from the north of the army, which was accused of human rights abuses in the final stages of the war.

Some voters have also called for a separate state, for decades the goal of the Liberation Tigers of Tamil Eelam, who launched their war in 1983 to end what Tamil activists saw as systematic discrimination by Sri Lanka’s Sinhalese majority.

Election officials said they received “plenty” of complaints, including complaints of intimidation of voters during the polling, but turnout was about 68 per cent.

The military has rejected any suggestion of involvement by the security forces in election-related violence of any sort.

The president has faced international pressure to bring to book those accused of war crimes committed at the end of the war and to boost reconciliation efforts.

His government has rejected accusations of rights abuses and Mr Rajapaksa in July ordered an inquiry into mass disappearances, mostly of Tamils, at the end of the war.
ABC/Reuters