“In the past the United States and India stood against us. However, in the favourable circumstances that have now come about, the United States and India are to a great extent supporting our position”
-Sampanthan (2012) at ITAK Convention-
R.Sampanthan’s road map of a long march to bifurcate Sri Lanka is routed through New Delhi. Craftily navigating in troubled waters the destination, he seeks, is called Point Federal. That veiled name board is unspoken and unseen in his script. In TNA’s vocabulary Federalism is a prohibited word, they opt not to utter, since the 13th Amendment will carry them nearly the same distance legitimately through an Indian rope trick. 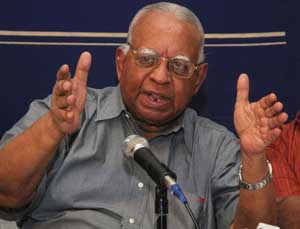 “F” word, if used by ITAK/TNA, after frolicking with terrorists can turn sleeping dogs into infuriated bulls, unhealthy for their long term project. Instead an exocet is unleashed with a saccharine call for “patience”- endgame culminating in civil disobedience. No friendly hand is extended to reconciliation which is anathema to separatist tendencies. The traditional person –to-person, Sinhala –Tamil amity that exists, outside the political sphere, is a national treasure which should be a building block but a red rag to the separatist movement that favour reciprocal hostilities. Federal Party discarded its name card- yet the concept remains camouflaged in the TNA’s operational manual. 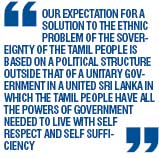 An inflated 13th amendment is the short cut to a federal state – bluffed as a minimal negotiating chip: in truth, the desired maximum travelling distance for the present. “Our expectation for a solution to the ethnic problem of the sovereignty of the Tamil people is based on a political structure outside that of a unitary government in a united Sri Lanka in which the Tamil people have all the powers of government needed to live with self respect and self sufficiency”- Sampanthan (2012)]. Content is of great value to intelligence outfits than the material flowing from a thousand observation towers. TNA hopes to cross the Palk Strait and reach New Delhi through Tamil Nadu to enjoy the fruits of the 13th Amendment, hoping Sri Lanka will foul its relationships with America. “However using the intervention of India to our benefit, together with its assistance and blessing, we grasped an opportunity to arrive at a political solution that would enable us to live with dignity within a united Sri Lanka” -Sampanthan (2012)].

To be on a collision course with America is to make it comfortable for India/RAW to influence US against us. ITAK strategists look at the gateway of India as the stepping stone to access America. They know India is now travelling on the pillion of an American motor cycle. The hidden agenda in the Sampanthan Papers is to dismantle the unitary state- a small step for the separatist cause but a giant leap for the divisive forces. A slide down the slippery slope will begin with the call for the full implementation of the 13th Amendment introduced by J.R. Jayewardene’s Indo-Sri Lanka Pact. It opens the avenue for fissiparous tendencies.
ITAK/TNA chief, fortunately, outlined the divisive strategy before its live take-off! Fancy, Prabhakaran issuing a video revealing terror tactics prior to assembling his forces? He makes a compelling case for the Defence Forces to remain in positions of strength in the North. Sri Lanka has to place road blocks on the proposed circuitous path to Eelam through federalism. Nevertheless it has helped to immobilize the southern wing of the Opposition from lending any side support after Sampanthan’s treacherous cry for distinct and separate homelands for Tamils and Sinhalese, with an envisaged merger of the North/East. “…just as you live in this country, in your traditional homelands using the authority due to you, we want to live in this country in our traditional homelands with the authority due to us”- Sampanthan (2012)].

India by inveigling us to travel along the 13th Amendment is hoping to build a political causeway to the North/East and hold a grateful TNA tied in knots in its kangaroo pouch.The stumbling block in extracting police and land powers under the 13th amendment are the Rajapakse brothers Mahinda and Gotabaya. India would not mind a limited regime change in Sri Lanka and will covertly access the West to initiate the transition while India will play its traditional outwardly passive role. Sampanthan’s cheerleaders waiting to drive the Indo-American combine are the Diaspora and Tamil Nadu.Government tacitly assists the TNA by being sluggish to attend to Tamil grievances outlined in the interim/LLRC reports. If attended expeditiously with sincerity, the sting will be taken away from the proposed TNA campaign.

Closest we came to absorb a federal state was at the Oslo Accord entered into between G.L. Peiris for the UNP and Anton Balasingham for the LTTE.

Thankfully, Prabhakaran scuttled it- unwittingly and unconsciously- he often was his own destroyer.