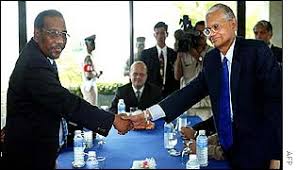 Image: Anton Balasingham of the LTTE and then Foreign Minister G. L. Peiris at peace talks.

The Tamil National Alliance (TNA) in its manifesto for the forthcoming local government election said that that the solution it seeks with regard to the ethnic problem in Sri Lanka was similar to what was in the Oslo Declaration. This was the joint declaration by the representatives of the then UNF government and the LTTE at the third round of peace talks between the two parties in 2002.

The UNF delegation headed by Professor G. L. Peiris and the LTTE delegation led by its political wing head S. P. Thamilchelvan agreed in the Norwegian Capital Oslo in November/December, 2002 to “explore a political solution founded on internal self-determination based on a federal structure within a united Sri Lanka.”

The TNA manifesto said that the same policy framework was placed before the people at the 2013 Northern Provincial Council election and the Parliamentary election in August 2015.

It further said that one of the significant objectives of the forthcoming LG elections was to show the people of this country as well as the international community on whom the people in the North as well as the South have reposed their trust.

Criticizing the opposition to the interim report of the Steering Committee of the Constitutional Assembly by groups in the North and the South, the Tamil coalition says that it was not a final solution, rather it was a document to be discussed.

While pointing to the extent of lands that had been released by the army after the new government came to power as a result of the pressure it had exerted, the TNA says it would continue to exert more pressure on the government with the assistance of the international community to get the remaining lands under the control of the army released as well. (M.S.M.Ayub) / DM