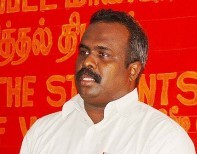 Tamil National Alliance yesterday called upon the international community, especially the US and India, to terminate their assistance to Sri Lanka until the government comes up with a political solution to the national problem.

TNA Wanni District Parliamentarian Selvam Adaikkalanathan, participating in the third reading stage debate on budget 2013, urged the international community, led by India and the USA, to force President Mahinda Rajapaksa and his government to accelerate the finding of a solution to the national problem within the next year.

“The government has a two third majority in Parliament and the President has more powers, thus it is incumbent upon President to resolve this matter. We believe that he could do it. We came to the democratic path with a hope that our problems will be solved but it has not been realized as yet. Our people do not want development they want a solution. If they want development they would have surely voted for the government but they chose us instead,” Adaikalanathan said.

He said even though people voted for him he could not do anything in return for them thus he was willing to sacrifice his own life to achieve a solution.

“I take this opportunity to pay my tribute to those who sacrificed their lives for a cause they believed worthwhile. Due to orders carried out from AC rooms members of the military too had to sacrifice their lives for the country. After all those sacrifices our people are yet to achieve a lasting solution. I was a militant and even during that time my life was safe even though there were instances when it came closer to death. Therefore, I believe am living on a bonus given by the God and it would be worthwhile if this life would be made a sacrifice in a bid to solve problems of my people,” the MP said.

He threatened to launch a fast unto death campaign if the government failed to give a solution to the national problem next year.
by Saman Indrajith
IS