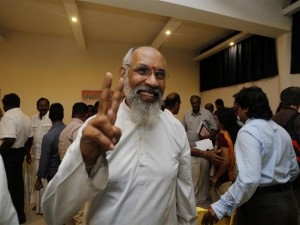 The Tamil National Alliance (TNA) has told Northern Province Chief Minister (CM) C.V. Wigneswaran to boycott the Commonwealth Heads of Government Meeting (CHOGM).
Constituent parties of the TNA had reached a conclusion that the party must boycott the summit and the stand has been officially communicated to Wigneswaran.
A three hour discussion was held between the constituent parties of the TNA last evening where the future of the Northern Provincial Council and other political issues were discussed.

C.V. Wigneswaran, who was also at the meeting, was later told that he must boycott the all important summit which will take place in Colombo next month. (Colombo Gazette)