TNA says it attends PM’s meeting to extend our co-operation to the resolution of burning issues. 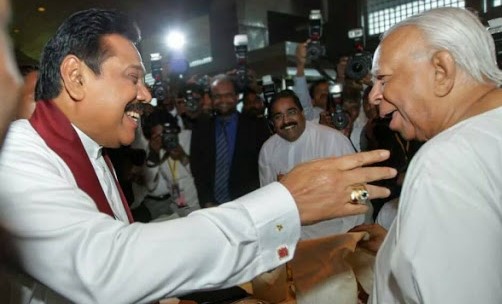 “We have decided that we need to attend the meeting with the Hon. Prime Minister, because all these issues outlined [in the letter] need to be addressed and to clearly indicate that we are prepared to extend our co-operation to the resolution of these issues in a reasonable and acceptable manner in the interests of the Country and all its People.” says TNA in a public statement.

1. An appeal was made by the Tamil National Alliance and other political parties to His Excellency the President for the dissolved Parliament to be reconvened. The response to this request thus far has been negative.

2. In this background the Hon. Prime Minister has invited all Members of the dissolved Parliament to a meeting at Temple Trees on Monday the 4th.

3. The country and the people are in a situation of grave crisis due to the following factors.

a. The Pandemic – the Corona Virus – has been gradually escalating – much more needs to be done to eradicate it completely from our Country, there is a legitimate fear amongst the people that it could further escalate with grave consequences, the Country’s united efforts are needed in this regard.

b. At all National Elections over the past twenty-five (25) years since 1994, over Five terms of both Parliament and Presidency, the people have in the exercise of their sovereignty – their franchise, rejected the 1978 constitution, and given a MANDATE for the enactment of a new constitution, encompassing all three components of their Sovereignty – Powers of Governance – including Legislative Executive and Judicial Power – FUNDAMENTAL RIGHTS and their FRANCHISE. This Mandate of the People in the exercise of their Sovereignty has not been fulfilled and the country continues to be governed under a constitution rejected by the People for over twenty-five years.

c. The Parliament elected in 2015 unanimously resolved to convert itself into a Committee of the whole Parliament – termed a Constitutional Assembly with a Steering Committee and sub committees in charge of different Subjects and an Experts Committee to formulate a new Constitution dealing primarily with three issues.

i. The Executive Presidency
ii. Electoral Reforms to Parliament.
iii. The National Question the Tamil Question – Sharing of Powers of Governance.

All political parties were represented in the several committees established, there was substantial consensus, Reports of the committees were filed in the Constitutional Assembly, the process reached its final stages, when it stalled until the dissolution of Parliament.

The National Question the sharing of the Powers of Governance, has since the enactment of the 13th Amendment to the Constitution, been addressed by all political parties and political Leaders and successive Governments since 1991 – and much progress has been made – Public commitments have been made to the Country and to the International community – in regard to how this issue would be addressed and concluded in an acceptable way. The support of the International Community was obtained on the basis of such commitments. These commitments have to be kept in the interests of national peace, regional peace and world peace. It would otherwise appear that the International Community was also deceived to betray the Tamil people who were the victims.

d. The worsening economic crisis the country is facing.

We have decided that we need to attend the Meeting with the Hon. Prime Minister, because all these issues outlined above need to be addressed and to clearly indicate that we are prepared to extend our co-operation to the resolution of these issues in a reasonable and acceptable manner in the interests of the Country and all its People.

However, we wish to emphasize that the meeting summoned by you is not and cannot be a substitute for convening the Parliament. We are of the firm view that the Parliament must be convened as stated in our joint statement to deal with several constitutional and legal issues that have arisen, which Parliament alone can deal with.