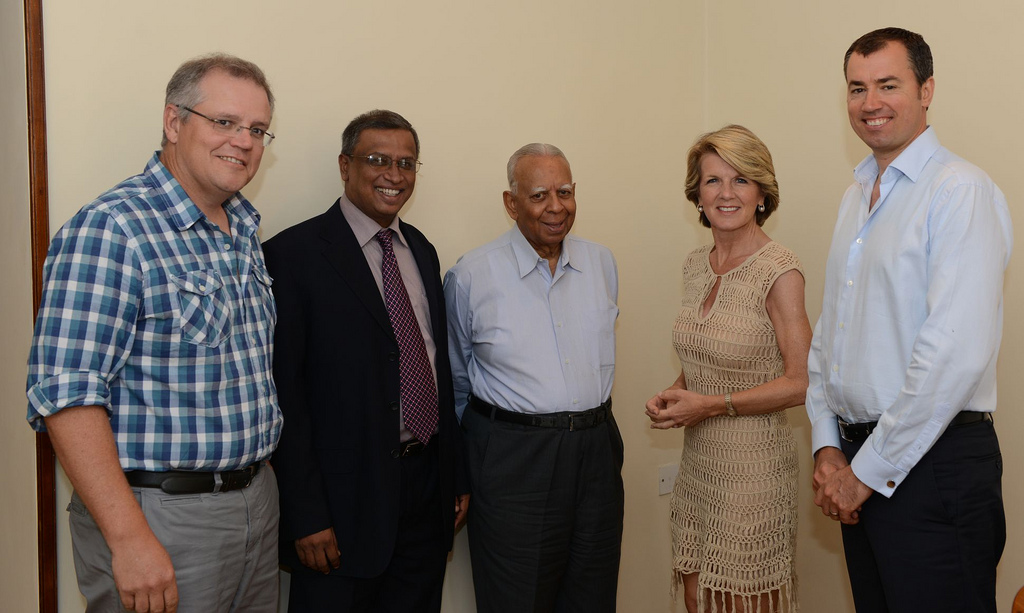 Latheef Farook
Political bankruptcy of Muslim parliamentarians was exposed by the Tamil National Alliance leader R Sampanthan and the TNA parliamentarian M.A. Sumanthiran when they raised the issue of growing disastrous hate Muslim campaign in the parliament.

As it is well known that there has been a wave of well planned attacks on the political, religious, cultural, economic life of Muslims in Sri Lanka. This campaign which started early last year with the destruction of a more than 400 year old Muslim shrine in Anuradhapura continues unabated with growing intensity.

Then came the attack on Dambulla Mosque followed by attacks on other mosques, threat to Muslim owned business establishments, calling Sinhalese to boycott Muslim business establishments, doctor trying to sterilize Muslim women in government hospital ,principal at Sinhalese school forcing Muslim children to kneel down and worship teachers, demonstrations carrying photos of pigs with Allah’s name in Arabic on it, arson attack led by monks on the Muslim owned textile outlet Fashion Bug and many more.

The shameful state of affairs is such that racist hooligans even attacked Muslim women wearing traditional hijab.

This disastrous and disgraceful ethno religious fascism has been unleashed by a handful of people who call themselves Buddhist monks and claim to preach Buddha’s message of peace and harmony. They also claim that these atrocities against Muslims have been done to save Buddhism and the Sinhalese community.

In many public meetings including the one at Kandy these monks openly incited Sinhalese against Muslims and even went to the extent of asking Sinhalese to boycott Muslim businesses .In Kurunegala those who purchased from Muslims shops were attacked with rotten eggs.

Growing senseless hate Muslim campaign and the failure of law enforcement authorities to take them to task have driven terror into the minds of Muslims who, living scattered in small groups amidst Sinhalese, spend sleepless nights.

All this vandalism had taken place under the watchful eyes of the police which is suppose to bring culprits to book and protect victims to ensure law and order. However in the case of these racist groups’ hooliganism police remained spectators while victims’ suffered humiliation with no one to turn to. The situation continues to deteriorate day by day with hooliganism riding high to the embarrassment of mainstream peace loving Buddhists whose minds have been being poisoned against the Muslims.

The situation is so precarious that Ven. Galkande Dhammananda Thero, a lecturer, Department of history, University of Kelaniya, told the website Colombo Telegraph that;“I think as a monk that the social/political problems that we are facing in our country has to be solved amicably through dialogues which we have repeatedly failed from the independence. Now we are again on the eve of another round of violence. I fear any time a ‘black July’ will repeat and this time it is against Muslims”

The failure on the part of the government to contain these fascist elements, suppose to have been trained by Israel’s intelligence agent Mossad known for killing Muslims worldwide and funded by Israel , Norway and America to carry out their global agenda against Islam and Muslim, had sent shivers into the spine of the island’s peaceful Muslim community.

Under such circumstance the island’s Muslim community naturally expects their representatives in the parliament to raise their problem .However they have turned blind eye. They fear that by raising the life and death issue of the Muslim community they would antagonize the power that be and would jeopardize their positions and perks.
So between the community’s interest and their position they opt for the latter. Some even go to the extent of saying that they all have skeletons in their cupboards and thus prefer not to antagonize the government by speaking against these BBS racist elements.

I wish to make a statement on a most grave issue of national concern, relating to the safety, security and wellbeing of Muslims of this island. The Muslims have been historical inhabitants of this island, and have contributed immensely to its development for many centuries. They have their own unique customs and traditions; food and dress; and are devout adherents of a very great religion. As the cultural benefactors of the Islamic Golden Age which spanned the 8th to the 13th centuries, the Muslims of Sri Lanka have scaled the heights of the whole range of human endeavor – from art and music, to medicine and law, and science, enterprise, academics and so on.
Today however, the purveyors of hate are unleashing a bitter and spiteful campaign against the Muslims. I do not need to recount the many acts of mob violence that have taken place in the last few months. Muslim women who choose to wear conservative religious dress have been molested and abused by strangers in broad daylight.
Today Muslims live in fear; anxious and hurt by the invective surrounding them. As fellow minorities, the Tamil people feel the pain, the insecurity, the fear and the anxiety of our Muslim brothers and sisters. The relationship between the Tamils and Muslims has always been close – sometimes strained and to our perpetual shame, though very rarely, even violent and cruel – but always close. Our people are too closely intertwined for one to think that it can survive the fate of the other. We are connected to each other just as we are connected to the Sinhalese, the Malays and the Burghers; but the bonds of a common language and home cannot be broken easily. And so, when our Muslim brothers and sisters are harmed on the street; or attacked by mobs; or have their Mosques vandalized; we cannot unconcerned spectators.

Mr. Speaker, as Leader of the Tamil National Alliance, I demand that the violence against the Muslims cease now. I demand an end to the repulsive hate speech that we hear every day. I demand an end to the collusion of the state in this campaign of hate. We are conscious that the vast majority of the Sinhalese Buddhist people do not condone such actions and that they would very much wish to live in peace and harmony paying due respect to the rights of other Peoples. As victims of the worst atrocities, we the Tamils have demanded that the country and the world heed our call for accountability, justice and the guarantee of non-recurrence.

We wish to emphasize that the enforcement of law and order, and ensuring the safety and security of all Peoples including Muslims is primarily the responsibility of the State. Recent events have shown that the State has not discharged this responsibility in a manner beyond reproach.
We therefore call upon the government to refrain from acts of partisanship and discharge its constitutional duty be ensuring that equal protection of the law be afforded to all Peoples in this country including the Muslim People.

Sri Lanka Muslim Congress which came with the slogan of Islam, Shariah and unity, but divided into more than half a dozen when they were individually and collectively lured to join the government abandoned the very community they came to protect and promote. By their silence they are helping racists to attack the island’s impoverished and helpless Muslim community.

However displaying absolute treachery a Muslim parliamentarian who, perhaps living in another planet, had stated that the island’s Muslims are living in peace. Another Muslim parliamentarian, according to many in the Muslim community, was used to threaten Fashion Bug owner to withdraw his case against the mob who, including monks, attacked his store at Pepiliyana in the presence of police and caused millions of rupees worth of damage besides mental agony. In doing so these parliamentarians not only betray their community but also encourage racist elements to continue their hate campaign against Muslims.
The lowest level to which the Muslim parliamentarians could descend to sell their community to safeguard their position was explained in an article by well known columnist Dharisha Bastians in an article on Dafther Jailani April 10 2013;

Last Friday 5 April 2013 while the Pakistan Foreign Secretary, Jalil Abbas Jilani was in Colombo for bilateral consultations, the Pakistani mission in Colombo arranged a special meeting for the official with key Muslim politicians and the community’s representatives to discuss the recent developments. Interestingly, the meeting was scheduled prior to Secretary Jailani’s meeting with Defence Secretary Gotabhaya Rajapaksa.

For several hours at the residence of Western Province Governor Alawi Moulana, Muslim representatives, including Justice Minister Rauff Hakeem and A.H.M. Azwer and other non-politicians briefed the Pakistani Foreign Secretary about the ground situation relating to Muslims in Sri Lanka. Minister Hakeem, who spoke first chose to be measured in his statements, but nonetheless highlighted the threats that Muslims were facing in the country due to the meteoric rise of Sinhala Buddhist hardline groups.

Soon afterwards, Azwer who rose to speak rubbished the claims that Muslims were facing harassment. He said all communities were living peacefully in the country and said the incidents being reported were merely rumors.
The visiting Pakistani official was briefed on the various incidents of Muslim harassment being reported, including the damage to the Korans in several mosques, the man-handling and verbal abuse directed at Muslim women wearing Hijab and campaigns calling on the Sinhalese to refrain from renting office or house space to Muslims. While appreciating the role Pakistan played in getting Sri Lanka the support of several Islamic nations at the UNHRC in Geneva last month, the Muslim representatives urged the visiting official that Islamabad also had a responsibility to remind the Government of Sri Lanka that the rights of the Muslim community in Sri Lanka must be protected.

President of the Sri Lanka-Pakistan Friendship Association Ifthikhar Aziz who commented on the situation at the meeting warned that Muslims were facing a grave situation in the country but had shown tremendous patience and conducted themselves as a mature minority in the face of threats from hard-line groups. Aziz warned however that it takes only one fool to react to the situation and make it spiral out of control. He explained that while the LTTE only represented the views of a small percentage of Tamils in their separatist claim, in the case of the Muslims, because it involved damaging insults to their religion, the entire community would get involved if matters reached boiling point and this situation had to be avoided at all costs.

Betrayed
By Saturday morning, President Rajapaksa had gotten wind of the meeting. He was aware of all those who had spoken at the meeting with the Pakistani Foreign Secretary and all the information that had been relayed. A fuming President questioned Governor Moulana as to why police entries had not been made regarding these incidents against Muslims. He said the National Intelligence Bureau was keen to investigate the issue. Although it was not certain how the information had been relayed to the President so swiftly, many members present believe that MP Azwer, who had stoically maintained there was no anti-Muslim campaign in the country, may have played Judas and repeated the proceedings of the meeting verbatim, thus concluded Dharisha Bastians