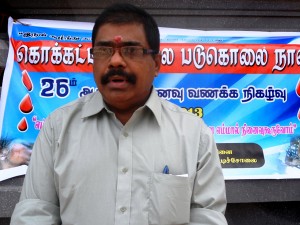 TNA Parliamentarian P. Aryanenthiran has been questioned by the Terrorist Investigations Department (TID) over some alleged conversations he has had with political prisoners.
Aryanenthiran had been quizzed for nearly 1 ½ hours by the TID after he was summoned to record a statement.
He was asked about his conversations with Tamil political prisoners over the telephone in the recent past.

He also said that when he receives a missed call he tends to return the call not knowing who it is.
September 4, 2013  (Colombo Gazette)