TNA in back to back meetings with Int community emphasises the need ‌for a political solution. 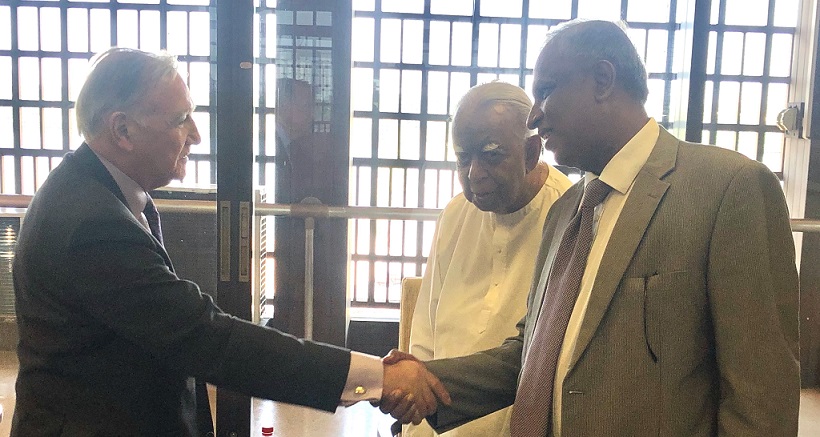 Just two days after the meeting with  Rep. Ami Bera assured that the United States in Colombo, TNA has met with visiting United Kingdom Parliament Member, the Rt. Hon the Lord Malcolm Bruce PC and emphasised that need for finding a political solution to the ethnic conflict of the country. In response Lord Malcolm Bruce  has stated that the rational reasonable and peaceful approach in these matters is commendable, we will work with the Sri Lankan government to arrive at a reasonable solution to this longstanding issue.

The statement issued by the TNA fellows:

Appreciating the visit of Hon Member of Parliament Mr. Sampanthan briefed the history of Tamil people’s struggles ever since independence. Mr. Sampanthan highlighted the fact that the Tamil People did not demand separation until the state patronaged land grabbing and illegal settlement took place after independence. Nevertheless, after the introduction of the 13th Amendment to the Constitution the call for a separate state was abandoned said Mr. Sampanthan. Though the 13th amendment was an important step in power-sharing arrangements it was not adequate to address a meaningful devolution of power said Mr. Sampanthan. Ever since then every successive Government worked on to improve. There were several drafts, yet nothing materialized said Mr. Sampanthan.

Speaking at the meeting Jaffna District Parliamentarian M.A. Sumanthiran pointed out power-sharing arrangement is the only way to address majoritarianism ruling. Devolution of powers in governance not merely addresses the issues of Tamil people but it will also address all other issues said Mr. Sumanthiran. In response to a question concerning the attitude of this government, Mr. Sumanthiran brought to the notice of Honorable member that even this government has promised a new Constitution, therefore, the issue of finding a lasting political solution must be addressed. Further, he pointed out that the Tamil people have constantly voted for a power-sharing arrangement within a united undivided country and that democratic verdict must be upheld by the rulers.

Lack of economic growth, poverty, the issues faced by the female-headed households and unemployment are some of the key issues faced by the people in the North and East said Mr. Sumanthiran. He also emphasized the fact the due to the instability in the country not many investors are coming forward to invest in those areas. If we could arrive at a political solution we could attract more investment especially from the Sri Lankan diaspora community said Mr. Sumanthiran.

We want the entire country to prosper not just North and the east said Mr. Sampanthan, the power-sharing arrangement will apply to all the other provinces and not just contained for areas where the Tamil people are the majority. We want people to exercise power to the matters that are relevant to them added Mr. Sampanthan.

Rt Honorable Member appreciated the efforts put in by Mr. Sampanthan in finding a solution to the national question he further said, the position you have taken is extremely constructive and your demands are fair. Your rational reasonable and peaceful approach in these matters is commendable, we will work with the Sri Lankan government to arrive at a reasonable solution to this longstanding issue said Honorable Member of Parliament.