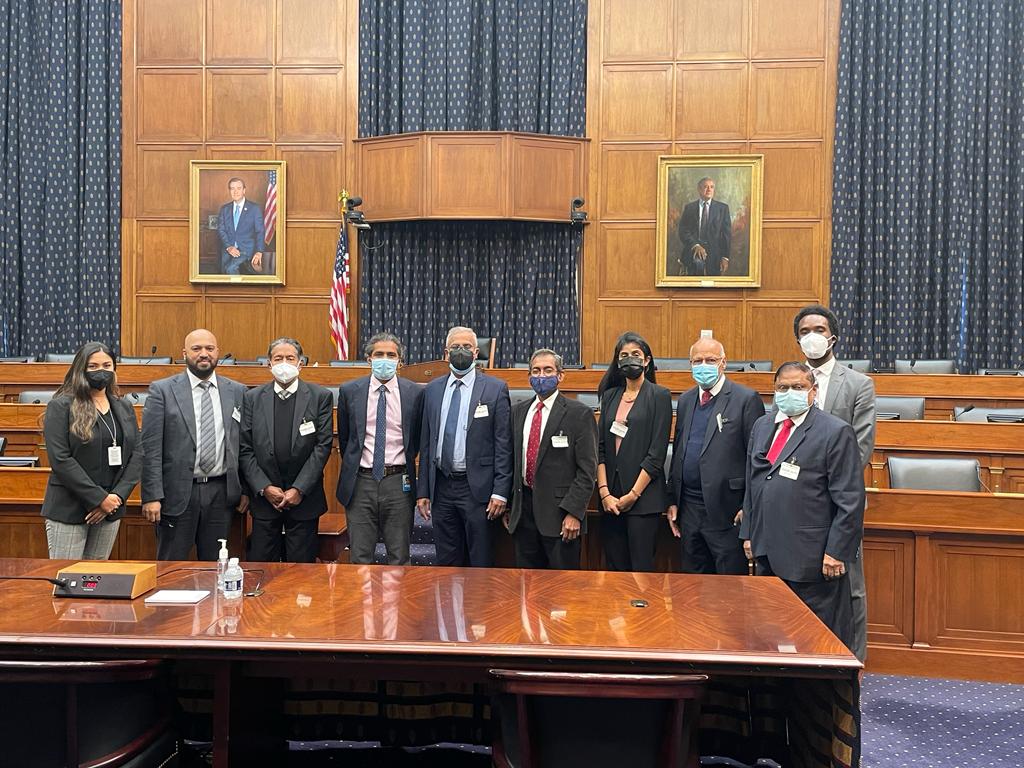 Tamil National Alliance (TNA) delegation together with Global Tamil Forum (GTF) representatives (the “Delegation”), had many significant engagements in the US between November 15 – 22, articulating Tamil people’s concerns to key US Government policymakers and Members of the US Congress. We are pleased with our discussions and remain encouraged by their concerns and responses.

The delegation also met with senior staff members of the House Foreign Affairs Committee and the Senate Foreign Relations Committee; the Assistant Administrator of the USAID; Legislators from the United States Congress; and former US Ambassadors to Sri Lanka and Assistant Secretaries for the region.

The Delegation expressed its deep appreciation for the US leadership at the United Nations Human Rights Council (“UNHRC”) in promoting accountability, reconciliation, and human rights in Sri Lanka. While calling for continued leadership of the United States Government (USG) at the UNHRC and in light of Sri Lanka’s failure to make satisfactory progress on implementing UNHRC Resolution 46/1, USG was encouraged to consider a multifaceted approach in addressing the many challenges in Sri Lanka.

The particular focus of the current engagement was to call for a proactive USG role in promoting a holistic approach to reconciliation, which would include addressing the root cause of conflict and human rights violations, the denial of political rights to the Tamil people. The Delegation emphasised that addressing the legitimate aspirations of the Tamil people for equality, justice, peace, dignity, and meaningful power devolution is critical in guaranteeing non-recurrence.

The present conditions in Sri Lanka and its trajectory towards authoritarianism and militarised governance; further marginalisation of Tamil, Muslim, Hindu, and Christian communities; the serious economic difficulties faced by the people; and the vulnerability of the country for external manipulations – were also highlighted to the US.

The challenges faced by the Tamil community on a daily basis to protect their land and preserve their identity in the Tamil majority Northern and Eastern Provinces against rampant militarisation and state sponsored initiatives aimed at altering regional demography was discussed. Details of some of the recent land appropriation measures by the government of Sri Lanka were presented and the urgency to counter such measures with international assistance was sought.

The opportunities and challenges for changing the present conditions in Sri Lanka was highlighted and the transformative role that the USG could play, in alignment with India at this critical juncture was underscored. Preventing further deterioration of the governance and economic ills of the country and fostering equality and reconciliation among all its communities was emphasized and called for.

GTF, from the time of its inception in 2009, has played a constructive role in promoting peace, justice, equality, and reconciliation in Sri Lanka. While promoting accountability, including at the UNHRC, GTF has maintained high level engagements with all stakeholders in Sri Lanka, including politicians, civil society activists and media personnel, with the firm conviction that a durable political solution in Sri Lanka ultimately support of all of Sri Lanka’s communities. GTF has also been involved in targeted activities related to rehabilitation, medical emergencies and development initiatives across many regions and communities in Sri Lanka.

GTF, in partnership with all stakeholders in Sri Lanka, varied interests and perspectives in the Diaspora and the international community, remains committed to playing a constructive role in advocating primarily, for the betterment of the Tamil people and others.