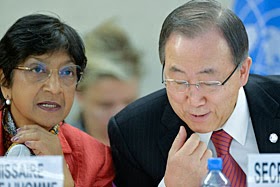 Opening Statement by Ms. Navi Pillay, United Nations High Commissioner for Human Rights
(to be delivered on 6 March 2014)
Impunity and the rule of lawStrengthening the administration of justice remains a priority for OHCHR, with focuses on such fundamental issues as the independence of the judiciary and the protection of the rights of persons deprived of their liberty. We continue to support human rights mechanisms that specifically address these issues. My Office has also continued its advocacy in favour of a moratorium on the death penalty, with the goal of its complete abolition.  I am heartened to note that the list of countries which have abolished this cruel measure, or adopted a moratorium, is growing constantly.

OHCHR also continues to support a robust and comprehensive approach to strengthen accountability and to fight impunity for gross human rights violations. In 2013 we accompanied national efforts in drafting transitional justice laws in Libya, Tunisia and Yemen, among others. We supported inclusive and participatory approaches to transitional justice processes in Côte d’Ivoire, Tunisia and Guinea. I welcome the recent judgement of the Supreme Court of Nepal, which ruled out amnesty provisions and directed the Government to revise legislation for transitional justice mechanisms that comply with international standards.

Nearly five years on from the end of the conflict in Sri Lanka, I regret that the Government has failed to satisfy the Council’s call for a credible and independent investigation into allegations of serious human rights violations. I therefore recommend that the time has come for the Council to establish its own international inquiry mechanism which I believe can play a positive role where domestic mechanisms have failed.

I have also repeatedly called for an immediate, comprehensive and independent investigation into all human rights violations that have taken place in recent months in Ukraine, including killings, disappearances, arbitrary detentions, torture and ill-treatment. I strongly believe that respect for human rights norms and standards, building a society that is inclusive of the rights of all, is key to finding a peaceful and durable solution to the current crisis.

Victims of human rights abuses in war, armed conflict and foreign occupation must be assisted to achieve justice and recover their integrity. In 2013, together with UN-Women, we finalized a guidance note on reparations for victims of sexual violence. We also launched a study on reparations for survivors of sexual violence in Kosovo.
Civilians are increasingly targets during armed conflict, and protecting them is a vital part of peacekeeping missions. This requires timely and well-resourced human rights monitoring, advocacy and reporting. My Office has cooperated with DPKO and DPA to develop a joint policy that seeks to ensure that that all parts of the mission will work better together to respond to the risk of human rights violations, including in situations of imminent physical violence against civilians.  We have also advised on preventive deployments and contingency plans, and the shelter and escort of civilians and have worked with local communities to provide alerts on risks of human rights violations.
Protecting human rights in the context of counter-terrorism has continued to be problematic, as with the failure to close the United States’ Guantanamo Bay detention facility. In Egypt, where the Government is launching what it describes as a counter terrorism campaign, it is important that human rights are respected; in particular, protection from arbitrary detention, fair trial, and freedom of expression and peaceful assembly.  My Office stands ready to assist.

Armed drone strikes have also raised deep concern, particularly regarding transparency, accountability and redress for victims. My Rule of Law colleagues and the Special Rapporteurs on Extrajudicial, summary and arbitrary executions, and on protection of human rights while countering terrorism, are addressing this topic.

for the full statement please : OHCHR