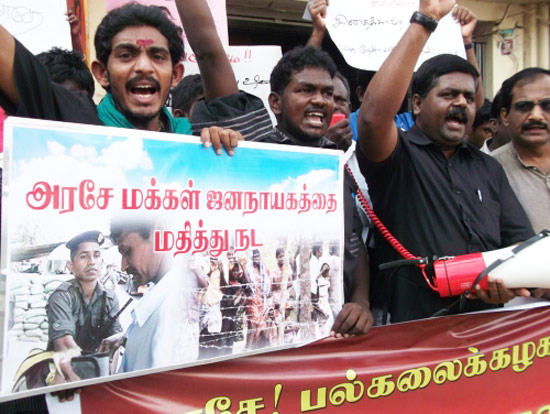 The ‘Terrorist’ Investigation Department operated by the Sri Lankan Defence Ministry is engaged in fabricating a false accusation against 13 students of the University of Jaffna and a few other students in the peninsula, informed sources close to paramilitary circles in Vavuniyaa said. The TID interrogators were working on a false accusation that ‘instructions’ and ‘money’ were provided by the Tamil diaspora in the West to observe Heroes Day in the homeland. Already, nine students of the University of Jaffna are illegally detained by TID interrogators at Vavuniyaa.
According to news sources in Jaffna, two student leaders chose to seek humanitarian protection with the SL Human Rights Commission office in Jaffna on Friday. Two more students from the ‘wanted list’ of the TID are yet to seek protection, news sources in Jaffna said.

SL Police in Jaffna has no idea of the ongoing investigations by the TID division operated from Colombo.

A Sri Lankan TID operative had handed over a ‘wanted list’ consisting 10 names to the administration of the University of Jaffna on Wednesday.

The 6 students of the Medical Faculty were handed over to the Sri Lankan ‘Terrorist’ Investigation Department (TID) by the Medical Faculty Dean, two lecturers of that faculty and the parent of one student, amid protests by the student representatives and University teachers.

On Friday, the leader of the Student Union of Jaffna University, S. Bavananthan from the Science Faculty and the leader of the Science Faculty Student Union S. Venuraj chose to seek humanitarian protection from the Sri Lankan Human Rights Commission office in Jaffna, where hundreds of Tamils had sought security between 2006 and 2009 when abductions by the SL military intelligence operated white vans were rampant in the peninsula.

Three students were already in the custody of the TID at Vavuniyaa after the SL Police and SL military intelligence arrested them after the students observed Heroes Day remembrance at the hostel of the Jaffna University on 27 November.

Two students, Solaman Sanmugam and Jenamajenth Kanagasundram, accompanied by a lawyer and lecturers of the University had presented themselves on 29 November at Koappaay Police and handed over to the TID. On 30 November two other students Tharshaananth Paramalingam and Sutharsan Kanesamoorthy, were arrested by Koappaay Police at their temporary residences and subsequently handed over to the TID. One of the students, Mr Sutharsan, of Medical Faculty was later released.

In the meantime, an 18-year-old student of Valveddith-thu’rai Chithampara College, reported missing since Wednesday, was being interrogated by the TID, according to a message conveyed to the parents of the missing youth.

The occupying SL military has stepped up the terror campaign against the students of Jaffna university as well as students of schools in Jaffna, despite the wide scale protests from the university teachers, Tamil political parties, trade unions and the civil society in the island, and despite protests in the diaspora.

23 religious leaders, 24 civil groups, media associations and women groups and more than 50 influential individuals across the island have voiced in support of the University Teachers Association of Jaffna and called on the Sri Lankan authorities to immediately release the detained students and to provide assurance in order to create a more secure and conducive environment for teaching and learning within the University that no further student arrests will be made.

During the last week, demonstrations have also taken place in 7 countries outside the island.
TN