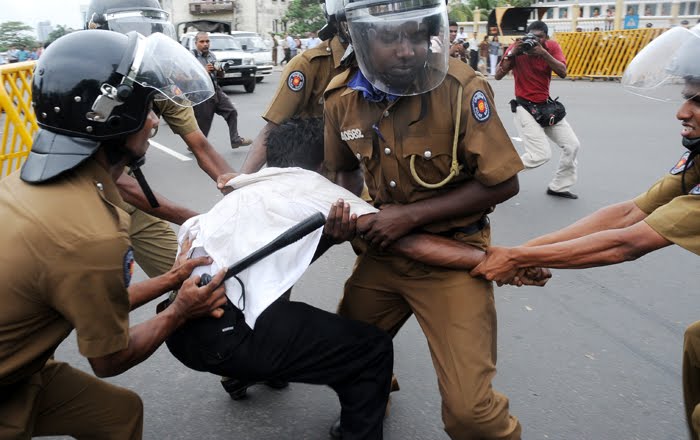 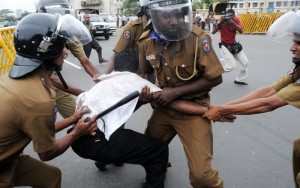 NOTEBOOK OF A NOBODY by Shanie

“Transient alas are all component things
subject are they to birth and then decay,
having gained birth to death the life-flux swings
bliss truly dawns when unrest dies away.“

– Pali stanza recited at funerals, from J B Disanayaka’s The Monk and the Peasant (1993)

Monks when they deliver a sermon at funerals quote this stanza to enable all those present to reflect on the impermanence of life. But, our political leaders and others in positions of authority seem to have no time for such reflections. They obviously think they have a permanent divine right to rule and nobody should have the audacity to challenge their actions. Woe betide the person – journalist, cartoonist, trade unionist, rights activist, legislator, judicial officer or an ordinary citizen – who dares to raise the voice of dissent. Such ‘traitors’ or ‘pawns of foreign conspirators’ will receive their just desserts. Wimal Weerawansa, who sees conspiracies under every bush, has this week told a group of public officials that the attack on Judge Manjula Tillakaratne, Secretary of the Judicial Service Commission, was a result of a political conspiracy. “A premeditated political conspiracy is being hatched in many countries to tarnish the image of the government in the eyes of the people. This type of situation is prevalent in countries governed by patriotic and liberal minded rulers. Certain NGOs, Western missions and separatist forces are drafting the agendas of these conspiracies. These elements are behind the FUTA strike too”, this “true patriot” has said.

In another ceremony this week, 23 education officials, who included seven woman Principals of leading girls’ schools, were commissioned as Brevet Colonels by Secretary, Defence at the Ministry of Defence office. The Ministry of Defence website states that they were “commissioned as Brevet Colonels in recognition of the services rendered by them towards the betterment of the National Cadet Corp. The newly commissioned officers comprised of an Additional Secretary to the Ministry of Education, the Commissioner General of Educational Publications and 21 Principals of leading schools around the country…. Speaking at the event Secretary Defence expressed confidence that the new officers will enhance their knowledge of the military service and work towards the betterment of the country.”

Since there is little transparency in the involvement of the defence establishment in the sphere of education, we are not sure the reason for commissioning these school principals as military officers. Certainly, the woman Principals could not have contributed to the betterment of the National Cadet Corp. It seems more likely that the manner in which new university entrants were given what was euphemistically called ‘leadership training programmes’ in military camps, school students are also going to be subject to this. When leadership training was introduced for university entrants, academics and educationist protested saying that any such training and the formulation of the curriculum fo it must only be prepared and sanctioned by the statutory bodies in the universities but also that it must be conducted in universities and not in military camps. But to no avail. The UGC and the Vice Chancellors tamely accepted the programme of the Ministries of Defence and Higher Education with no regard to the provisions of the Universities Act.

It seems we are going to see a repeat of that with regard to our secondary school students, starting with the 21 schools where the Colonel Principals are heads. Recently Friday Forum, a group of concerned citizens issued a statement under the signatures of Jayantha Dhanapala, a highly respected international civil servant, and Prof Savitri Goonesekere, a former Vice Chancellor of the University of Colombo. They concluded their statement by stating that the Constitution of Sri Lanka requires a commitment to democratic and not military governance. Earlier in the statement they referred to the leadership training programme introduced in the universities and stated: “We raised our concerns in regard to this programme and appreciate the concern to provide a “life skills” programme for students with a component of physical training and social skills, given the varying facilities available to students in secondary schools. However a military orientation in a leadership programme is in conflict with the environment of teaching and learning in universities. Such institution must create an ethos of intellectual curiosity and freedom rather than military regimentation. We therefore repeat our request that the programme is conducted by universities as part of their orientation course for new students, on University Campuses. These courses can be held as they often are, before senior students commence their study programmes. Alternatively the course could be conducted district wise in secondary schools with the best facilities for conducting an orientation programme that focuses on physical training and life skills, but without the involvement of the military.”

The increasing involvement of the military in many fields is a trend that has to be nipped in the bud. Our Constitution may require democratic governance and not military governance; but what is of greater importance is for public vigilance to preserve our democratic institutions. The judiciary, the media, civil society and our religious leaders need to be in the forefront of this struggle. Our legislators, on both sides of the House, have dismally failed to protect the sovereignty of the people. Time and again, they have shown that they can be bought for a few pieces of silver. Even persons whom the public thought had some principles and integrity in them have proved an utter disappointment. They wax eloquent on the undemocratic nature of the Eighteenth amendment and the Divineguma Bill, against the verbal and physical assaults on the judiciary, the media, the dissidents among civil society. but are as meek as lambs inside the Cabinet Room and Parliament. Is it any wonder that such people are held in contempt bothwithin the government and without, by supporters and opponents alike.

The political opposition in the country is drifting rudderlessly. Its leaders seem senseless to public opinion and seem unwilling to acknowledge ground realities. This is perhaps the reason why the movement initiated by a leading Buddhist monk, the Ven Maduluwawe Sobitha, is gathering some momentum. It is attracting a wide and disparate group of supporters. He has drawn up a 10-point plan but says it is subject to refinement in consultation with other groups of civil society and all political parties, which hopefully will include parties both in government and opposition. That way, his ten-point plan should become more inclusive, focusing on the political, economic social and cultural needs of all the people of this country. The primary need at this juncture is to restore adherence to the rule of law, to create a respect for the country’s democratic institutions and to address the national issues of economic and social deprivation of the poor and marginalized in society and human rights of all.

The Venerable Sobitha’s movement is not yet a political force but obviously has the potential to become one. Already, many political figures in the opposition have publicly joined forces with the prelate. It is also rumoured that some leading political figures from the SLFP are sympathetic to his cause. Surprisingly, even some prominent leftists have been associated with drawing up his ten-point plan. If and when the Venerable monk’s movement becomes a political force, it remains to be seen if the prelate can keep his disparate group together. He has said that his is a short-term plan is mainly to do away with the Executive Presidency of the 1978 Constitution, which many acknowledge is the root of many of our problems. If the movement keeps gathering momentum, interesting times are ahead.

Police, Law and Order
Until that happens, we need to keep urging the government to bring about law and order in this country. There are daily reports of physical or sexual violence and murders being committed across the country to settle some minor scores. The cowardly attack on the Secretary of the Judicial Service Commission (for which, as we indicated last week, President Mahinda Rajapakse has to take responsibility by his irresponsible statements) was only a high-profile happening of a daily occurrence.

The Lessons Learnt and Reconciliation Commission headed by former Attorney General C R de Silva had this to say in their report: “Many persons who made representations before the Commission stated that a large number of persons having political patronage had committed offences, but the long arm of the law had not reached them because of the political pressure exerted on law enforcement authorities. Along with an independent Judiciary and a transparent legal process a strict adherence to the Rule of Law is a sine qua non for peace and stability….The Commission emphasizes that all allegations should be investigated and wrongdoers prosecuted and punished irrespective of their political links, so as to inspire confidence among the people in the administration of justice.

The Police Department is a civilian institution which is entrusted with the maintenance of law and order. Therefore, it is desirable that the Police Department be de-linked from the institutions dealing with the armed forces which are responsible for the security of the State. The Commission is of the view that an independent permanent Police Commission is a pre-requisite to guarantee the effective functioning of the Police and to generate public confidence. Such a Commission should be empowered to monitor the performance of the Police Service and ensure that all Police officers act independently and maintain a high degree of professional conduct.”

The government, which is publicly and internationally committed to the implementation of the LLRC recommendations will do well to implement this recommendation immediately and restore public confidence in its willingness and ability to uphold the rule of law.
IS