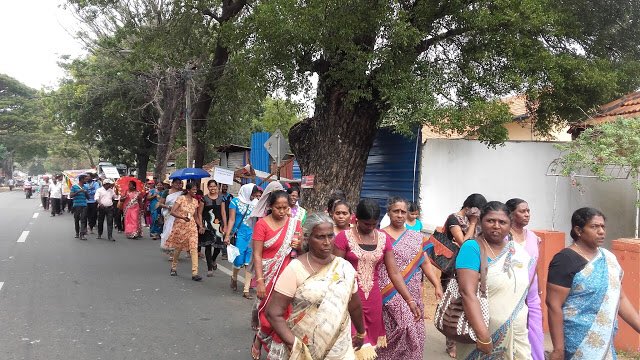 ‘Our home and country are indebted, what is the solution?; ‘Stop loans, give employment’ and ‘Strengthen people’s organisations’, read the banners held by participants, who marched from the iconic Veerasingham Hall — named after a former MP who pioneered the northern cooperative movement — to the office of the Government Agent (GA corresponds to the district collector in India).

Participants included members and employees of cooperative societies across the Northern Province and thousands of women, who are among the worst-affected by the high-interest, unregulated loans. After the civil war ended in 2009, a host of microfinance companies made credit easily available to those struggling to rebuild their lives.

In its petition to the GA on Tuesday, the Jaffna District Co-operative Council sought a ban on unethical microfinance companies, an interest cap on “predatory loan schemes”, a two-year moratorium and the expansion of low-interest government credit schemes.

Speaking to The Hindu, Kanthiah Mahadevan, president of a Jaffna-based credit cooperative society and an organiser of Tuesday’s protest, said while many families in Jaffna receive financial support from a member earning abroad, it is the economically most vulnerable who are aggressively targeted by the companies. The interest rate is 28% on paper, but the actual interest paid adds up to 70%, he said. “The government must channel funds to the cooperative societies so we can lend at a reasonable rate of 10-12%.”

With no option of repaying the high-interest loans, many women take multiple loans to survive. “Collecting agents often harass them at their doorsteps, pushing many to the brink of suicide,” said Sarojini Pathmanabhan, secretary of the Northern Province Federation of Thrift and Credit Cooperative Societies.

Amid growing calls for government intervention to address the problem, Sri Lanka’s Central Bank said in October last year that it was considering measures, including a moratorium and an interest rate cap. Asked about the progress made, the apex bank’s Governor Indrajit Coomaraswamy said an awareness campaign was being undertaken. A six-month moratorium came into effect a couple of months ago, but more people needed to be made aware of the option, he said. “We have not ruled out a cap on interest rate, but we would prefer it if the banks are responsive to the situation and take decisions to self-regulate,” he told The Hindu.

The central government has made a budgetary allocation of LKR 500 million for debt relief in 2018. “The allocation is welcome, but if the government does not take immediate regulatory measures, the development of the northern economy will be at stake,” warned Jaffna-based economist Ahilan Kadirgamar.