This process has totally nullified 19A and it is unconstitutional.- J.C. Weliamuna 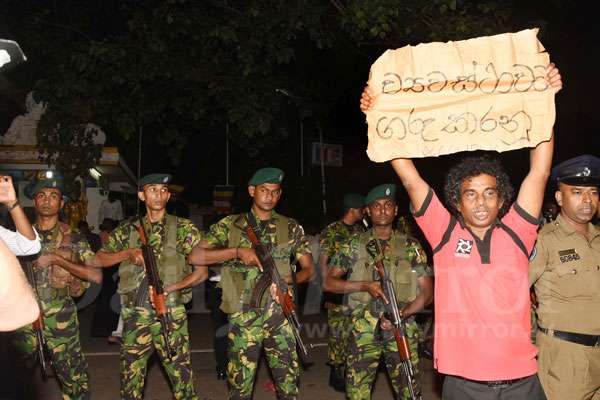 Politics has always been a messy game. It got even messier over the past few days. At a time when many debates, arguments and justifications are being brought up, one certainly wouldn’t be able to distinguish between what is right and what is wrong. When many were looking forward to November 14, President Maithripala Sirisena dissolved Parliament last Friday -another trump card out of many as he said. A majority of those in the legal fraternity deem this move unconstitutional. “Imagine a situation where in Parliament, the President and Mahinda Rajapaksa are unable to show a majority; it can then lead to what is known as a Constitutional deadlock,” says J.C. Weliamuna, President’s Counsel specialised in Constitutional and human rights law, in an interview with Daily mirror . Excerpts:

Q. There have been several arguments over what was right and wrong in the sudden turn of events since October 26. What are your thoughts on this?

There are multiple issues here. First is the removal of an existing Prime Minister and appointment of a new one. There are a lot of arguments to that move. Then surfaces the question whether prorogation is lawful or not — leading up to a potential dissolution of Parliament. Let’s take a look at the provisions; the basic fact regarding a Constitution is that it is not interpreted like normal laws. One cannot tamper with it and we need to find answers within the Constitutional framework. In the Constitution, unlike other laws, there is no provision to say that either Sinhala or Tamil clauses prevail. They have to look at the intention of the Parliament. The Constitution is a fundamental document that sets limits to power, which is why it is a counter-majoritarian document. If we say the Parliament has powers, it sets limits to Parliament. Otherwise, the Parliament can pass anything. This applies to the President as well. He has his powers and you need to look at the limitations.

Q. According to 19A, where does the legality lie in the unfolding of such events?

Many say the President was vested with enormous powers through the Constitution prior to the introduction of 19A. Article 47 says the President has the authority to remove the premier and Cabinet ministers. 19A was intended to shift away executive powers. Therefore, any interpretation will look at the amendment first. There is no provision and since Article 47 was altered, the President is now unable to change the PM. They also refer to Article 48 (1) in Sinhala which says the PM will be removed, but it doesn’t say that the PM will be removed by the President. Even then, there is a procedure to remove the PM and that is not by the President because his powers are limited. The only instance where a PM can be removed — which is termed an enabling provision — is through a no-confidence motion in Parliament. If not, it has to be the court upon him ceasing to be a Member of Parliament (MP) through an election petition. Under the Constitution and according to Standing Orders, there is one more person who cannot be removed. That is the Speaker. Furthermore, a no-confidence motion cannot be brought against the Speaker because we have gone towards Parliamentary traditions, moving away from Presidential systems.

Q. Some claim that since the SLFP left the Cabinet, the PM ceased to exist. Is that true?

There has to be 30 members in the Cabinet with the President and if there is a national government, the numbers may increase. When the SLFP withdrew from the national government, the Cabinet ceased to exist and the Parliament has to be dissolved. Once again, this is similar, because the Constitution states how a Cabinet is dissolved. This is when the PM resigns and even with the dissolution of Parliament, the Cabinet may continue to function. The provision caters to the party that musters a majority to accommodate as many people in the Cabinet. In fact, it is quite an unhealthy provision. It doesn’t get members together to run the country. The Cabinet will be expanded so that people won’t jump here and there and they will be accommodated. It is the party which gets the highest number that can form a national government.

Presently, it is the UNP. The SLFP cannot form a national government. In order to form a national government, there has to be a resolution passed in Parliament. Only then can the President appoint more than 30 members. When you increase the count to more than 30, you don’t have to replace the PM. It is the same equation when you reduce the count. The national government concept is only for the size of the Cabinet. That has nothing to do with the President’s power to remove the PM. They are totally independent. The President can appoint a PM only if there is a vacancy and such a vacancy will occur only in terms of the provisions given or after an election. Under Article 47, the President can appoint a PM when there’s a vacancy. During such an instance, he can form an opinion on who commands the majority. This happens in two ways in Commonwealth countries — you either consult the parties and the party that garners the highest number will appoint whoever it considers to the post. If the decision is challenged, a ‘Floor Test’ will be held to show a majority and then you are appointed. Once appointed, the executive ceases to have any authority for interference and this applies to any executive anywhere in the world. This is the Constitutional change envisaged in 19A. If you want to have Parliamentary traditions, this is how it should happen. Otherwise, we are going back to the epoch pre-19A.

Q. Can this process be reversed?

This process has totally nullified 19A and it is unconstitutional. It is now difficult to redo it and even if you show a majority, this unconstitutional step will create a historic precedence and ultimately affect the populace. Imagine a situation where in Parliament, the President and Mahinda Rajapaksa are unable to show a majority; it can then lead to what is known as a Constitutional deadlock. Such deadlocks will be resolved militarily or by bloodshed. In order to get over that, the government will have to resort to many other unconstitutional steps. If the President wants to respect the people’s mandate and the Constitution, he has to give in.

Article 99 (13) has been over-interpreted by the Supreme Court in many rulings. I cannot say if it is right or wrong, but we ended up in a situation where MPs can crossover to any side. If you want to jump into a party that is in power, you can strengthen their hands. It’s the party’s decision that is challenged

Q.Does it leave room for dissolution of Parliament?

Q. What exactly are the President’s powers?

Article 33 lists out the President’s powers. These include presiding ceremonies and summoning, proroguing or dissolving Parliament. Although he has a general power when there are specific limitations, you can’t say that one part is valid and other part is not. Previously, there were decisions on 19A in the Supreme Court, but all of them were nullified following 19A. The President says he cannot work with the PM. This argument isn’t valid in the Constitution because the President and Parliament are direct appointments of the people. One person appointed directly by the people of the country cannot say he is unable to work with another elected in the same manner. They must cooperate and consolidate the Constitution rather than breaking it. If the President says he cannot work with X, Y or Z, it then means he is not willing to respect the Constitution. Therefore, he’s creating an undemocratic precedence. The general public shouldn’t be a casualty of personal problems between the President and the PM, if any. But now look at the socio-economic cost and international pressure. There is an unprecedented brain drain situation. They must keep their egos aside and work together.

Q. But he prorogued Parliament immediately after the new PM was appointed.

Prorogation is traditionally with the Queen. Nobody has interpreted it except in Parliamentary traditions. Even in England, prorogation comes with the Speaker requesting the executive to do so. This is because there’s a separation of powers. The Parliament has its powers and the President cannot ask them not to work. Traditionally, in other prorogations, they inform the Speaker and in this instance the budget was supposed to commence and now coming to think of it the national budget has become less important today. According to traditions, it says that the Speaker can reconvene the majority of Parliament. During CBK’s regime, she gave a lengthy order to prorogue Parliament, but the then Speaker Joseph Michael Perera said he would continue proceedings as the order was an abuse of power.

Q. Crossovers for staggering inducements have become a commonplace once again. This also raises a question about transparency. Why do they impose a black patch on the entire political culture?

Article 99 (13) has been over-interpreted by the Supreme Court in many rulings. I cannot say if it is right or wrong, but we ended up in a situation where MPs can crossover to any side. If you want to jump into a party that is in power, you can strengthen their hands. It’s the party’s decision that is challenged. Parties strike deals so that decisions will not be successful. Evidence of bribing and handing over ministerial portfolios is surfacing one by one. It is in question whether an outside source is funding such interests or if it is own money that keeps falling into the wrong hands. However, there seems to be an illicit financial flow from corrupt elements. These actions need to be investigated. All MPs concerned are virtually selling our right to franchise. This debate was tabled with 19A and there was a debate to drop crossovers — we wanted to have one provision where if you crossover you cease to be an MP. But several SLFP MPs opposed to it during the 100-day programme and eventually blocked it.

Q. People are taking to the street to protect their democratic rights. Where do we, the general public, stand in this dilemma?

People are victims of this vicious cycle. Unfortunately, they are taking party lines. There’s another group of people that find it difficult to survive without ministerial portfolios. Several others are ready to abuse power. The problem is actually with the people. If this continues, don’t be surprised if people claim to not have a future in this country. We wanted to establish the rule of law. We saw how Shirani Bandaranayake was impeached and we have seen how constitutional processes were abused. They will take a little time to consolidate and will start from where they stopped.