‘This is the land of the Sinhalese. If you accept that you can stay, if not, you can go!’ 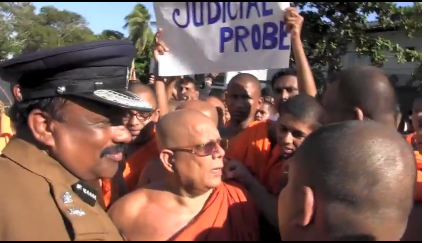 by SLB
How maitri (compassion) and ahimsa (non-violence) ended in a shower of stones!

‘My teacher is the Buddha. His teaching is about ahimsa, non-violence. Our actions are also based on that doctrine of ahimsa. As a country in which peace-loving people live, we do not like bloodshed. We do not like transactions that are carried out using arms.’

This is how the Venerable Galabodaattey Gnaneswara began his speech at the rally organized yesterday (October 4) at the Town Hall grounds in Colombo by an organization calling itself the Bodu Bala Sena (Buddhist Army) to protest against barbaric attacks on a Buddhist shrine and on some communities in Bangladesh. Repeatedly saying that there no was no greater weapon than non-violence, the Ven. Gnaneswara demonstrated his non-violent protest together with hundreds of other Buddhist monks who were gathered there through a satygraha and a maitri bhavana (meditation). Subsequently, the group of monks set out to walk to the Bangladeshi High Commission to hand over a petition to the High Commissioner. The ‘real’ non-violence of the Bodu Bala Sena emerged only when they were actually at the Bangladeshi High Commission.

‘No matter which religion or race you may belong to, everyone has to understand that this is a country of the Sinhalese. If you accept this culture you can live here peacefully. Anyone who cannot, they should leave.’
As the non-violent stance and the compassion (maitri) displayed by the Ven. Gnaneswara began to evaporate in front of the Bangladeshi High Commission, the true features of the non-violence of the monks and members of the Bodu Bala Sena gathered there was exposed, as their manic nationalist fervor against Muslim extremism began to be expressed. The fact that both Muslim extremists and the Buddhist extremists gathered at Ward Place (the location of the Bangladeshi High Commission in Colombo) walked along the same path became very clear. This craziness ended with bottles and bricks being hurled at the Bangladeshi High Commission building. The front windows of the High Commission were damaged and the sign denoting that this was the High Commission of the Republic of Bangladesh was torn down and left lying on the ground.

In the end the Ven. Galabodattey Gnaneswara has said that this attack was the result of a very clever conspiracy by an outsider. By then, the Ven. Gnaneswara has forgotten his words of a few moments before the attack, where he had declared that this was the country of the Sinhalese and all those who did not want to accept it could leave. According to our view, what paved the way to the attacks on the Bangladeshi High Commission with bricks and bottles  was not the work of an outsider but these words uttered by the Ven. Gnaneswara himself. The non-violence of the Bodu Bala Sena thus dissipated into nationalist extremism, showing the world that Sri Lanka still lives in an era of barbarism.

Bangaldeshi Tambiya ( Derogatory term for Muslims)    come out if you can!
Thambiyo, dont kill our innocent people!
We should send Muslims back to Arab. And should not allow them to cover them in black cloths, like black ghosts! who are they!

Peace, Compassion, we don’t need them , We should get together and beat them
They are not deserved to be given requests, they should be thrown away,
Why should pardon them, they are sinners who kill sinners!
Hambaya ( another derogatory term for Muslims) be careful!