This a Buddhist Country; We Can Kill You, Buddhist Monk Tells a Tamil Family in Colombo 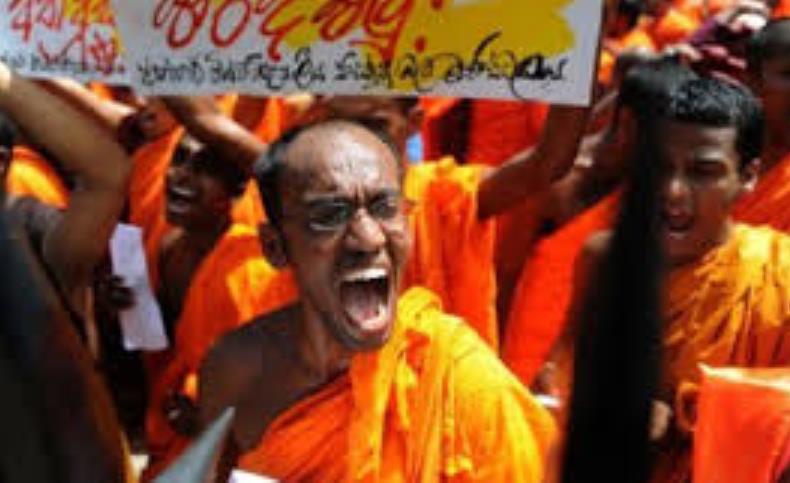 Tamil Family in Colombo Suburb Suffers Terrible Ordeal at the Hands of a “Religious Mob.
By Nila Loganathan.

I have realized, again, that this world, as usual, is a ‘heavenly’ land full of religion, religious hatred and a land of people at the height of their barbarism, passed on through thousands of years of religions.

This time it were Buddhist monks who opened my eyes.

We barely managed to escape with our lives yesterday. The hatred could continue today, tomorrow or even days after this has passed.We could be sliced down by hundred swords bearing people… me, my family, or the child in our house.

You will probably remember, I wrote about the Buddhist temple close to our house, the loud Pirith chanting, and the festivities that were relayed over the loudspeaker a few months ago.

When we moved to this house it was but a small Buddha statue under a Bo tree. Now it covers a much bigger extent.It is the 10th anniversary of the Pansala. And I think they have holy days in October.Yesterday was the 10th day.

On each of these 10 days they start broadcasting songs of Nanda Malini at exactly 3pm. The same song would be broadcast, on a loop, till 6pm. Young students of the Sunday schools would broadcast their radio programs in between. They would usually broadcast religious doctrines, religious songs and pious thoughts.

This does not happen only during the anniversary celebrations. It happened everyday beginning from 6pm. But this time it commenced at 3pm and ends around 10pm.

I’ve had migraine for a while now. Only a person with migraine can ever say how, when or why one could get a migraine. Nothing else could be predicted about them.

From 6pm to 10pm high decibel ‘Bana’ is broadcast and the monks also deliver their teaching.The recorded Bana is played till early morning.

The Perahera commences at 3am. Every day, the Perahara consists of lashing, drums, ghost dancing and fire torches. Then at 6 am the procession would end near our house.

I am not exaggerating here,

The teachings would explicitly and implicitly include,
1) How Buddhists are unable to maintain order and unity within Buddhism, unlike other religions.
2) How our religious teachings should be said loud and clear for others to hear.
3) How this is a Buddhist country, and how there should be nothing else other than Buddhism in Sri Lanka.

Yesterday, I went to them for the third time.

The first time, I spoke directly to the Chief monk and kindly asked him to reduce the volume. Not to stop.The second time, with obedience and humility unusual for me, I asked them at least if they could direct the loudspeakers not pointing to our house.Last night was the third time. The final day of the events.

Since 10pm we were waiting for the noise to be over, yet it remained and after 12pm it was giving us immense discomfort.I went downstairs. We went.Very quietly and very gently we asked an elderly gentleman present if we could speak to those concerned.

‘What is the problem?’

‘There is no problem. Could you reduce the volume? I have “migraine headache”.

The worshipers were quietly listening to the speaker.

I don’t know where they came from. Initially there were around 15 of them.

‘Come inside, we can talk’.

‘I did not come to argue or debate. If you could, can you please reduce the volume?’

Another 15 of them came in an instant. Suddenly, we were trapped within a circular formation.

‘I don’t intend to oppose this. But the sound levels are affecting me”.

The noise did not allow us to even talk or discuss with them.

Suddenly, several Buddhist monks, including some in maroon robes, rushed towards us. One called himself the Chief monk.

The air was filled with the stench of alcohol (an ordinary person cannot chant Bana all day without compulsory mild stimulant).

‘Umbala Para Dhemala , palayang’
circular formation was slowly closing in. It was becoming air tight. Around 200 people were now around us.

We couldn’t move an inch within the formation.

We couldn’t hear anything beyond the racist chants, screaming and the jostling.

The group reeked of alcohol stench.

The chanting was temporarily halted to deal with us.

Around 30 minutes into this physical hitting and jostling, a Sinhala- Buddhist woman from the neighborhood escorted us to her house and took us to safety.

My sister too had arrived there at this point. She was a medical doctor by profession and a general practitioner in the area.

The woman was advising us thus:

‘This is a Buddhist country. Pirith chanting cannot be stopped. You could go and live with your relatives in October. That is good for you. The only reason that there are no floods and cyclones in this area is because of the Pirith chanting at the temple. Your sister is a doctor. But do you think it’s her medicine which saves the people? Definitely not. It is the Pirith chanting and our rites that have kept the people alive.”
The lady locked us inside and went out to check the circumstances.

In around 10 minutes she came back, accompanied with other villagers, escorted us to our house so we could ‘settle’ with the chief monk.

While we were at the lady’s house around 50 of the intoxicated mob, led by the chief monk, had entered our house.

We entered our house hoping that we might get to meet someone who could talk sense among of this chaos.

We saw an enraged, drunk, aggressive 40-45 years old, worn in Maroon Monk (seeing him for the first time) expressing utter dominance in his sitting posture. The six-year-old child was weeping and the hall is filled with the drunk and other aggressive strangers.

“I’m the chief”– said the Monk and delivered the worst racist remarks of the night, repeatedly hitting on his chest.

‘We will cut them to pieces.’

I do not wish to write in detail of what happened at our house.

The police arrived. They were informed and brought in by the Monk himself.

They asked us why we had assaulted the monk!

Around 10 people came forward to attest that we had assaulted the monk and them. Those people were randomly chosen by the monk, then and there.

Everyone, including the monks, the policemen, the worshipers and us, we all knew that a concocted story was being told to the policemen.

We were quiet, said nothing in return, knowing it’s never going to be a bidirectional communication nor tolerated.

Continuing the verbal abuse, that cross-cuts several fundamental ideologies, such as “Are you a male, you let your wife to talk?”, “When others aren’t complaining, why only you? I’m sure you must be in Angoda (repeatedly said)”,the monk then demanded that we apologize in public.

The people who had gathered around us, much like the junior artists in movies, chorused that we should fall at their feet and apologize. I suggested that I will apologize for ‘events that had not occurred here’.

The mob led us into the temple.

There, around 50 monks of all ages, including an African monk and an East- Asian monk, were seated on stage.

Around 200 worshipers had silently gathered in white.

The monk started to speak,
1) These Tamil dogs have dared to question us.
2) Don’t the Sinhala people and Buddhists have no backbone that they continue to listen to these people?
3) How many of you can kill them here?
4) Can you raise your hands?
5) Even if I forgive them, will the people here forgive them? How do I know that they won’t kill, beat or cut the limbs of anyone who questions their religion? Everyone… it is in your hands.
6) I know Chandrika. I will speak with the Buddhist Sangha regarding this.
7) Can we go to Jaffna and question their religion?
8) Everything will be ok if we beat Wigneswaran.
9) Now come fall at our feet and apologize.

‘If you want an apology, I can apologize for something that did not occur. But I never fall at anyone’s feet, and I never will.’

The elderly and older monks agitated against us. The youngsters watched intently as to what we were saying.

A shorter monk then throttled my husband and indicated that he would lift him off the ground by the neck.

We were too careful not to push or even move away so that the Monk wouldn’t get hurt. If he would have slipped or even fallen by himself then we would have been destroyed by the angry mob waiting.

‘I did not touch you only because you are a woman.’ – he said to me – ‘Now, go and apologize to the crowd’.

When I tried to explain to them what had happened, I was immediately shouted down. – ‘Kata wahapang, samaawa witharai oney!’ and raised his hand – ‘Don’t explain. Just apologize. Kneel down.’

We said that we would apologize (for the sake of ending this trauma) but strictly objected the kneel-down-instruction.

At this point, some people at the temple raised their voice saying “It’s getting late and we need to get back to our rituals” – so the grip started to loosen up a bit.

We apologized explicitly for something that did not occur.

Around 300 people pushed and jostled us back home, with beatings.

The pirith chanting commenced at the same decibel levels.

‘Do you see how many of us are ready to kill you?’

‘How can you live in this great Buddhist nation?’

‘See what happens in the morning’.

I don’t have an iota of hatred towards these people. From last night, I am overwhelmed by a sensed of kindness and sympathy towards them.
They are sinners oh Lord Buddha! Grant them nirvana. Or please at least post a status about them!

Any power structures that ignore human life, humans and basic human needs will never be dismantled. Only that it will be a thousand-year struggle.

I, and I alone as a woman, was a challenge to all those religious zealots, last night. Every single family will talk about me, and discuss my rights and wrongs at least till the next anniversary celebrations.

There were children. They will think about what I did.

We’ve carried out at least 1% of that great wave of motion.

I firmly believe that just like how life evolved depending on its needs, and how humanity evolved and civilized based on its needs, these humans too will evolve and choose their correct paths based on their needs.

If anyone else chooses to harass these people, I will be the first to question that too.

I have no hate or prejudice against them. I only oppose the static ideas, such as religions and all other fundamentalism. Not humans.
The social movement to empower and educate people on this planet, so they become independent thinkers and decision makers would take many decades if not centuries.

We strongly believe that what we have done last night is yet another slight contribution to the very long streams of such movements.
– Nila
30.10.2016

– From her face book courtesy of DBS Jeyaraj