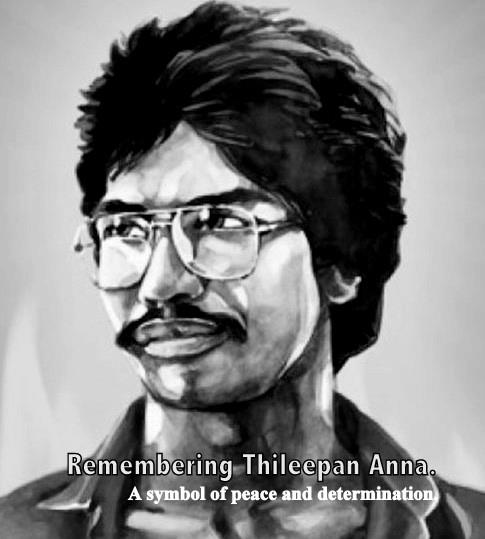 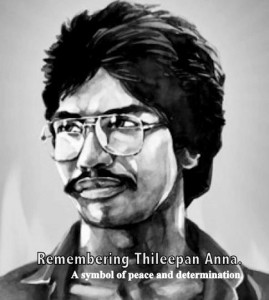 Adele Balasingham
Thileepan, the young Tiger leader of Jaffna, took the podium on the 14th September at the Nallur Kandasamy temple to commence his fast- unto-death as a protest against India’s failure to fulfill her pledges, and to mobilise the frustrated sentiments of the Tamils into a national mass upsurgence.
Thileepan’s non-violent struggle was unique and extraordinary for its commitment. Although an armed guerrilla fighter, he chose the spiritual mode of ‘ahimsa’ as enunciated by the great Indian leader Mahatma Gandhi to impress upon India the plight and predicament of the people of Tamil Eelam.

The levels to which the Tamil people or more specifically, the LTTE cadres, are prepared to go for their freedom mirrors not only a deep passion for their liberation, but indicates the phenomenal degree of oppression they have been subjected to. It is only those who experience intolerable oppression of such a magnitude, of being threatened with extinction, that are capable of supreme forms of self sacrifice as we have seen from Thileepan’s episode.

Thileepan, who had travelled to Delhi as part of LTTE leader Vellupillai Pirabakaran’s delegation before the signing of the Accord, was informed of the content of the dialogue that had taken place between the Indian Prime Minister and the LTTE leader.

With the knowledge that there was an unwritten agreement between Indian Premier Rajiv Gandhi and Mr. Pirabakaran and that it had not been implemented, he felt that his people and the struggle had been betrayed and decided on a fast-unto-death demanding the fulfillment of the pledges.

When news of Thileepan’s fast-unto-death and the deteriorating political situation between the LTTE and the Indian Peace Keeping Force reached us, we decided to leave India for Jaffna.

My joy at reaching the shores of Tamil Eelam after so many years was contained by the gloom that hung in the air. Thileepan was a few days into his fast till death and the population of the Peninsula was seriously concerned and wholeheartedly behind the non-violent campaign of a single individual seeking justice from the world’s largest democracy. Subsequently, our first priority after our arrival in the Peninsula was to visit Thileepan encamped at the historic Nallur Kandasamy temple, the cultural and spiritual centre of the Jaffna Tamils.

Thileepan’s decision to single-handedly take on the credibility of the Indian state was not incongruous with his history of resistance to state oppression as a cadre in the LTTE. He had faced battle on several occasions in defence of Jaffna during Kittu’s time and suffered serious abdominal wounds in the process. He was well known for his astute understanding of the politics and mindset of his people and emerged as a radical political leader.
The senior LTTE women cadres often speak of his staunch advocacy of inducting women into the national struggle and is remembered as one of the founding fathers in the promotion of women’s issues. With such a history it comes as no surprise that he endeared himself not only to the cadres but the people of Jaffna also.
My husband, LTTE theoretician Anton Balasingham, met Thileepan during the pre-Accord talks when he shared a hotel room with him in Delhi and quickly grew very fond of this affable fellow. It was an extremely painful and emotional experience for Bala to meet him again in Jaffna, in totally adverse conditions, with Thileepan’s life slowly ebbing away.

As we entered the premises of the Nallur Kandasamy temple we were confronted by a sea of people seated on the white sands under the blazing sun. The air was thick with collective emotion and solemnity. This fading young man on the platform obviously embodied the political sentiments and aspirations of his people.

But it was more than that also. Thileepan’s fast had touched the spirit of the Tamil nation and mobilised the popular masses in unprecedented solidarity. One could sense how this extraordinary sacrifice of a fragile young man had suddenly assumed a formidable force as the collective strength of his people. Thileepan’s fast was a supreme act of transcendence of individuality for a collective cause. Literally, it was an act of self-crucifixion, a noble act by which this brave young man condemned himself to death so that others could live in freedom and dignity.
With deep humility, Bala and I mounted the platform to speak to the reposed Thileepan. Already several days without food or water and with a dry cracked mouth, Thileepan could only whisper. Bala leaned closer to the weakened Thileepan and exchanged words with him. Naturally enough, Thileepan enquired about the political developments. We left soon afterwards, never to see him alive again.

As Thileepan’s fast moved on in days, he was no longer able to address the public from the podium and spent much of his time lying quietly as his condition steadily deteriorated. As Thileepan grew visibly weaker in front of his people’s eyes, their anger and resentment towards India and the IPKF grew stronger. The sight of this popular young man being allowed to die in such an agonising manner generated disbelief at the depth of callousness of the Indian government and the Indian Peace Keeping Force.

All that was required to save Thileepan’s waning life was for the Indian High Commissioner, Mr. Dixit, to humble himself and meet and reassure Thileepan that the Indian government would fulfil its pledges to the Tamils. In fact Delhi ignored Thileepan’s fast in the early stages as an isolated idiosyncrasy of an individual, but later became seriously concerned when the episode gathered momentum and turned into a national uprising with anti-Indian sentiments. Delhi’s concerns compelled Mr. Dixit to pay a visit to Jaffna to ‘study the situation’.

On the 22nd September, the eighth day of Thileepan’s fast, Mr. Dixit arrived at the Pallaly airport where Mr. Pirabakaran and Bala met him. Bala told me later that Mr. Dixit was rude and resentful and condemned Thileepan’s fasting campaign as a provocative act by the LTTE aimed at instigating the Tamil masses against the Indian government.

Mr. Pirabakaran showed remarkable patience and pleaded with the Indian diplomat to pay a visit to Nallur and talk to the dying young man to give up his fast by assuring him that India would fulfil its pledges. Displaying his typical arrogance and intransigence, Mr. Dixit rejected the LTTE leader’s plea, arguing that it was not within the mandate of his visit.

Had Mr. Dixit correctly read the situation and genuinely cared for the sentiments of the Tamil people at this very crucial time, it is highly probable that the entire episode of India’s direct intervention in the ethnic conflict would have taken a different turn.

But Thileepan’s willingness to sacrifice his life in such a way touched the spirit of the people and his unnecessary tragic death on 26th September planted deeply the seeds of disenchantment with the Indian Peace Keeping Force.
(This is a compilation of extracts from “The will to Freedom Written by Adele Balasingham.It is posted to denote the 25th death anniversary of Rasiah Parthiban Thileepan that falls on September 26th)
DBS