There is room for a movement like MIRJE today. – Fr. Paul Caspersz 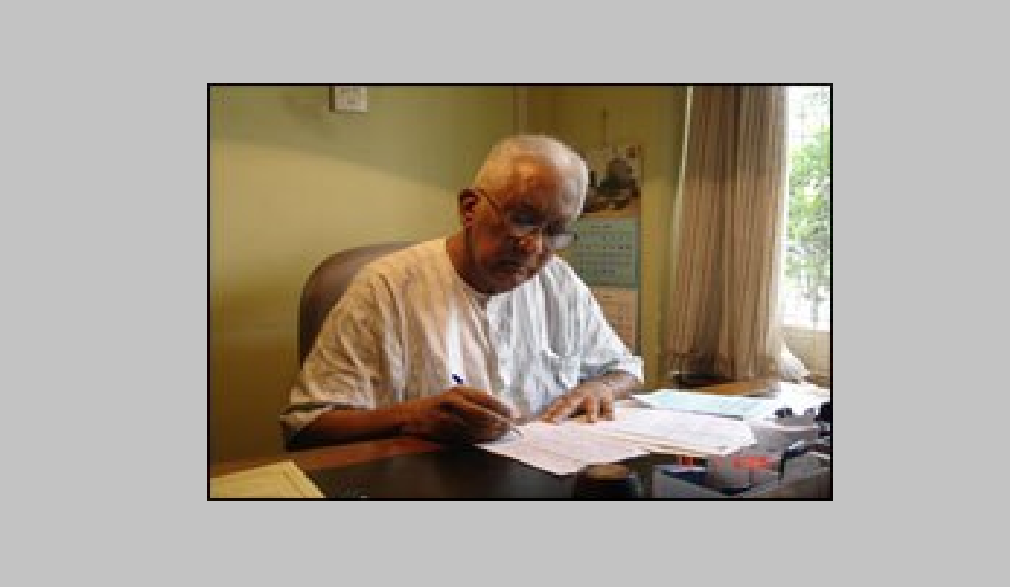 Fr Caspersz currently lives in Negombo in the Jesuit Priests’ Retiring Centre. He is a nonagenarian and is partially bed ridden. I frequently visit him as I consider it is my duty and responsibility. I remember I first met him in 2000 when I was an undergraduate in the Peradeniya University. With his invitation to work at Satyodaya I was a member there till 2006 during which time I also completed my BA and MSc studies from the same university. I was so fortunate to live at Satyodaya and to broaden my scope of work in the civil society sector and also to develop my ideological foundations towards peace, social justice, and minority rights.

Fr Caspersz is a Colombo born and Oxford educated person. He co-founded Satyodaya (meaning, “dawn of the truth”) in 1972 together with an equally progressive individual, Bishop Leo Nanayakkara. Prior to this initiation, he served as the principal at St Aloysius College, Galle.

Around 1960 – 1970, Fr Caspersz took liberation theology seriously. He joined forces with different lines of radicalization movement of the church initiated in Sri Lanka by very few Catholic, Anglican, and Protestant priests. Influenced by the radical movements of Latin America and Asia, Fr Caspersz started to search God among people. He said, “The church will be where the people are”.

He will be remembered for good many years in the future for founding the Movement for Inter-Racial Justice and Equality (MIRJE) in 1979 along with a group of activists. MIRJE is still regarded by many as one of the most credible and uncompromising movements in the socio political arena in Sri Lanka. Prior to MIRJE, Fr Caspersz also initiated the Coordinating Secretariat for Plantation Areas (CSPA) in 1974 to provide direction and leadership to individuals and civil organizations to protect and promote the rights of tea plantation workers.

After many years of working as the director and advisor of Satyodaya, he is now at the retiring centre. In one of my encounters with him, recently I was able to interview him by the side of his bed. Please note that his mental powers currently are not that sharp as they used to be during his active life. I posed him some simple questions and his answers are recorded here below.

Question: What do you remember in your childhood?

That does not inspire me very much now. I started school at Good Shepherd Convent at Kotahena and went onto St Benedict’s and St Joseph’s.

Question: Why did you want to be a Jesuit?

At that time I read the History of England by T F Tout. One of its chapters, titled “Counter Reformation” and the part the Jesuits played in it moved me. From that time, though not very definite, I began to think that I would like to become a Jesuit.

Question: Where were you ordained?I was ordained in Naples in Italy.

Then I went to England and did my secular studies at Oxford and read Politics and Economics. Then I came back to Sri Lanka. I was a teacher before taking up the responsibility of principal at St Aloysius College Galle.

Question: Then you started Satyodaya with Bishop Leo Nanayakkara in 1972. How did you first encounter with him?

He was a friend of Fr [Tissa] Balasooriya with whom I had friendship. When Fr Balasooriya started his centre [the Centre for Society and Religion – CSR] I also started Satyodaya.

Question: How were you influenced by Liberation Theology?

Question: Why were you so interested to promote the inter-religious harmony among people in Sri Lanka?

It was a time when the troubles between the Sinhalese and Tamils were so intense. Around that time I founded the movement MIRJE which some did not like the acronym as they argued that the Sinhalese and Tamils were from the same race. Therefore they wanted “inter-ethnic” being in it. But R (racial) became fitting to the term and we went ahead with that. I was the founder and president of MIRJE for several years.

Question: I remember at Satyodaya we had members from many ethnic groups and faith. How did you encourage that to happen at Satyodaya?

This is because I wanted Satyodaya to be also like Sri Lanka with many ethnic groups and languages. At that time Tamils had difficulties especially during the first period of SLFP (Sri Lanka Freedom Party) [during 1972 – 1975], when they started the land reforms. Then I began to be interested at [tea] plantation workers. We did lot of things to get their citizenship.

Question: Even today, inter-ethnic and religious harmony is a challenge. What have you got to say about it?

In fact I was thinking about it yesterday. There is room for a movement like MIRJE [today].