The writing on the campus wall 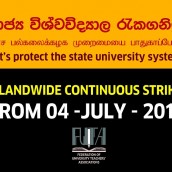 Ahilan Kadirgamar
As with most other societies ravaged by civil war, Sri Lanka’s public institutions have all suffered. Beginning in the late colonial period and continuing into the post-colonial era, the state made critical economic and social investments, particularly in universal free education and health care as well as a strong public service. Indeed, it was these investments that held the country together during the decades of war. The end of the war provided an opportunity to rebuild those state institutions and restructure the state to address the grievances of the minorities.
Unfortunately, three years after the war, the state including its public institutions, have themselves been deteriorating and polarising society rather than contributing towards democratisation and social reconstruction. Significant among such declining institutions are the state universities. In recent weeks, university teachers have opened a broader debate about state investment in society through their trade union action.

In the mid-1970s, Sri Lanka was considered a model developing nation with impressive social indicators of literacy, infant mortality and life expectancy. However, the late 1970s saw the emergence of an intertwined crisis generated by neo-liberal open economy policies and armed conflict. The neo-liberal reforms came with the repression of trade unions and set the trend of cuts in social welfare as market forces were let loose and the costs of the war ballooned. Furthermore, the functioning of public institutions during decades of conflict owed much to the resilience and commitment of teachers, doctors, nurses and public servants who persevered despite meagre resources, a devastating war in the North and East, and a crippling insurgency in the South in the late 1980s which particularly targeted universities and hospitals.

Rather than reversing the trends of those dark decades, the post-war years have seen further politicisation of state institutions under an emerging authoritarian oligarchy along with a second wave of neo-liberal policies. The 18th Amendment — the only constitutional amendment after the war — has given greater powers to the President and undermined the independence of commissions relating to the police, judiciary and human rights. The foreign service and the public administration are increasingly packed with political appointees and former military officials. Under the rubric of development and without consideration of the global financial crisis, widespread financialisation of the economy with the support of global finance capital has taken hold, even as purportedly independent liberal economic institutions such as the Central Bank and the Securities and Exchange Commission are being manipulated by the business elite with political connections. Neo-liberal policies have led to both cuts in social welfare and mounting cost of living. As with the late 1970s, post-war Sri Lankan society is now confronted with the twin problems of authoritarianism and neo-liberalism.

Voices from the academic world

In this context, over the last two years Sri Lanka has witnessed a number of protests and strikes, with the most sustained and organised protests emerging in universities led by both staff and students. The deterioration of the universities began with the cuts to education during the previous governments and policies envisioned by the World Bank on rationalisation and privatisation of education, which then accelerated with increasing political patronage including open support by some sections of university administrators and staff for the current government in the recent elections.

However, it is the aggressive approach of the current Higher Education Minister that galvanised the universities. Persisting low salaries of university staff, repression of student protests, introduction of compulsory leadership training by the military for university entrants, politicisation including political appointments to administrative positions and attempts to railroad in university reforms, which included a neo-liberal bill to initiate private universities while undermining the state university system, have all contributed to the radicalisation of university staff and students. With the government unheeding of their demands last year, the Federation of University Teachers Associations (FUTA) initiated a powerful strike starting on July 4 that has been national in character with state universities from all regions of the country participating.

In the days leading to the strike, some of the same forms of attacks and intimidation that dissenting activists and journalists have faced, are now confronting university teachers. FUTA President Dr. Nirmal Ranjith Dewasiri has got death threats over the phone and suspicious persons claiming to be from the Ministry of Defence had been lurking near his home and inquiring about him and his family.

There are also signs of the law and law enforcement being twisted to pressuring an end to the strike. Such acts of intimidation and attacks in the State media forebode a nasty response from the repressive arms of the state if the strike is not resolved in the near future.

What is unique about the university teachers’ strike is that its demands go far beyond the issue of salaries. They are challenging the increasing politicisation and militarisation of education and calling for an increase in national spending on education from a meagre 1.9 per cent of GDP, one of the lowest in the world, to the UNESCO recommendation of six per cent of GDP. With public meetings and a signature campaign on the streets gaining momentum, the strike is gaining support from the public as the issues resonate with the political and economic grievances of ordinary people.

As two academics recently wrote in the local press, the universities have been waking up from a long slumber with an “academic spring.” Even as university teachers are preparing to face the repression of an authoritarian state, they are also attempting to make this a movement that democratises and transforms the universities. If this movement gains momentum, it could also galvanise other public sector workers and revitalise public institutions. The government, however, has not shifted from its attitude of post-war hubris; its approach is one of repression and breaking constituencies with political patronage. The coming months will show whether the protest movements taking hold in the country can challenge authoritarian rule and neo-liberal policies that continue to weaken Sri Lankan society. Will they succeed in salvaging democratisation and social welfare out of what is left of the diminishing post-war opening?

(Ahilan Kadirgamar is a democracy activist based in Sri Lanka.)
The Hindu