The World Press Freedom Day, 2020: Release all social media activists who are under arrest.- FMM 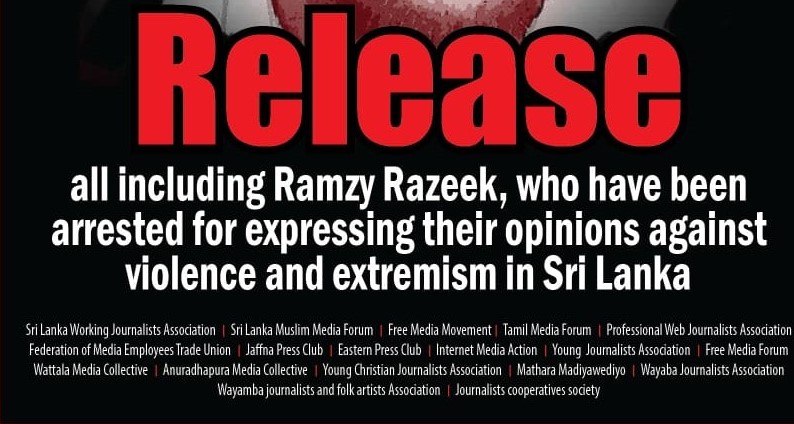 Authorities should understand the social responsibility of the media in the present situation – Free Media Movement.

The Free Media Movement stresses that the escalation of the covid-19 pandemic has further accentuated the necessity of an impartial and socially responsible media sans any party affiliation.

Covid-19 is spreading throughout the world in a political context in which the majority of the world community is dominated by authoritarianism rather than democracy. It can be observed, that in response to this state of emergency, most governments act with authoritarian measures rather than the governments’ democratic structures and actions that respect the democratic rights of the people. Media is at the forefront among the sectors that have been challenged by this trend. The Free Media Movement observes that the same applies to Sri Lanka.

In Sri Lanka as seen elsewhere in the world, there is a widespread dialogue developing, ranging from the role of the health sector in the prevention of this severe pandemic, to various measures adopted by the government to ensure public welfare. The Free Media Movement wishes to point out that instead of creating a democratic space and environment conducive to such dialogue, certain decisions taken by the government discourage such open dialogue. It should be reminded that the Sri Lanka Human Rights Commission has even directed the attention of the Acting IGP to such decisions.

The Free Media Movement further points out that the media has the right to criticize with reason and question all responsible mechanisms including the State. Such media practices will enable the formulation of effective state policies that will be appropriate to resolve crisis situations. The role of social media users who are knowledgeable and loyal to the public are also extremely important in this task.

Accordingly, the media institutions, journalists and social media users should be provided with the opportunity to act impartially without fear and to contribute to the restoration of society from the severe epidemic. And on the World Press Freedom Day, the Free Media Movement request all responsible stakeholders to release the social media activists who are currently arrested because of the critiquing nature in their reporting.