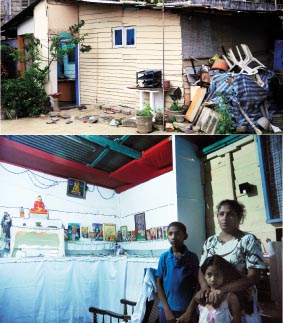 And then they went for the Christians – and even the Buddhists. A new group called the Sinhala Ravaya is making their presence felt across the island, carrying out systematic attacks on what they deem to be illegal places of worship.

On Monday (18) members of this new group laid siege to the home of a Christian pastor, threatening his family and demanding that religious services cease. Last Friday (15) members of the Sinhala Ravaya stormed into a house in Walauwatta, Nawala, throwing religious texts on the floor and accusing the residents of carrying out unethical religious conversions.

Terror in Nawala
It was around 7:30 on Friday night when the little wooden hut in Walauwatta, where the couple Vincent and Nilushi Rasika reside, was subject to a sudden intrusion of people, who materialized as if out of thin air.
The hut was not just a residence – it was considered a place of healing. Every week, especially on Wednesdays and Saturdays, crowds of people came to this little unassuming hut to offer prayers for a number of ailments, believing they could be healed. Many of them continued visiting even after being healed to offer bodhi puja in the evenings. The hut itself has a Buddha statue prominently displayed on a pedestal in the centre of the room, but it also has statues of Jesus Christ, Mother Mary, Sai Baba and several Hindu deities, including Sarasvati and Vishnu.

The reason for this, Nilushi explains, is that many of the people who visit are of different religions, and they feel they should not turn people away simply because they have different beliefs.

Nilushi encountered a crowd of around 50 people on Friday night, five of whom were monks. They arrived in a convoy of three vans and four three-wheelers and claimed to be from the Sinhala Ravaya group. “They came shouting, looking for the children,” Nilushi recalled. The crowd accused Nilushi and Vincent Imaduwa (Nilushi’s father) who were both at the centre at the time, of harbouring children and selling them. “We have children of our own. We would never do such a thing,” Nilushi said. The group had then asked for their IDs, which Nilushi had refused to provide. “We said we would only give our IDs to police dressed in uniform,” she explained. They had then begun rifling through the house, making off with some money, some of the young daughter’s earrings and even a CD of her cartoons, as well as one or two of the religious statues. The Buddhist flag, which was on the wall, was torn down, books of religious texts thrown on the floor.

Worst of all, the men kept trying to assault Nilushi, raising their hands to hit her while her terrified daughter screamed helplessly in the background. It was all caught on tape by a reporter from a private TV news station, who later confirmed that the mob did get unruly and attempt to assault Nilushi. Nilushi’s and Vincent’s attempts to reason with the mob went unheard. Vincent, too, was knocked around and is in pain today – leaning on his walking stick. He has just got back from the hospital, where his hip was bandaged.

Later on, some of the group returned and tried to rearrange the statues, taking pictures all the while. “We told them, please don’t do that. That’s not how they were,” Nilushi said. “It is not we who should be arrested, but the monks. They did not even allow us to speak,” Vincent said. Most ironic of all is the fact that Nilushi’s family are devout Buddhists – so much so that they are strictly vegetarian. “We don’t bother anyone, and we don’t do any harm,” they said. They believe that the group acted on a false tipoff.

Nilushi said she is afraid to be alone at the small house during the day, especially when she hears visitors.
Welikada Police said the incident in Nawala was only a small fracas, nothing to worry about. The Welikada Police had recorded statements from the people of Sinhala Ravaya, and said Nilushi had not been assaulted, even though there was clear evidence on tape of the mob attempting to hit her. The monks’ statement had merely said that the group had gone to the house to inspect it, which the family had not allowed them to do, and there had been an angry exchange. The monks had then said that the family shouldnt be displaying different religious statues together, at which point they had explained that it was part of a religious ritual. However, the situation had soon been resolved, the Welikada OIC said.

It might be resolved on paper, but the residents of the religious centre want their stolen statue back, and are still in shock over what has happened. ‘Never mind what happened here…Tell everyone what a service we do to the community,” Sampath, Nilushi’s husband said. He added that the only thing he wanted returned was the statue, which the group had taken with them.

Pastor Pradeep Kumara’s house in Katuwana, Weeraketiya was attacked last week – but this isn’t the first time there have been clashes between him and a group of monks. On December 9, a group led by Ven. Omalpe Sobitha Thera of the JHU, and a few others attacked his church, while around 75 people were worshipping there. The previous day, this group had threatened the pastor, saying “You can’t have a prayer centre here. Close it down.” Kumara said he has video evidence of this incident.

At around 9:45 am the next day, the group returned and attacked the building, damaging vehicles, equipment and furniture, and defacing a statue of Jesus Christ. “Leave this place or be killed,” the pastor was told. Undeterred, Kumara complained to the police, and even filed a petition at the Supreme Court.
The Court gave leave for the worship centre to continue holding services and also ordered police protection at the place.

The case was taken up again this week, and once again the Supreme Court ordered that the worship centre continue operating, although the final judgment has not yet been passed.

Kumara was in Colombo when the Sinhala Ravaya mob attacked – it was his wife and children who bore the brunt of it. Kumara’s wife was returning with their children (she had gone out to buy medicine, for a child who was sick) when she saw a group had forced the gate open and had broken into the premises. They were in the process of damaging the property. When they saw Kumara’s wife approaching, they had threatened her, causing her to call her husband. In a panic, Kumara called the police. Four constables arrived, but could not control the angry mob. Eventually, STF personnel were also called to the scene.

By this time, Kumara’s wife was inside the house with the children, but the pastor feared greatly for their safety as the group continued to damage the property outside the house. They even scolded the children in abusive language, pastor Kumara said. The incident took place between 5 pm and 8:30 pm, and the crowd only left once they had forced Kumara’s wife to promise there would be no more worship sessions conducted at the house.
Kumara further said that though he heard the Sinhala Ravaya were behind the attack, he also believed that the group had gotten their strength and inspiration from the Bodu Bala Sena (BBS) group.

The Police Media Unit confirmed that a group including monks (they were unsure from which temple the monks were from) had stormed the pastor’s premises in Weeraketiya and added that police had tried to stop them.
It is uncertain where the Sinhala Ravaya group sprung up from. Executive Committee member of the Bodu Bala Sena, Dilantha Withanage, said the group is not officially connected with them in any way. He added that he had heard many stories of illegal and unethical conversions, and said if the organizations targeted were operating legally, the Bodu Bala Sena would not support attacks on them. “We have no official links with the Sinhala Ravaya. Some people on Facebook have put up posters congratulating both of us together… but this is to create the illusion that we are working closely with them. This is not so,” Withanage said.

Whatever their origins, the group has set a disturbing trend of self-appointing themselves as unofficial police officers – conducting ‘raids’ and even demanding identification as if they were from the armed forces. What’s more, this week’s attacks have even been carried out against devout Buddhists who were not carrying out religious conversions as they initially assumed.

The actions of the Sinhala Ravaya are in jarring contradiction to a religion which promotes peace and tolerance – even stooping to bullying and terrifying young children.
SL