The unity of the Tamil leadership needed to fulfil political aspirations of Tamils – S. Jaishankar 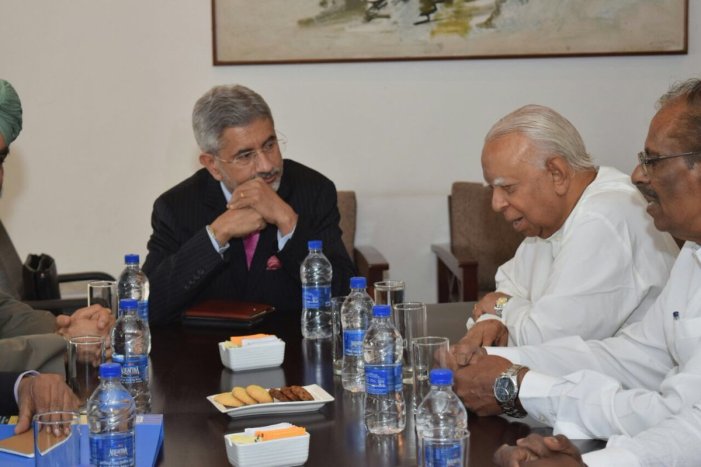 Jaishankar’s meeting with the Tamil National Alliance took place in the backdrop of TNA Parliamentarian M.A. Sumanthiran’s return from Geneva where the United Nations Human Rights Commission officials were urged by Sumanthiran not to allow the Sri Lankan Government to make alterations to the UNHRC resolution which was co-sponsored by Sri Lanka in 2015.

Sumanthiran also urged the UNHRC officials not to give more time to Sri Lanka in implementing its commitments to the resolution.

During the meeting with the Indian Foreign Secretary, the TNA representatives briefed him on the Tamil issues in a manner ‘hoodwinking’ him on the differences which prevail within the four constituent parties in the alliance.

The government is accused frequently by the Tamil National Alliance that nothing has happened in a constructive manner to resolve the political issues as well as the humanitarian issues in the North and the East since the separatist war ended in 2009.

However, the observation made by the Indian Foreign Secretary on the Tamil political scene has clearly indicated the drawbacks in TNA remaining as a united outfit in voicing the rights of the Tamil people.

India for more than three decades, not only interacted closely with the Sri Lankan moderate Tamil leaders, and even with the militant outfits in a bid, for the political aspirations, of Tamils, in the North and the East, to be fulfilled.

It is not only in local politics but even when India involved itself in solving the Sri Lankan Tamil issue, the Tamil political parties or the militant outfits couldn’t come together in dealing with the ethnic issue.

Even on the international scene, when a healthy environment emerged with the support of several powerful countries to reach a durable political solution to the North-East crisis the Tamil political parties had failed to grab the opportunity.

So, it is clear that apart from the shortcomings in the southern political scene in dealing with the North-East issues, the fragmented state of the Tamil political parties created more problems in taking a common stance to reach out for a solution to the Tamil crisis.

India had learnt a bitter lesson

India had learnt a bitter lesson when the country signed the Indo-Lanka Peace Accord and by sending its peace keeping force to implement the Accord with the merger of the North and East.

More than a thousand Indian soldiers sacrificed their lives to bring about peace in the North and the East. Finally India’s flamboyant Prime Minister Rajiv Gandhi’s life was also snatched for his involvement in the Sri Lankan issue.

Several scholarly Tamil political leaders such as A. Amirthalingam, Dr. Neelan Thiruchelvam and Lakshman Kadirgamar lost their lives in a brutal manner for their attempts in reaching a solution to the Tamil crisis in a democratic manner.

The current crisis situation within the Tamil National Alliance and the recent emergence of the Tamil People’s Council have even highlighted the failures in Tamil political leaders taking a united stance in resolving the ethnic issue.

Another interesting development emerged a few days ago in the Tamil People’s Council (TPC) with Tamil National People’s Front (TNPF) leader Gajendrakumar Ponnambalam who is one of the founders of the TPC requesting some of the TNA members who remain as part of the TPC not to have one leg in the TNA and another in the TPC. Gajendrakumar Ponnambalam openly criticized the double standards of some of the TNA members in the TPC.

The General Secretary of the Illankai Tamil Arasu Katchchi (ITAK) and the Eastern Provincial Council Minister of Agriculture K. Thurairajasingam at a recent meeting in Trincomalee had even criticized the Tamil diaspora’s manipulations without understanding the ground realities in the country.

Therefore, it is clear that there are hidden hands remaining active making the Tamil political scene a total mockery.

The Temple Trees incident had shown the growing disenchantment of the Tamil civilians over their political representatives.

Therefore, with all the ‘muck’ in Tamil politics, the TNA seeking Indian help or looking for the international community to involve in addressing the grievances of the people in the North and the East could be considered as a farce.

So with India’s vast experience in handling several of its critical internal and external issues, the Indian Foreign Secretary S. Jaishankar was very precise in reading the pulse of the Tamil polity in Sri Lanka and emphasizing on the unity of the Tamil leadership to fulfil the political aspirations of Tamils.