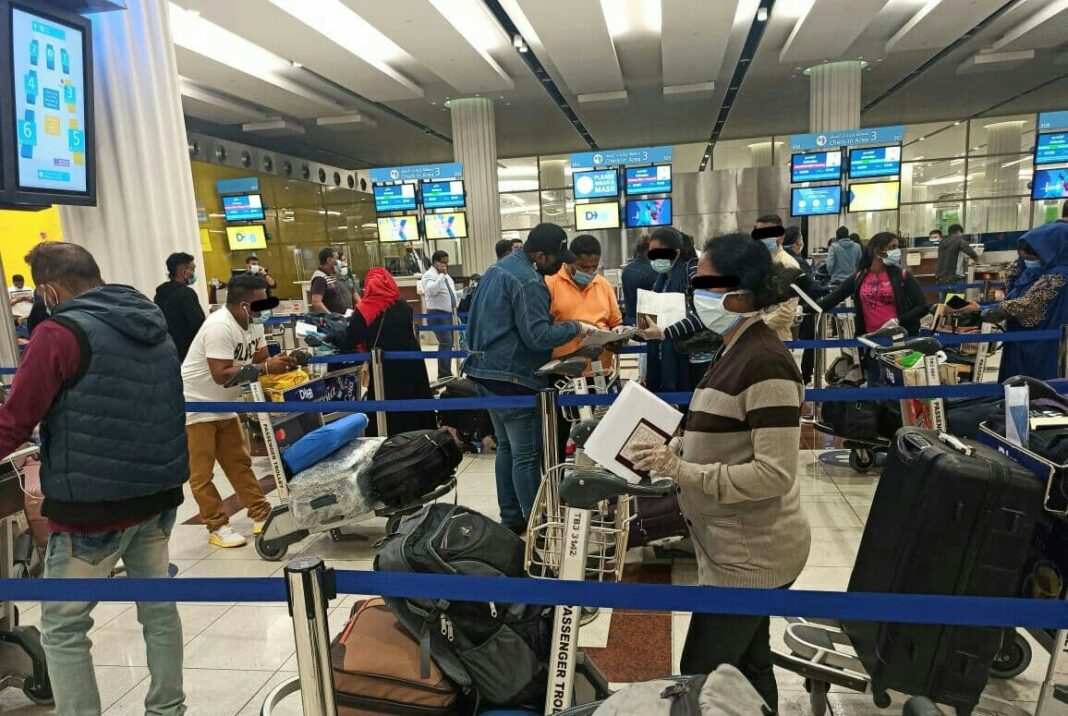 On April 28th 2020, shaky footage taken on a smartphone showed hundreds of migrant workers in a country in the Middle East, crowded into an empty public park and asked to wait for answers for their inquiries on being repatriated back to Sri Lanka. The woman recording the video said when they approached the embassy they had been turned away, and told to go back to their housing. However, having lost jobs and without an income, this was no longer an option for them. The woman says that she and others like her are suffering through this hardship to be able to provide for their children.

“Our country has forgotten us,” she says.

On June 8th, a series of videos showed Sri Lankan women migrant workers who were pregnant and afraid to leave their housing in the Middle East due to the widespread nature of COVID-19 in the country. They were unable to access medicine or healthcare as they were without an income, and were not entitled to government aid in the countries to which they had migrated for work.

“We don’t know when the next flight will be, and we have been waiting for months to return home to our families. Our spouses in Sri Lanka are without jobs and incomes as well,” one of the pregnant women says.

On July 28th, several media outlets, including EconomyNext and NewsFirst, reported that Jordanian police fired tear gas on a group of Sri Lankan migrant workers who were engaging in talks with embassy officials to secure their repatriation back to their home country. Having been without work and wages for five months, and having been promised repatriation at a much earlier date, the workers didn’t allow the officials to leave as they expressed their grievances, upon which police were called in. About 20 workers were hospitalised due to respiratory difficulties caused by the tear gas.

“Take us back to Sri Lanka quickly, otherwise we will die in this country,” a woman says.

The repatriation of Sri Lankan migrant workers from the Middle East has been a weary and inadequate process for the thousands now without work and an income, often without a place to live too. Several have resorted to sleeping in parks as they await the news of another repatriation flight, and been provided with some assistance from the Sri Lankan embassies in the respective countries, welfare organisations or private donors.

These flights were delayed on two occasions, firstly when the Government of Sri Lanka claimed it no longer had quarantine facilities to accommodate returning workers, and secondly when flights were halted due to the widespread Minuwangoda and Peliyagoda clusters in October.

Over the months of November and December, Sri Lankan Airlines has operated four such flights from Dubai to Colombo, and one from Abu Dhabi to Colombo. Of the full capacity on these flights, an average of 60 migrant workers have been able to return home on each flight, with the flight from Abu Dhabi carrying 25 workers. It is essential to note that this ‘return home’ was made possible not because the Government of Sri Lanka paid for their passage, but because private donors came forward to sponsor tickets for these workers to come home.

This has been made possible by a network of relief organisations in Dubai and volunteers in both countries, and donors across the globe. Donors purchased tickets directly from Sri Lankan Airlines for individual workers, based on the list of those registered for repatriation with the Sri Lankan embassy in their country of employment.

Calculating at an average ticket value of 1,200 United Arab Emirates dirhams, which is equivalent to 62,000 Sri Lankan rupees, over 15 million LKR has been spent by private donors and well-wishers to facilitate the return of Sri Lankan migrant workers from Dubai.

On return, these migrant workers are allocated to free government quarantine facilities. Photos that circulate from these locations show that the sleeping areas themselves house upto about 30 persons, making it almost impossible to practice safe social distancing to ensure the virus doesn’t spread.

In October this year, the President’s Office reported that following corporate, individual donations and direct deposits, the ‘Itukama’ COVID-19 Healthcare and Social Security Fund balance stood at Rs. 1,659,015,132 (one billion six hundred fifty-nine million fifteen thousand one hundred thirty-two). A month later, a release from the President’s Media division noted that only Rs. 400 million of the fund had been spent up to that point. It is essential to question why this fund was not used to repatriate the many stranded Sri Lankan workers, and house them in adequate quarantine facilities.

Former Minister Mahindananda Aluthgamage told the media that the Kuwaiti government had ‘struck us with a bomb, as they have sent their COVID 19 patients here’. This dehumanising language ignores the fact that these workers are Sri Lankan citizens deserving of support from their government.

Many of the men and women migrating to find work do so due to extreme poverty and indebtedness that stem from the lack of gainful employment opportunities available to them in their rural hometowns. According to welfare organisations coming to their aid, several of them have also been misled by the agencies through which they arranged their foreign employment. They are encouraged to travel to the Middle East or Gulf on visit visas, noting that a job is guaranteed on arrival, and charged exorbitant arrangement fees. This was true even in mid-2020, in the context of the pandemic when there was less demand for jobs in those countries. As they return home with limited earnings, most exhausted after having to survive the last few months, they will no doubt find themselves in bigger debt, and without sustainable employment in Sri Lanka either.

Despite being lauded by politicians and business leaders for the remittances their work overseas contributes to Sri Lanka’s GDP, these migrant workers have been forgotten in more ways than one. As of November, 90 deaths were reported from countries across the Middle East, with Saudi Arabia and Qatar accounting for the largest amounts. These deaths of Sri Lankan citizens are not accounted for in the country’s local death toll. Termed ‘rataviruwo’ or the country’s heroes for their contribution to the Sri Lankan economy, it is unacceptable that they are treated as expendable labour reduced to a few numbers in annual calculations, and are left without support in an hour of dire need.

Migrant workers have had to rely on the generosity of private donors due to the fact that the Sri Lankan government did not adequately provide for them a standard of care it owes its citizens. Still, for workers returning home, the generosity of those contributing to their tickets is more than they can express.

“I don’t have words to thank you,” said a young woman whose return was made possible by private donations this month.

In late December, the government announced plans to resume the arrival of tourists in the country, who will visit Sri Lanka in controlled ‘travel bubbles’ to select destinations under strict guidelines. The first such flight of tourists from Ukraine landed at the Mattala International Airport on December 29th. Researchers at the Institute for Health Policy Sri Lanka pointed out that Ukraine has 13 times as many COVID-19 cases and 50 times as many deaths among the population than Sri Lanka.

Shortly after the flight landed, photos circulated in the media showing a grand welcome for them, and also showed the tourists not wearing masks properly. Stranded Sri Lankan migrant workers in the Gulf took to Facebook to express their feelings at being deeply let down by their country. They say they don’t have enough money to buy tickets to return, and ask why efforts couldn’t be made to bring ‘our own people’ back home.

“Those who are nourished by the money sent by Sri Lankans working overseas are bringing foreigners into the country. Shame, Mr. Gotabaya, I am speaking as someone who voted for you,” one such post said.

It is a shame indeed that leaders are barely able to meet the needs of the people who voted for them, when those people are in complete desperation.

Year on year, it is overwhelming how Sri Lankan generosity via private donors constantly comes through in the face of a disaster. At the same time, it is frustrating that state relief is failing so many people – like these workers, especially at a time like this – that they have to depend on private donors to be able to return home.

The writers is a member of the Liberation Movement.