“The truth will prevail, I didn’t do any wrongdoing” says Shani Abeysekara, Sri Lanka’s “Sherlock Holmes” 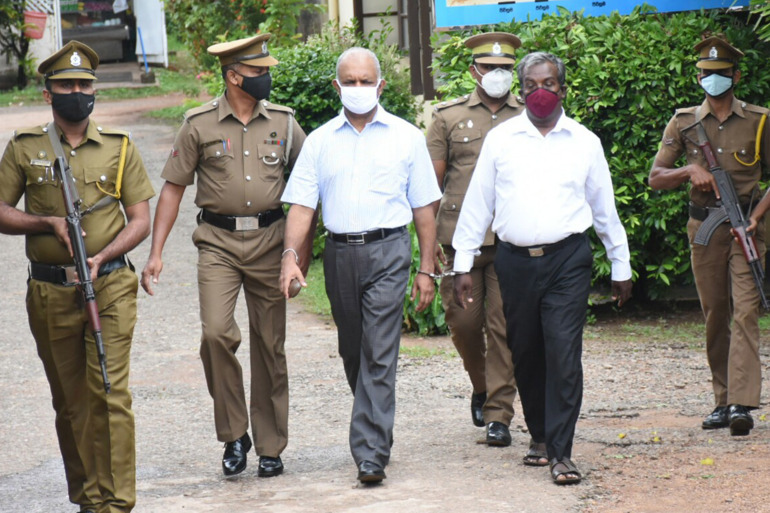 AlJazeera : Sri Lanka’s top criminal investigator insists he has done nothing wrong after he was released on bail earlier this week after more than 10 months in prison remand in a murder case in which a senior police officer has been implicated.

Two days after Rajapaksa took office as president in November 2019, Abeysekara was demoted to the role of a personal assistant to a superior officer.

Shani Abeysekara, 59, the former senior superintendent of police who headed the Criminal Investigation Department, is accused of fabricating and concealing evidence in the case against former Deputy Inspector General of Police Vaas Gunawardena, his son and four other police officers.

The group was convicted and sentenced to death for the abduction and murder of Colombo-based businessman Mohamed Shiyam as a contract killing for $50,000 in May 2013.

“The truth will prevail,” Abeysekara told Al Jazeera. “I am an honest and hardworking officer. In my whole career, I didn’t do any wrongdoing, that’s all I can say.”

Abeysekara’s modest two-bedroom flat in Colombo is only a few hundred metres away from the prison where he was held.

He appeared calm and confident, despite suffering a heart attack during his imprisonment, coupled with other health issues.

“People who live according to their conscience find that it’s not hard to face anything. They know that if they do something wrong, they have to face the punishment,” he says.

“I won’t have to face punishment because I have not done any wrong.”

Abeysekara was investigated despite Vaas Gunawardena, considered close to President Gotabaya Rajapaksa, admitting to being in possession of the weapons that were used to kill the businessman.

A police constable posted at the DIG’s residence also testified that he had loaded the weapons into the officer’s vehicle on the day of the businessman’s murder.

The Court of Appeal in its June 16 bail order said “the allegations against the suspect Shani Abeysekara are a result of falsification and embellishment and a creature of afterthought”.

“Upon the statements of apparent backers and supporters or collaborators of the convicted murderers, purported facts have been reported …. against the suspect in a blatant attempt to frame allegations through fabrication of false evidence,” Justices Bandula Karunarathna and Ratnapriya Gurusinghe said in a scathing critique of the police and legal machinery.

“However, no credible evidence had been brought to the attention of the court” in the case against Abeysekara, they added.

In response, Justice Minister Ali Sabry told Al Jazeera that the Court of Appeal order shows “exactly how strong our democracy and the rule of law is and how independent our judiciary is”.

“So I can be proud of the judiciary the way they have acted,” he said.

When asked about the court’s view that allegations against Abeysekara were false, Sabry said, “The observation has to be taken into consideration by the police … As the justice minister, I don’t run the police.”

Sabry said the police should now “find out what is there and if there is sufficient proof of allegations, an inquiry has to be launched”.

Police spokesman, DIG Ajith Rohana, told Al Jazeera the department “respects the order of the Court of Appeal and will take action accordingly if there are guidelines or recommendations (to be followed)”.

In his 34-year career, Abeysekara had led investigations into dozens of high-profile cases, many of them involving human rights violations and extrajudicial killings.

Often, the cases also involved senior members in the government and high-ranking military and police officers. Many say Vaas Gunawardena was shielded by Gotabaya Rajapaksa when the incumbent president served as the defence secretary from 2005-2015.

The senior policeman threatened Abeysekara with death during interrogation, an offence that earned him five years of rigorous imprisonment.

Touted as one of the most “diligent” and “honest” officers, these qualities also made Abeysekara a target to be silenced.

Two days after Rajapaksa took office as president in November 2019, Abeysekara was demoted to the role of a personal assistant to a superior officer.

In January 2020, leaked recordings of a telephone conversation between Abeysekara and actor-politician Ranjan Ramanayake went viral.

During the conversation, the voice alleged to be of Abeysekara criticises senior officers in the police and judiciary in response to questions asked by Ramanayake.

As the recording went viral, police accused Abeysekara of “bringing disrepute to the police service”. He was suspended from service.

“Abeysekara was not someone who took bribes or cheated. He faced political interference from this government and the last,” a human rights lawyer told Al Jazeera, requesting anonymity.

“Attempts to show he was biased and assassinating his character seems to be part of a bigger plan.”

The bail order favouring Abeysekara also came days after Sri Lanka was censured in a June 10 resolution adopted by the European Parliament, in which the bloc “noted with concern the detention of former CID Director Shani Abeysekara and urged the government to immediately give those detained a fair trial on valid charges or release them unconditionally”.

The resolution adopted by 628 of the 705 members of the assembly called for the EU Commission to consider the “temporary withdrawal” of Sri Lanka’s preferential access to European markets. Europe is Sri Lanka’s second-largest export market.

Abeysekara, meanwhile, is determined to clear his name. Two petitions against his arrest and detention have been filed in the Supreme Court, but any progress in the case has been slowed down by the coronavirus pandemic.

“As a Buddhist, I don’t hate anyone. I am not angry,” he told Al Jazeera.

“I worked true to my conscience. I treated my duties to enforce the law as sacred. But as a result, I was forced to stay away from home, away from my family, my children for no reason. That is something I regret.” (aljazeera)