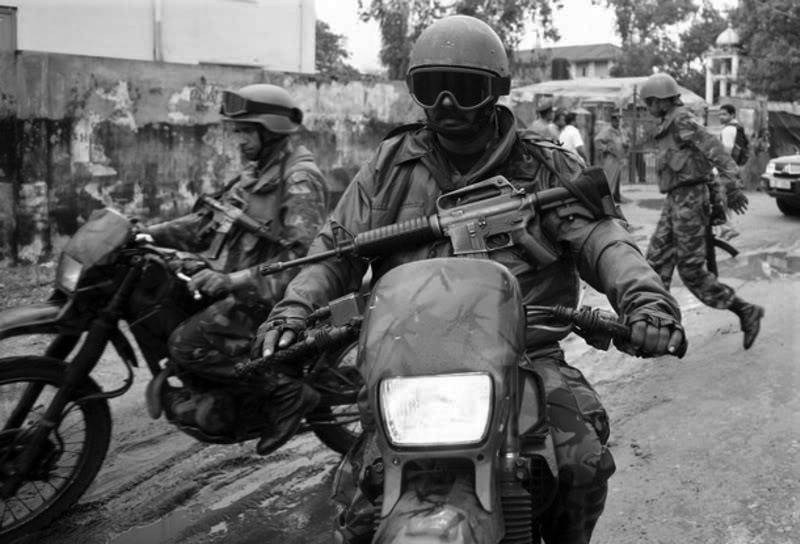 Sri Lanka’s covid-19 ‘dark riders’ and the urgent need to correct ourselves.

The fearsome sight of armed motorcycle riders, clad in black, complete with sunglasses and masks completely obscuring their faces conducting covid-19 temperature checks on the public in Colombo and then roaring away in a concerted cloud of darkness as it were, raises an unfortunate analogy to mind.

Symbolism is important in messaging

At the height of the terror-ridden years of Haiti’s Papa Doc Duvalier, his all-black masked Tonton Macoutes used to roam the capital city in much the same way, grabbing and ‘disappearing’ opponents of the regime. Interestingly, the Haitian Creole explanation of the name ‘Tonton Macoutes’ derived from our familiar ‘goni billa’ or as the Haitians rather hilariously put it, ‘uncle gunnysack.’ In both cases, these were scare tactics resorted to by annoyed parents to frighten children into obedience.

But Sri Lanka and Haiti share a further common and more sinister piece of history; these versions of ‘uncle gunnysack’ did not remain confined to storybooks but were used variously to deal with inconvenient critics. During the conflict years in the North and South of this country, the ‘goni billa’ was the way in which ‘insiders’ identified ‘terrorist suspects’ who were thereafter disposed of. Unsurprisingly, that less than foolproof method also caught up those who were entirely innocent in the process, Sinhala, Tamil, Muslim nonetheless. Guilt, innocence, these all became words to be casually tossed aside, not weighed with solemn precision in a court of law to determine a human being’s fate.

To be clear, my point in making this analogy is not to say that the Sri Lanka’s Army’s ‘quick reaction riders teams,’ as apparently these alarming looking groups are named, have been tasked with anything more forbidding than indeed, conducting temperature checks on members of the public . But what is important here is the symbolism. Is there any wonder that, faced with such a wall of forbidding if not frightening unfriendliness to put it mildly, covid-19 patients prefer not to declare themselves and seek medical help, with increasing numbers dying at home, as is now recorded?

Glib explanations do not suffice

A global pandemic cannot be handled in the same way as a war ought to be, as said umpteen times by Sri Lankan commentators across the length and breadth of opinion, liberal, conservative, the uncertain in-betweens and even the odd slavishly fawning Government types. And now, we have drones policing the areas designated as ‘isolated’ to catch the unwary skulking in the streets even as the message is passed to guntoting officers on the ground to take action. Yes, it is true that drones were employed in other cities, including Melbourne, to ensure that playgrounds and other public areas remained empty during that city’s strict lockdown recently.

In Sri Lanka however, the combination of several factors under a military-led effort including a retired military man sitting in the chair of the Ministry of Health, causes concern as we must surely acknowledge. This may accord with Prime Minister Mahinda Rajapaksa’s apparent if not extraordinary logic that military officers, once retired, become civilians but such glib explanations do not address the real issue of dearth of experience in the public health sector. Certainly military assistance in the face of national disasters is only natural but in a public health emergency in particular, the public face of the Government response must be senior public health professionals. They must not play second fiddle to others.

Indeed, following the departure of former Director General of Health Services, Anil Jasinha, the fact of the matter is that what we have are entirely unconvincing second fiddles at that. All this may be a tad too harsh on the good doctors who are coping with an unprecedented crisis but it is essential that experienced communicators handle public responses so that the public is reassured. It is of little use to parrot the same cautions over and over again or to insist that we are not ‘yet’ in the stage of ‘community transmission.’

Deterioration of public trust in the government response

The distinction between ‘covid clusters’ and ‘covid community transmission’ matters little if the spread is systematic, swift and over several Districts. It is also of little use to claim that the virus spread beyond Sri Lanka’s Western Province is not markedly high when, to put it simply, testing has simply not been done of communities in a widespread manner in these areas. Worryingly so, public trust in the public health system and Government responses lambasted as unconvincing has dwindled compared to what was manifested during the so-called ‘first wave’ of the pandemic as some like to call it to distinguish between the ongoing ‘second wave,’ though more percipient observers believe that the ‘first wave’ never quite went away.’

In March, Sri Lankans were reminded time and time again that the successful tackling of this global pandemic within our shores depended on collaboration with the public. Now as ‘dark riders’ test our temperatures on Colombo’s streets, with the risk that some more than ordinarily timid members of the public may develop fever upon being suddenly tested like this through sheer fright as it were, that collaboration is at its lowest ebb. That consequentially leads to secretive community spread, as evident. Indeed, even openly pro-Rajapaksa leading lights of the Government Medical Officers Association (GMOA) and monks in whose temples the Rajapaksas gathered to plan their return to power are heaping criticisms on the Government response and incidentally, on each other.

This would be vastly amusing if it was not alarming. Thus, we had the chief incumbent of the Abhayarama temple, Venerable Muruththettuwe Ananda Thero who also happens to, in an amusing quirk possible only in Sri Lanka perhaps, lead the public service united nurses union, declaring that the Government’s strong handling of the ‘first wave’ was not evidenced this time around. His complaint, put in condemnatory tones, is that the Government listens to only ‘yes men’ who are incompetent.

Is the public and the media only to blame?

So when President Gotabhaya Rajapaksa pronounces with force that the public and the media must take responsibility for the rising numbers of the covid-afflicted, that is only part of the truth. Certainly, the media has its own share of responsibility. The lack of professionalism on the part of the media, mainstream print and electronic included, has been striking. Media demonisation of covid-19 victims was another reason why the virus went into the nooks and crannies of crowded Sri Lankan community homes and lurked there, gathering its strength till it struck again with deadly accuracy.

Citizens meanwhile seem to have lost their initial fear of the virus and are more sangfroid this time around, violating pandemic restrictions regardless of the cost. Familiarity breeds contempt, it is said, and perhaps this is true of human behaviour in this context also but all this forms a toxically ‘perfect storm’ of Sri Lanka being ripe for covid contagion. But notwithstanding the failures of media and citizens alike, it is the Government alone which must take the responsibility for an ill-thought out militarisation of the public health response. That militarised approach to handling the global pandemic has now run into serious roadblocks. It must perforce change and do so with due speed.

Most importantly a legal regime to handle multifaceted aspects of dealing with a calamitous global pandemic which shows no sign of slowing down must be in place, not ad hoc regulations under an antiquated quarantine law. At least, as editorially pointed out in this newspaper last week, Sri Lanka’s 2005 Disaster Management Act must be properly employed for this purpose.

Absent all of this, as the President blames the media and the public, citizens cower in fear of ‘dark riders’ and people in authority point fingers at each other, only dysfunction prevails.