‘The Terminator’: how Gotabaya Rajapaksa’s ruthless streak led him to power 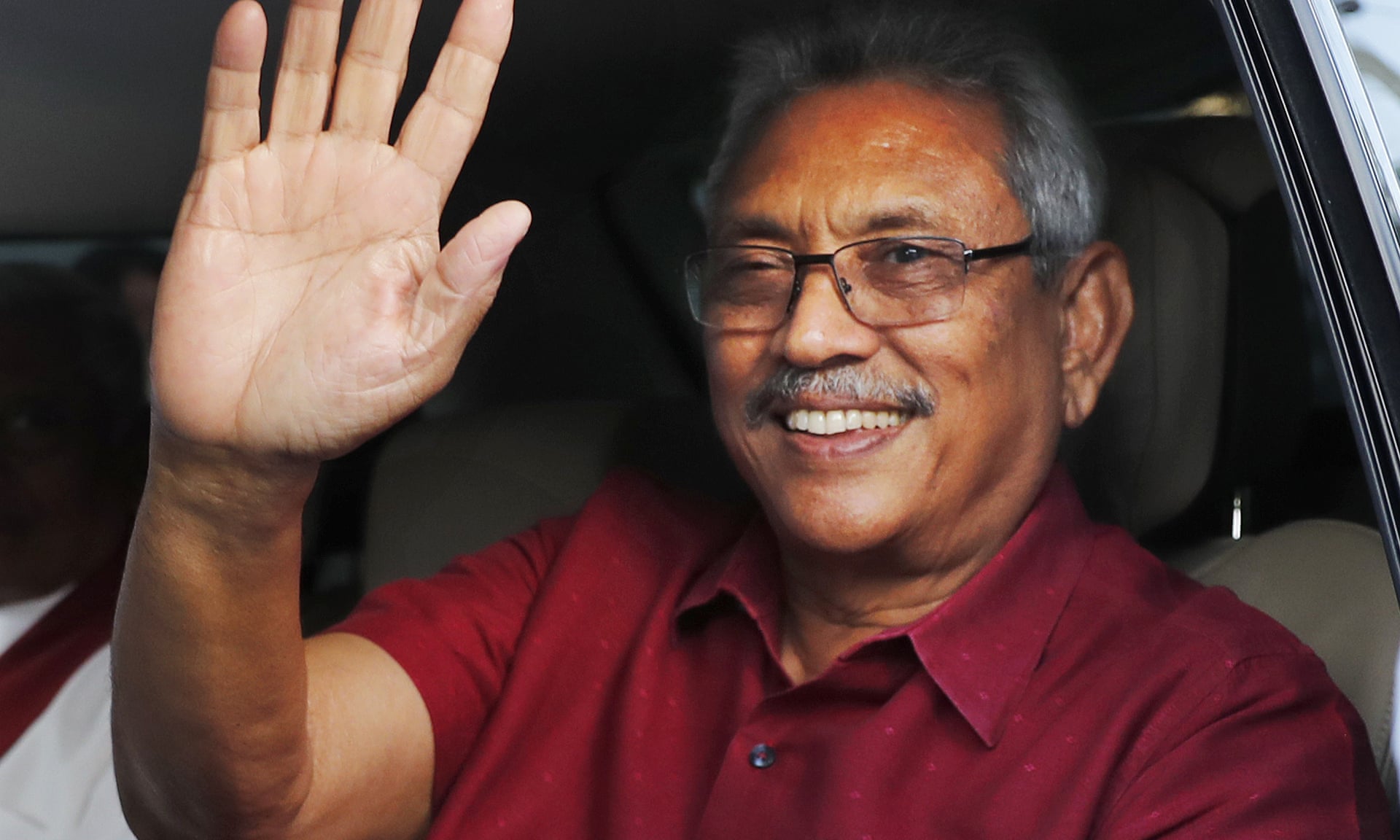 Image: Gotabaya Rajapaksa is one of the nine Rajapaksa brothers who have dominated Sri Lankan politics. Photograph: Eranga Jayawardena/AP.

Even his own family nickname him “The Terminator”.

Gotabaya Rajapaksa, the 70-year-old retired lieutenant colonel who will be Sri Lanka’s next president, has built his reputation on being efficient and ruthless, whether that was in his role in crushing the Tamil separatist movement, which kept Sri Lanka in civil war for 25 years, or through his urban development of the capital Colombo.

Born in 1949, Gotabaya Rajapaksa is one of the nine Rajapaksa brothers who have come to dominate Sri Lankan politics for more than a decade. Their father was also a politician, serving as an MP and cabinet minister.

Gotabaya joined the army in 1971 and throughout his 20-year military career fought in several major offensives in the Sri Lankan civil war. He rose to a senior rank before retiring in 1992.

He migrated to the US for more than a decade but returned in 2005 to assist his brother Mahinda’s presidential campaign. On Mahinda’s election as president, Gotabaya was appointed his minister of defence.
For the next four years, Mahinda and Gotabaya oversaw the brutal and bloody operation that ended the civil war but during which 40,000 are estimated to have died. It was during this time, as de facto head of the military, that Gotabaya allegedly authorised torture, rape, extrajudicial killings, abductions and disappearances of Tamil separatists, journalists and opponents, by his own government-endorsed “death squads”. Gotabaya has denied all the charges.

There has never been any accountability for the tens of thousands of disappearances that occurred in the final throes of the war.

One particular case that has haunted Gotabaya is the murder of newspaper editor Lasantha Wickrematunge, who was killed by a death squad said to be acting on Gotabaya’s orders.

In 2017, testimony by a former army commander alleged Gotabaya had his own secret unit used specifically to target journalists and dissidents, while Sri Lanka’s Criminal Investigations Department (CID) said Wickrematunge’s autopsy had been falsified to conceal that he had been stabbed to death.

In the US, where Gotabaya became a citizen, Wickrematunge’s daughter has filed multiple charges, accusing him of torture, extrajudicial killing and crimes against humanity.

Gotabaya is also accused of indulging in large-scale fraud during his time in power, including allegedly taking huge kickbacks from defence deals. In Sri Lanka, he still faces charges of corruption relating to alleged misappropriation of 33.9m rupees (£146,000) of state funds to build a memorial museum for his parents in his hometown of Medamulana.

Although Mahinda is still the more popular Rajapaksa brother, a law introduced by the government prevented him from running again so Gotabaya was put forward instead. Many in Mahinda’s camp were reportedly initially resistant to the idea, fearful of Gotabaya’s militaristic and authoritarian leanings, and his volatile temper, which has led him to explode in anger during media appearances in recent years.