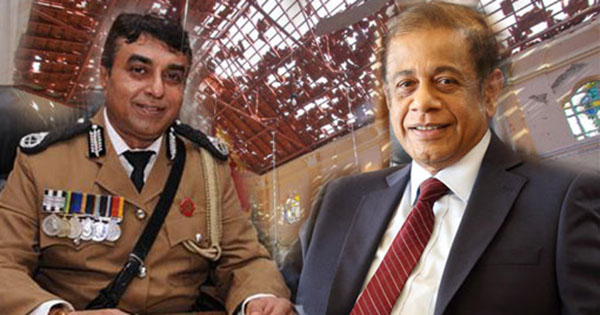 There is palpable confusion in the air. Is Sri Lanka’s Inspector General of Police (IGP) Pujitha Jayasundara, arrested this week along with former Defence Secretary Hemasiri Fernando on a range of offences under the Penal Code, including murder and causing death by negligence, still holding the position of head of the police force, albeit being put on compulsory leave? The arrests of these two men are grounded in their failure to respond to previous warnings by foreign and local intelligence sources regarding planned attacks by Islamist jihadists on churches and hotels on Easter Sunday.

A political charade that mocks the public

So a Government which is at sixes and sevens as a result of a squabbling President and Prime Minister as well as an Opposition which is greedily salivating to grab power at the upcoming elections still cannot muster the combined political will to put the mandated parliamentary procedure under the Removal of Officers (Procedure) Act (2002) into action in order to deal with an IGP who refuses to leave his position? And providing the icing on this very strange cake, that very same IGP has now been arrested. Are we living in a Kafka-like nightmare that such blatant Rule of Law contradictions have become a normal feature of the political landscape, tolerated with a sigh and a shrug?

For those unfamiliar with the provisions of the 2002 law, this details a clear procedure for removal of the IGP in a push to depoliticise public appointments and removals. The process may commence if it is found, inter alia, that the IGP is culpable of a gross neglect of duty. Thereafter, removal is by the President following a parliamentary process akin to the removal of superior court judges. But the fact that, for several months, this law has not been moved against the IGP, up to the point of his arrest and now beyond it, speaks to a political charade that only mocks our collective sense.

To add to this idiocy, the Criminal Investigation Department has now commenced investigations into a 2017 incident captured on video where the IGP assaulted a constable who was working as a lift operator at the Police Headquarters. This incident led to public outrage with calls being for immediate action to be taken against him but to no avail. Now this amnesia has dissipated and a two year old incident is being ‘investigated.’ When will this witless charade end?

All this is not to say that the IGP and the Defence Secretary should not be brought before the law for failure to act in regard to the Easter Sunday attacks. But what is happening now is a clear indication of how the law should not operate. Meanwhile, the somewhat peculiar reference reportedly by the Attorney General that these failures of these two officers amount to ‘grave crimes against humanity under international law’ has resulted in the raising of incredulous eyebrows in some quarters.

The concept of ‘grave crimes against humanity’ is a well-established legal norm, the ingredients of which go far beyond the elements that are required to make up the offence of criminal negligence or murder or indeed any of the other crimes that come within the framework of Sri Lanka’s penal system. On the contrary, this is a defined crime over which the International Criminal Court has authority to prosecute, subject to the precedent conditions of its jurisdiction being satisfied. Essentially, the term ‘crimes against humanity’ encompass fifteen serious violations, that are ‘committed as part of a large-scale attack against any civilian population.’

As detailed in the Rome Statute, these include offences such as murder, rape, sexual slavery, torture, imprisonment, enforced disappearances, enslavement – particularly of women and children, apartheid and deportation. That being said, the Attorney General’s reported reference to the same in the context of the action taken under the criminal law in reference to the IGP and the former Defence Secretary would no doubt be likened to a verbal flourish as it were, given that the actual offences for which indictment has been issued are confined to narrowly defined crimes encompassed within our own criminal law.

Then again, the applicability of the crime of culpable omission as referenced not only to these two officers but also to intelligence heads who should have immediately acted upon receiving intelligence input of the planned attacks, raises several interesting questions. The crime of omission has surfaced in the past in some notable cases. One such instance was the Bindunuwewa case where a Commission report held two senior police officers liable for not taking action to prevent villagers attacking detainees at the Bindunuwewa Rehabilitation Centre housing former LTTE rebels.

The rioting took place during a tense situation in late October 2000 following the detainees protesting regarding their long detention without any charges being filed against them. Twenty seven detainees were killed while fourteen others were injured. The High Court ruled the accused police officers were criminally responsible on the basis of illegal omissions. A Divisional Bench of the Supreme Court later overturned these convictions, holding that the accused police officers must have been found to have ‘intentionally’ done nothing for the charges to have been proved.

The judicial view was that “if the officer in charge has exercised his discretion bona fide and to the best of his ability, he cannot be faulted for the action he has taken even though it may appear that another course of action could have proved more effective in the circumstances.” Viewed from a critical standpoint, such judicial lattitude gives unreasonably wide discretion to individual officers to decide whether to act or not in the context of an emergency situation. Undoubtedly these are questions that will arise in the instant cases of culpability in the Easter Sunday attacks as well.

Familiar patterns of selective application of the law

But as deplorable as the failure to act on the part of the IGP and the former Defence Secretary was, this was only part of a larger and mammoth failure of intelligence heads and political leaders. The cumulative result was the murder of innocents while hundreds remain critically injured to this day.

In the final result, it is President Maithripala Sirisena and Prime Minister Ranil Wickremesinghe who needs to accept political responsibility for this infamy. Scapegoating a few officers will not suffice to shift responsibility at the chain of command.

Above image courtesy of media.lk