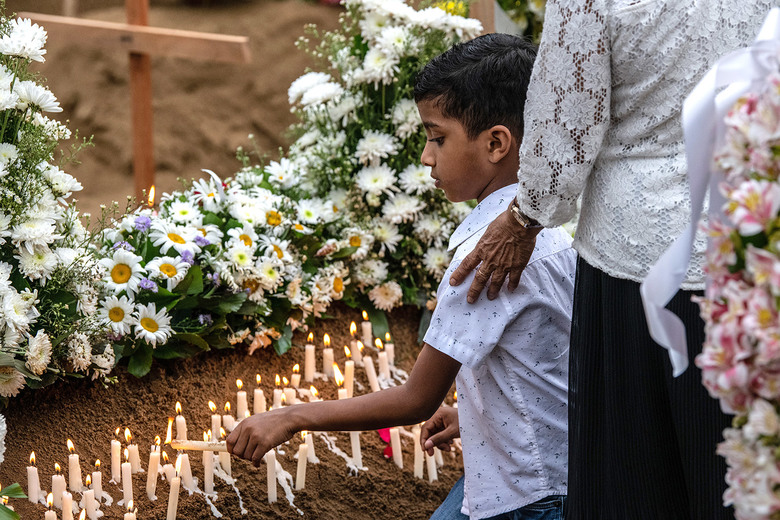 Image: A young boy lights a candle at a grave after a funeral for a person killed in the Easter Sunday attack on St. Sebastian’s Church, on Thursday in Negombo, Sri Lanka. Carl Court/Getty Images.

In a country with tight government controls on traditional media, social media is a double-edged but necessary sword.

COLOMBO, Sri Lanka—Today has been a bizarre day. In an ideal world, I should be working on a project-funding proposal and trying to finish a short story about a near-future police force. Instead, I’m pacing the office. I just finished speaking with a journalist from a prominent media organization about the block on social media imposed in Sri Lanka in the aftermath of the devastating recent terrorist attacks, its effects, and the information flows in this country. I’ve been digging into social media and politics for a while, so people think I have answers.

Now, the journalist is waiting for an Uber to take him to what is effectively a high-security zone. He doesn’t have his press pass. He is a foreign national, a brown man carrying two cameras and an enormous backpack. The latter is the hallmark of a suicide bomber right now. If the police detain him, he’s finished. If the neighbors see his backpack coming out of our office, we’re finished.
The Uber driver, thankfully, is a Muslim. Right now, he understands more than anyone else what it is like to be suspect. We have a small chat. He reminds me of a guy I used to work for, back when I was selling keyboards and mice at a mall retail store. Every other month someone would start a thread on a popular local internet forum, railing at the store for being Muslim-owned. The people who jumped into the cesspool of hate included a semifamous ex-con who was fond of making death threats. My boss would scroll up and down anxiously, but his store stayed open regardless. The driver, likewise, intends to roll on. This is, I assure the journalist, a bad time to be in Colombo, but it’ll get better. It always does.

To understand Colombo, one needs to first grok how small it is—not just in terms of size, but in terms of community, Colombo is one of those places where everybody knows everybody else. Forget Facebook’s 3½ degrees of separation. It’s near-impossible to meet someone without finding out immediately after that they’re somehow connected to your father, mother, sister, brother, cousin, batchmate, colleague, frenemy. Whereas other cities seem to offer casual anonymity, Colombo takes it away.

So take this tightly bound community. Rip out a few hundred people. Hospitalize a couple of hundred more. What you get is a wounded, panicked, screaming beast.

The first news of the wounds came to us through social media. Bhanuka Harischandra, a friend of mine and a successful startup founder, put up an Instagram post of the outside of the Shangri-La Hotel with a caption about seeing bodies tossed out by a blast. He was there to meet a potential business partner. His next post was from the Cinnamon Grand—where the suicide bomber stood in the buffet line, according to reports—with bits of ash and shrapnel in his T-shirt. Then came a flurry of tweets asking what had happened to Kingsbury, another luxury hotel. And a church in Batticaloa. And St. Sebastian’s. Then another church. Photos were shared through Facebook.

Only then did news of the attacks break on television.

Media in Sri Lanka is tightly controlled by a very few people and often riddled with political bias. It is customary in Sri Lankan politics to steamroll, impugn, and commit character assassination on those who do not join you in victory; journalists have traditionally been forced to be instruments. Media might be freer now, but these bruises still remain, entrenched by political power.
In a country with such tight government controls on traditional media, social media is more of a boon than Western commentators would assume. In October, the current president of Sri Lanka decided to violate the Constitution, instigate a coup, and appoint the former president, Mahinda Rajapaksa, as prime minister—while an elected prime minister sat in office.

Within minutes, Sri Lanka effectively had two governments and two prime ministers. Parliamentarians were crossing over to opposing parties, and some lesser minister’s bodyguard had fired into a mob. The videos of all of these reached us a full 15 minutes before the news anchors started their spiels, their political affiliations obvious. Without social media, we would not have known what was going on during that volatile political situation.

And this week, as chaos reigns, people in the West are celebrating the decision to block access to social networks. As of Thursday, the block is still in place. A state of emergency has been declared, and we have no idea what time curfew will be tomorrow, let alone the fate of the Facebook block. Official information sources are increasingly starting to resemble hoaxes themselves.

In this zeitgeist, the few journalists who engage with the Colombo community, such as Azzam Ameen, a reporter with BBC Sinhala and a journalist with a fast thumb, are go-to sources. The text from Ameen’s Twitter and Facebook pages is copied and shared in WhatsApp groups—family and friends, entire school batches (or classes) from many decades ago. The block—which is not a ban on people accessing social networks so much as an easily circumventable order for internet service providers to block the websites and apps—is making it harder for many to access Ameen’s information. But it isn’t stopping rumors from flourishing. I should know, since I’ve spent a great deal of my time trying to help people verify information.