The sex worker who triggered a campaign to abolish brothels in Geneva: Anna S 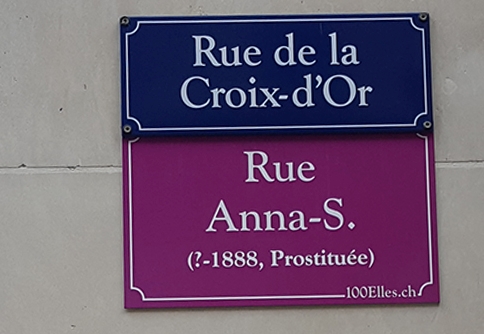 Image: In a campaign to balance the number of streets bearing the names of men and women, a Geneva based feminist collective L’Escouade has put up the street name in the memory of Anna S, a sex worker lived in 19th century.

Probably born around 1865 in Berlin and died on June 25, 1888 in Geneva, Anna S., also called Anna Scherff in some sources, was a prostitute who committed suicide by jumping from the window or the roof of the brothel where she lived. The life of the one of whom we know only a few rare biographical elements is tragic, but she bears a strong testimony. 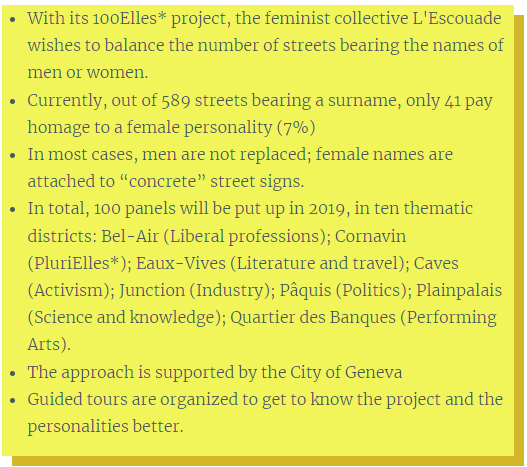 Anna S.’s life is known to us only through police reports. A short chapter is devoted to him in the work of Alberto Cairoli, Giovanni Chiaberto and Sabina Engel, entitled The Decline of Brothels. Prostitution in Geneva at the end of the 19th century. It is mainly this text that we summarize here. Anna S. is said to be from Berlin and she was “sold” by her mother at 14, according to testimonies from the time. She would have passed through Frankfurt, Lyon, then Geneva. Anna S. was a “boarder” with Madame Adèle, owner of a brothel in the rue de la Croix-d’Or. According to the system in force in the world of prostitution, she was indebted to this house. It is known that she owed 2,000 Swiss francs to her pimp at the time of her death. The practices of this house are particularly well known, because an account book has been kept for the year 1876: the debt was based on the costs of “acquiring” the wife, rent, board, medical checks and even clothes.

On June 25, 1888, the report of the security officer is relatively detailed: “we find that a woman is lying in Madame Adèle’s courtyard with her face up and her head bathed in a pool of blood”. He asserts, after having conducted several interrogations, that Anna S. had spent the afternoon with her colleagues on the terrace, that she was cheerful, but that “without cause” she was singing, laughing or crying. To explain the suicide, he speaks of “a fit of madness which suddenly came upon him”. A police investigation is therefore carried out. An autopsy is also performed.

This brothel was, like others at this time, watched by the police, all the more so as public opinion was particularly aware of the problem. This is reflected in the few lines that the Journal de Genève devotes to the subject. Philanthropists and activists then demand the abolition of brothels. In 1875, Josephine Butler founded the International Abolitionist Federation in Geneva. A conference was held in Lausanne in 1887 and another in Geneva in 1889. The book The decline of brothelsclaims that Anna S.’s suicide was an important trigger in the fight against brothels in the township. Around June 25, 1888, an upsurge in the “number of pamphlets, interventions at the Grand Council, articles and regulations” is noted. The circles fighting against the economic exploitation of prostitutes have in particular relied on the destiny of Anna S. to show that the women of the “brothels” are victims of sequestration in several forms, in particular by indebtedness. A few days before the death of Anna S., another prostitute had tried to commit suicide by jumping from a window. An activist had then published a brochure with the shocking title When the door is open, we do not go through the window .