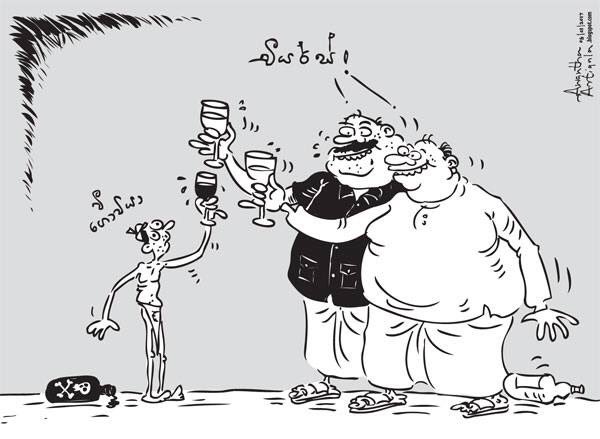 “…to yourself a thing shameful but bringing joy to the enemy.” (The Iliad)

On January 8th 2015, Lankans voted not only to elect a new president but also to transform governance. The mandate Maithripala Sirisena received two years ago was not a personal one; he was the symbol of the political culture he promised to build, one which was more accountable to the people, less self-indulgent, more democratic.

The transformational change President Sirisena was expected to work towards was fourfold – resuscitation of democracy, a more even-handed economy, a governance less corrupt and more law-abiding and reconciliation (inclusive of justice and a political settlement). From South to North, people wanted an end not just to the Rajapaksas but also to the Rajapaksa way of doing things and being in the world.

In its first year the new administration lived up to this promise. There were negatives, particularly the Central Bank bond issue, but the positives were more numerous and weighty. On January 8th 2016, it was possible to look at the past year with a degree of satisfaction and look towards the coming year with a degree of hope.

2016 turned that hope to a delusion. The passing of the long-awaited Right to Information Bill and the replacement of Arjun Mahendran with Indrajith Coomaraswamy as the Governor of the Central Bank were the two sole major-positives in a year lacerated by avoidable errors and unnecessary misdeeds.

“There are times – they mark the danger point for a political system – when politicians can no longer communicate, when they stop understanding the people they are supposed to be representing,”[i] commented Ian Kershew on the state of the Weimer Republic before its ignominious downfall. In its second year, the Sirisena-Wickremesinghe government moved in the direction of a like condition. When a president – whose brother is a premier rice-miller in the country – maintains a baffling silence about skyrocketing rice prices, when a prime minister tries to create a ministerial-post which is untouchable by the law, when a parliament is more concerned about female attire than about the warnings of a severe drought, the omens are not propitious.

That the Sirisena-Wickremesinghe administration inherited a misgoverned land deeply in debt is unarguable. What is incomprehensible is the administration’s growing proclivity to exacerbate inherited problems and create new ones.

Independent Lanka’s only real and successful campaign of nationwide mass-disobedience happened over the issue of rice, the Hartal of 1953 which brought the government of Dudley Senanayake to its knees. The United Front government’s arbitrary rules regarding the consumption and transportation of rice played a key role in its epic downfall of 1977.  The importance of rice (price and availability) in the scheme of political things can be ignored only by a government which is obtuse to the point of self-harm.

This official indifference – shared by both the green and the blue components of the administration – is symbolic of a larger malaise, a stupefying disregard for public opinion. Just two years on, the government is ensconced in an echo-chamber, which shuts out all dissonant notes. In 2016, it not only failed to tread the path it promised to but also embarked on a path it pledged never to take. As a result, it lost the momentum and the moral-high ground, antagonised allies without winning over enemies and narrowed to an alarming degree the critical difference between itself and Rajapaksa rule.

The Pivot to China and Other Inexplicables

2016 was darkened by the Sirisena-Wickremesinghe administration’s willingness to emulate some of the worse Rajapaksa errors. The best case in point is a plan formulated by the UNP-half of the government – and specifically by the unelected minister Malik Samarawickrama – to handover the Hambantota port and 15,000-acre-exclusive-industrial-zone to China on a long lease. If that imprudent plan succeeds, Sri Lanka will be saddled with its own version of Guantanamo.  And we the people will find ourselves in the politico-economic-military crosshairs of other countries’ battles.

As the fate of the Hambantota deal hangs in balance, it is instructive to remember that American marines first entered Guantanamo to assist Cuba in its struggle for independence against Colonial Spain. Once Spanish imperialists were driven out, Americans, instead of leaving, passed the Platt Amendment, giving Guantanamo to itself. Cubans tried to resist and failed and the lease agreement was signed in 1903.

It was a logical move for Washington. The importance of sea power in turning America into the next global supremo had been argued forcefully by one of the prime architects of an imperial-expansionist policy, Captain AT Mahan, especially in his influential book, The Influence of Sea Power in History. Grabbing Guantanamo made sense to the US; placing its imprint in its immediate region was a necessary prelude to marking its presence globally.

China, the next rising power, too understands the vital importance of the sea to the realisation of the ‘Chinese Dream’. This is clearly stated in the first public military strategy white paper released by the Chinese Ministry of National Defence on May, 2015, “The traditional mentality that land outweighs seas must be abandoned, and great importance has to be attached to managing the seas and oceans and protecting maritime rights and interests. It is necessary for China to develop a modern maritime military structure commensurate with its national security and development interests…so as to provide strategic support for building itself into maritime power.”[ii] Hambantota’s place in this grand plan, given its strategically proximate location to India, is not hard to surmise

Cuba in 1903 couldn’t withstand America. The Sirisena-Wickremesinghe administration has no such excuse. And this re-embracing of China couldn’t have happened at a worse global time. The Zeitgeist is one of political illiberalism, religious fundamentalism and ethnic-nationalism, but it doesn’t mean that all political leaders who embrace these atavistic positions will embrace each other in fraternal alliances. The incoming US president is already engaged in a twitter-conflict with China. Once Mr. Trump is sworn in, relations between the waning and rising global powers are likely to deteriorate still further. China’s recent vetoing of an Indian proposal to have the UN declare Masood Azhar, the mastermind of the 2016 attack on Pathankot airbase, a terrorist indicates that even on the issue of combating terrorism, the two regional powers can develop contradictions.

Tethering Sri Lanka to China, to the detriment of the country’s relations with both the US and India, seemed an inanity peculiar to the Rajapaksas. The current administration’s sudden move not just to emulate but also surpass the Rajapaksas in this regard is one more sign of a radical loss of self-interest.

According to the government, the industrial zone is being created to make the Hambantota port economically viable. China will relocate factories here, to produce export-goods at lower costs. That raises two questions – the impact on an already vulnerable environment (characterised by severe water-shortages and human-elephant conflicts); and the kind of employment which would be created in these factories. The Chinese record on environment and labour practices in the Third World are abysmal. If the same approaches are adopted here, the new factories will devastate environment, create jobs which very few Lankans would want and generate Rathupaswala-type situations.

A recent event in Padukka provides a timely warning. Halbarawa village is affected by a nearby quarry supplying stones to the Colombo Port City. The villagers complained to the authorities about the damage to their houses and the compromising of their environment, with no results. On 18th December 2016, the villagers entered the quarry, attacked the workers (including one Chinese national.)[iii] Such explosive incidents would become commonplace in the deep-South, if this imprudent plan to hand over 15,000 acres to China on a 99 year lease goes ahead.

A different vision of Sri Lanka was one of the key factors which animated the 2015 presidential contest. In 2016 the government displayed a distressing lack of interest in promoting the idea of a country which is open, tolerant and treats all her people as equal citizens. Though official racism remains in abeyance, key members of the government flirt with racists, sending a worrying message to minorities, without whose backing President Sirisena would have lost in January 2015. The verdict in the Raviraj murder case by an exclusively Sinhala-speaking jury not only dealt a blow to the idea of a non-partisan judiciary; it also killed the hope that justice for the past wrongs would be possible through an exclusively national mechanism.

The promised constitution (inclusive of a political settlement to the ethnic problem) seems unlikely, not least because the government’s economic inanities would adversely impact on its chances of winning a referendum. In its second year, the administration also displayed a distressing lack of courage and a disappointing inability to stand up to extremism and extremists, the two most obvious examples being the public hobnobbing with Bhikku Galagoda-Atte Gnanasara and the indifference to the need to reform the Muslim Marriage and Divorce Act (MMDA) – at least to the extent of following the example of Muslim-majority countries such as Algeria, Bangladesh, Iraq, Morocco, Jordon, Malaysia (18 for females) and Tunisia (20) and banning child marriages.

Former President Mahinda Rajapaksa greeted 2017 by proclaiming his intention to oust the government within the year. The strategy would be an obvious one – exacerbate the natural differences between the UNP and the SLFP halves of the government until they turn into antagonistic contradictions, isolate President Maithripala Sirisena within the SLFP, edge Ranil Wickremesinghe out via a change in the parliamentary balance and form a new government under the premiership of Mahinda Rajapaksa. A nationwide campaign of fear-mongering about the imminent end of an independent, single Sri Lanka is already on, and would provide the soundtrack for the planned political changes.

The president and the prime minister on occasion indulge in the delusion that each can survive without the other. The truth of the matter is that neither can survive alone. If the president withdraws his support, the premier can be unseated; if the premier withdraws his support, the president can be impeached. President Sirisena will not be president for a long, if Mahinda Rajapaksa becomes the PM. Premier Wickremesinghe will find himself back in the opposition – possibly after a short stint as the acting president – if Maithripala Sirisena is impeached. The only way one can survive is if the other survives.

But neither will survive, if they fail to acknowledge and alleviate the growing public discontent. If disillusion becomes generalised and a majority of the populace loses confidence in the government, the SLFP parliamentarians currently supporting Maithripala Sirisena are more likely to shift back to Mahinda Rajapaksa. It doesn’t need a crystal ball to predict that they will be joined by some UNP parliamentarians, especially those disaffected by Ranil Wickremesinghe’s leadership.

Two years after the presidential election of Jan 2015, the political battle lines remain unchanged. There is no alternative to Rajapaksa rule other than the current administration. There is no alternative to the current administration other than Rajapaksa rule. The one crucial change, which might decide the coming electoral battles, is that those forces which enabled the defeat of the Rajapaksas are fractured, disillusioned and demoralised.

President Sirisena has failed to recreate the SLFP as a modern democratic party, immune to the siren song of the Rajapaksas. Premier Wickremesinghe seems to be succumbing to the hubris which brought the administration of JR Jayewardene to grief. If Mahinda Rajapaksa’s New Year wish comes true, it will happen not because of his virtues, but because of the weaknesses and failures of his two main opponents.