The Rajapaksas’ hold on power should not undermine democratic gains since 2015 – Editorial, The Hindu 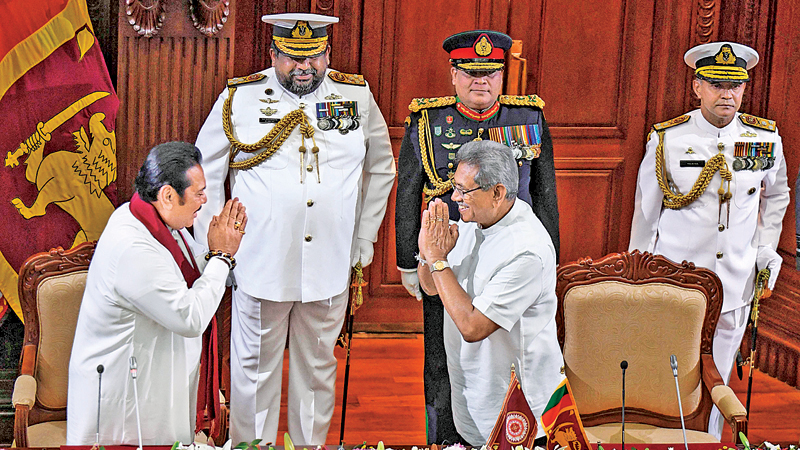 The appointment of Mahinda Rajapaksa as Sri Lanka’s Prime Minister consolidates the hold of the Rajapaksa family on power. The change was entirely on expected lines, after his younger brother, Gotabaya Rajapaksa, won decisively in the presidential election. Outgoing Prime Minister Ranil Wickremesinghe, whose party’s candidate lost the election, submitted his resignation, thus enabling the newly-elected President to appoint a new Prime Minister. Under the country’s constitutional scheme, the President is directly elected, and heads the Cabinet, even while the Prime Minister he appoints ought to be one who commands a majority in Parliament. Even though the Sri Lanka Podujana Peramuna, the party of the Rajapaksas, does not have the requisite numbers, it is unlikely to be an issue, as it is expected to be only a caretaker regime until the next parliamentary elections, due in late 2020. Under the 19th Amendment to the Constitution introduced in 2015, the President may dissolve the House six months prior to the end of its term, which effectively means it could be dissolved any time after March. Mahinda Rajapaksa has emerged as Sri Lanka’s most popular leader today. Few will doubt that his acumen and personal charisma were crucial to his brother’s victory. His presence in an official role in the corridors of power will be vital in the way the President runs the country and handles external relations.

However, the prospect of the country’s two most powerful offices being vested in a single family does raise concerns. The 2015 mandate against Mahinda Rajapaksa was one for reform and change. It led to the 19th amendment, which curbed the President’s powers, especially the power to dismiss the Prime Minister and his Cabinet at will, and the two-term limit on contesting for President. The question now is whether the gains it brought about for democracy will last. Mahinda Rajapaksa’s reaction to the election result contained a specific reference to the “complications” in governance caused by the amendment, and promised a “programme of action”. It would be a retrograde step, if they embark on any move to overturn the gains of the legislation. A return to ancien régime was undoubtedly one of the concerns of the minorities when they voted against Gotabaya Rajapaksa. India’s move in sending External Affairs Minister S. Jaishankar to call on the new President has signalled an eagerness to preserve its traditional ties with Sri Lanka as well as its interests. It is particularly welcome that India has conveyed its expectations that the process of national reconciliation would be taken forward by the new regime, with a solution for the Tamil population based on equality, justice, peace and dignity at the core of it.

The Hindu  Editorial: To the power of two: On the Rajapaksas

Above photo from the Daily News.