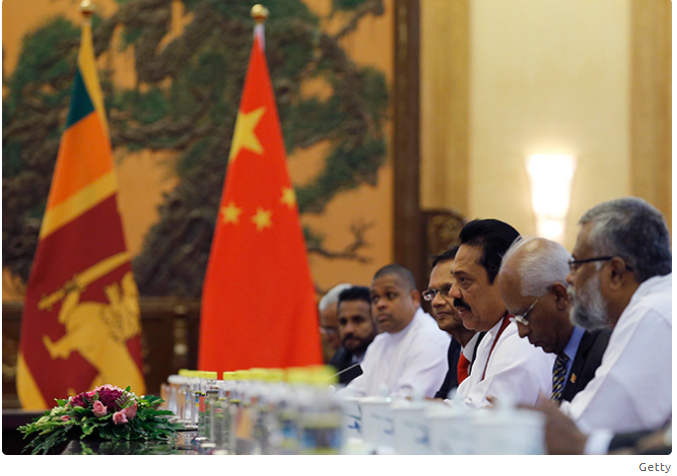 The current Sri Lankan regime has further moved away from democratic norms. There is a ‘triumvirate’ of power centres amongst the three Rajapaksa brothers— Basil, Gotabaya, and Mahinda Rajapaksa.

For the first time in Sri Lankan history, the country’s finance, economic policies, and defence ministries are led by three brothers. The ruling family is further extended to include five other members; with a total of eight family members serving as ministers, it is the largest political ministerial dynasty in the world.

Family politics in South Asia is not a new trait but never seen on this scale at any one given political moment. The new appointment of Basil Rajapaksa as the Finance Minister would further consolidate power amongst the Rajapaksa family members, further departing from the democratic norms and seeking alternative political models to justify their existence.

Apart from the existing autocratic nature of the government, there is yet another danger. The government has opened a floodgate and has allowed autocratic quintessence to flow into its political system. Other autocratic nations, especially China, can use the fertile ground prepared by the Rajapaksa brothers to advance their agenda.

The new appointment of Basil Rajapaksa as the Finance Minister would further consolidate power amongst the Rajapaksa family members, further departing from the democratic norms and seeking alternative political models to justify their existence.

CCP centenary, the great firewall and its survival

Surrounded by a 70,000 member audience, President Xi sent a clear warning in his centenary speech in Beijing that “Chinese people would no longer allow any alien powers to bully and oppress and anyone who tried to do so would be badly battered by the Chinese nation’s perseverance…No one should underestimate the Chinese nation’s will and power to fight against foreign power”.

China will fight in multiple geographies, including land, sea, cyber, and space. The warning comes when China is propelling its ambition to be a great power with its own characteristics.

The new world order that China wishes to create has its own Chinese flavour backed by the Chinese Communist Party (CCP). The belligerence at the South China Sea, the human rights concerns in Hong Kong, Xinjiang, and the infrastructure loans in Sri Lanka to cyberspace and 5G technology are coated with these “Chinese characteristics”.

The world order that China envisions is through the CCP political ideology. Its stance at the UN Human Rights Council makes it evident that China deems economic rights to be way more critical than individual civil liberty.

The new world order that China wishes to create has its own Chinese flavour backed by the Chinese Communist Party (CCP).

The CCP celebration is about the political values and its ideology, despite keeping the window open for reform. As Chinese reformist Deng Xiaoping said, “if you open the window for fresh air, you have to expect some flies and mosquitoes to blow in”.

To keep such “flies” —the political dissent and liberal ideology—away, CCP has used multiple mechanisms. One such tactic was unleashed by the Ministry of Public Security that initiated the firewall Golden Shield Project in 2000. While the internet is a tool in China’s economic development, its existence also undermines political stability since the internet encourages diversity of ideas, propels information, and is a tool for democratising a society. The great firewall, thus, effectively carried out CCP’s efforts in suppressing liberal ideology.

With a quarter of the human population living in China, CCP—the second oldest one-party authoritarian rule—has managed to sustain the communist system for seven decades.

According to Rana Mitter, there are two reasons why the Marxist Communist system have survived for so long in China. First, the CCP continues to be ruthless. The Leninist strand of absolute use of coercion continuess to be a necessary character to sustain the CCP model.

Second, it practices flexibility—a trait uncharacteristic of authoritarian regimes. China’s willingness to change from the Soviet model during Mao’s time to open up economically during Deng’s time is evident. It is as if the Communist party has implemented a capitalist revolution to succeed with Chinese characteristics.

China’s willingness to change from the Soviet model during Mao’s time to open up economically during Deng’s time is evident.

The CCP’s Leninist model will navigate easily in nations that have suppressed liberal democratic values. In this case, the external support will flow from China to sustain the autocratic government in Sri Lanka.

The Rajapaksa triumvirate have already endorsed China and its CCP model of development. China would assist and use the Rajapaksa brothers to push the Chinese development and strategic agenda through its Belt and Road Initiative (BRI). However, the efforts will not be limited to BRI. The Rajapaksas’ power consolidation in Sri Lanka will have a long-term impact on the country’s democracy.

At first glance, the CCP political ideology with Leninist characteristics may not interest a democratic nation such as Sri Lanka and the promotion of the Chinese Communist model in nations along the BRI track will seem as an impossible task; however, that might not be the case in the long run.

Currently, Sri Lanka might be predisposed towards a democratic model; however, it may change over time due to structural reforms to the nation’s foundational factors such as the Constitution and administrative policy preferences to import autocratic values and norms from the CCP model, justifying as an alternative to the existing one, claiming more efficiency for economic development. China will push the CCP agenda, camouflaging it with a promise of an economic miracle to many nations, including Sri Lanka.

China will push the CCP agenda, camouflaging it with a promise of an economic miracle to many nations, including Sri Lanka.

Prime Minister Mahinda Rajapaksa praised CCP’s role saying, “China has successfully eradicated poverty of 900 million people under its open economic policy… I am confident that China will bring back the economic strength that Asia had 500years ago through this Silk Road. China always believed that improving infrastructure will provide new ways and new strengths for the people. Therefore, we have constantly invited China to help develop the infrastructure of our country” said Rajapaksa on the 6th July CCP and World Political Future summit.

Further, he expressed his gratitude to China for the development and generous donations of the Sinopharm vaccine, saying, “it is further admirable that China has approved for the production of the Sinopharm vaccine in countries like ours. During a global pandemic such as this, decisions initiated by the CCP will be respected as those taken for the benefit of humanity”.

The Prime Minister’s China praise shows clear signs of China dependency to ensure the regime’s survival. The regime’s decision to secure Port City Bill and large-scale Chinese infrastructure, even if it has negligible returns, is due to Prime Minister Rajapaksa’s informal relationship with China.

According to Jonathan E. Hillman, who rightly observed in his book, “The Emperor’s new Road”, “If Chinese loans were cigarettes, Sri Lanka’s Hambanthota Port would be the cancerous lung on the warning label.”

Sri Lankan leaders have raised the BRI spirits, ignoring economic returns, depending on the Chinese infrastructure development outcomes with high political expectation in order to sustain power. With economic woes and the rising cost of living, the public will have difficulty digesting the large-scale development projects with no returns as it requires a considerable time more than the regime’s timespan to generate profit and jobs such as the Colombo Port City.

The Sri Lankan government completely ignored the strategic dimension of China. Like in Europe, where China has built a ‘Balkan Backdoor’ to enter the European Union through the Balkan states, China will enter South Asia from autocratic states such as Sri Lanka.

The ‘Sri Lankan Backdoor’ that China has created for its strategic expanse is not visible to government policymakers who remain blind by the Chinese economic miracle and is accepted for their own political survival.

CCP’s symbolic significance was amplified by the Sri Lankan government by issuing a special coin to commemorate the CCP centenary. The coins, which were perhaps minted in the Middle Kingdom and sent to Sri Lanka, was a clear sign of Rajapaksa regime’s China dependency.

The public displeasure is evident on social media, critical of Sri Lanka’s heavy China dependency and its inability for debt repayment. One such post was from a local aviation engineer who posted, “It is not even to honour a foreign country but a dictatorial, single party that rules the country. Is this what is in store for Sri Lanka?”. While CCP pushes its model, the Sri Lankan public will reflect on the danger of losing its prized democratic values and view it as a threat to their civil liberties.

For the first time, Sri Lanka’s usual practice of issuing commemorative coins to mark diplomatic relations milestones with foreign countries was deviated by extending to political parties. Another symbolic gesture was the illumination of the Chinese-built Lotus Tower in Colombo. This tallest tower in Sri Lanka was built by China, which was declared open during the last regime with no access to the public as of now.

Rajapaksa regime signed a joint statement initiated by China at UNHRC, raising concerns on the human rights situation in the UK.

The Sri Lankan Prime Minister Mahinda Rajapaksa attending the conference said, “The friend will always be there, both in sorrow and pleasure. Like the murals on a wall, they never look away… we appreciate the commitments made by the Chinese government for our independence during and after the war, forever”.

At the conference, 11 political parties recognised the CCP as a steadfast champion for developing countries through the BRI, helping to improve infrastructure and production while respecting sovereignty. Further, the Rajapaksa regime signed a joint statement initiated by China at UNHRC, raising concerns on the human rights situation in the UK.

The Sri Lankan government went all out to promote the CCP centenary despite the pandemic environment where the public is struggling with the vaccine drive. However, CCP and Rajapaksa’s marketing campaign failed to catch public attention due to the country’s severe health and economic woes.

The arrival of Basil Rajapaksa is viewed with hope by the government quarters in an attempt to kick start the economy. The triumvirate must, however, remain cautious in suppressing democracy by further expanding the CCP agenda in Sri Lanka.