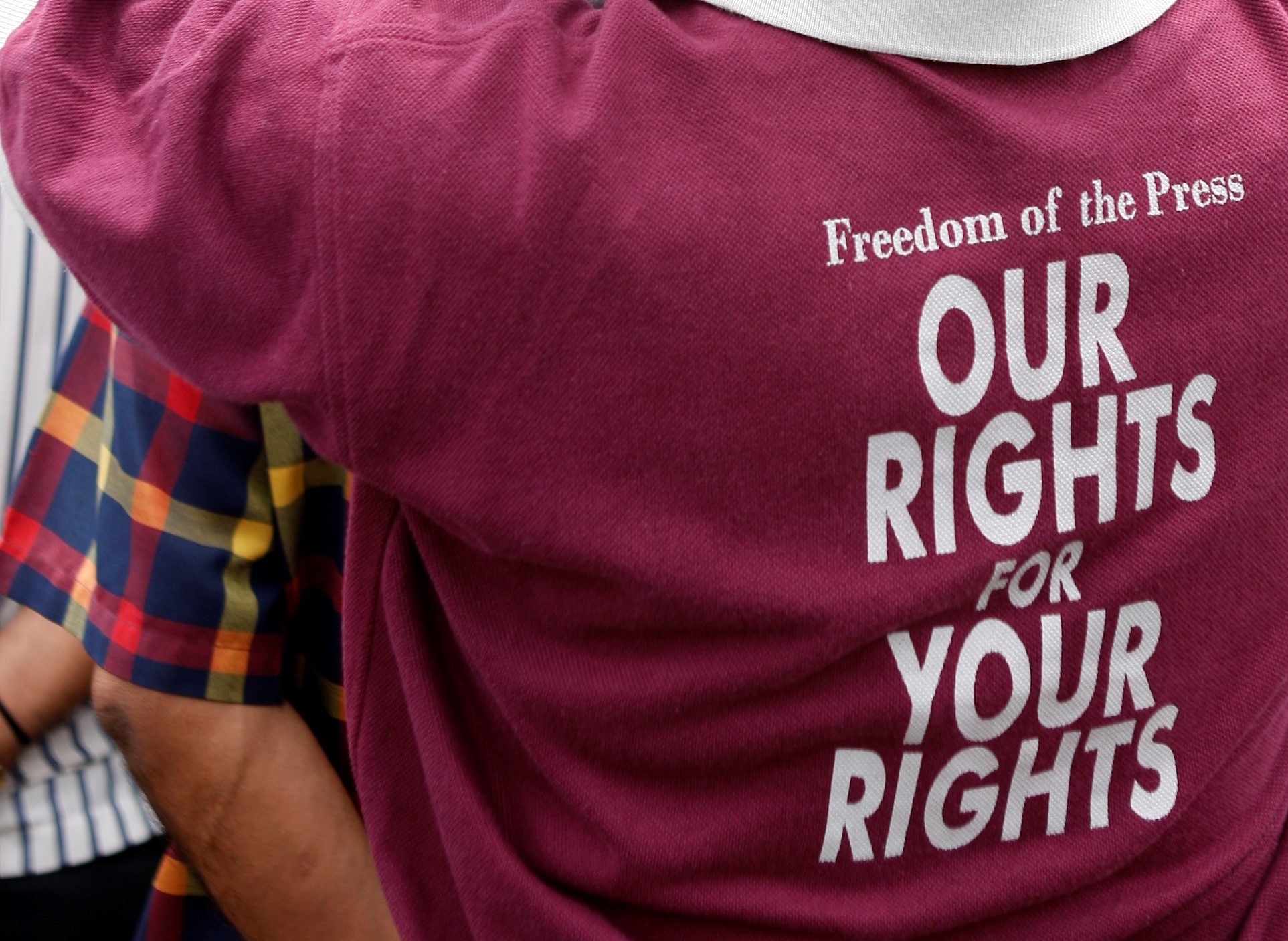 Sir, often we see, particularly professionals – we are also talking about misconduct of some professionals here – standing up for what is right and when they stand up for what is right, they are being persecuted. Being someone with a long track record in the private sector, before I came into politics, many people asked me, “Is it good to go into politics? Will there be reprisals when you are in politics?” Now, we have to change this system.

Professionals, whether they are lawyers, doctors, journalists, police officers, public servants, accountants,bankers, business people, career diplomats, civil servants or whoever they may be, must be protected when they do their job.

I want to remind this House that in 2015, we tried to do things differently. When the Government came into power, many professionals were allowed to remain in their positions and notable among those were the heads of military intelligence, the State intelligence services and the leadership of the Criminal Investigation Department. Our Government only had one CID head – I want to make that point very clear – who was appointed in 2012 under President Mahinda Rajapaksa and that person, Senior DIG Ravi Seveviratne, retired in December, 2019 under President Gotabaya Rajapaksa. We did not manipulate it.

We passed the Nineteenth Amendment to the Constitution to bring rigour to key public sector appointments, giving the Opposition also an opportunity to have a say in those appointments. But, compare that with what happened when President Gotabaya Rajapaksa assumed duties on 19th November, 2019. The very next day, the first thing he did was, he threw out CID Director Shani Abeysekara, demoted him
and sent him off as the Personal Assistant to the DIG in charge of Galle. Even as a Member of the Opposition, I was hopeful that the Government would look forward and not backwards, but what we have seen instead was of unprecedented proportion.

The day before yesterday, thanks to the courage of one Magistrate, Magistrate Ranga Disssanayake, we got to know that the Government has transferred out and gone after the officers who were involved in
investigating, not about the airbus deal, but about the MiG deal. Who are those officers? DIG Dhammika Priyantha has a Master’s Degree in Criminology and was a former Deputy Director of the CID in charge of its Financial Crimes Unit. SP Pavithra Dayaratne was a senior SIS intelligence officer who specialized in unravelling LTTE financial networks. Chief Inspector Nihal Francis was an expert in Mutual Legal Assistance System of obtaining evidence from foreign jurisdictions.

With regard to the MiG case alone, he secured evidence from the US, the UK, British Islands, Latvia, Hong Kong and Singapore. How does this country benefit by transferring such officers with a proven track record to Kilinochchi, the Traffic Division or to some other crimes branch? Who are the officers they are bringing in to replace those CID officers? People who had been removed previously through disciplinary inquiries.

The CID and the Government want us to believe that former Editor of the “Sunday Observer” and journalist of “The New York Times”, Dharisha Bastians, former CID Director Shani Abeysekera and former Chairman of the Lake House and the Hilton and former member of the UNP Working Committee, Krishantha Cooray, all got together to mastermind this fictitious abduction. They have said this without a shred of evidence simply to paint them as villains for not having bowed to their threats and intimidation. They do not stop there. They have also gone after the telephone records of Dharisha Bastians and Krishantha Cooray, a very wellknown and respected media personality. They are using the excuse of a criminal investigation for doing that. This is the truth; this is the reality. They are checking on Dharisha Bastians’ phone records to check whether she had made calls to the CID. She is a journalist. They have questioned the journalists and lawyers who worked with her. How can the journalists practise their profession if their phone records are checked by the CID at their whims and fancies? If the CID needs to check a citizen’s details, they must get a court order to do so.

We are not living in a military State and the House needs to take note of this. We must not let these things slip by. If there was any doubt that this was a political witchhunt, just look at what they have now done to Dharisha Bastian’s husband, Mr. Gihan Indraguptha, a career diplomat at the Foreign Ministry. He was posted to Geneva two years ago. Now, as they want to put pressure on his wife, he has been summarily recalled without an explanation and without any replacement for him being named. In doing so, the Government has violated not only Gihan Indraguptha’s fundamental rights and legitimate
expectations as a career civil servant, but are also flouting an ancient foundational principle that underpins every decent system of law in the world and that fundamental principle is – it is not a UNP policy; it is not a Pohottuwa policy – that individuals should never be punished for things they have not done, just because other people have done those. It is not just that the Government is targeting and persecuting professionals – that is a lesser crime – but the greater crime is that the peers of the persecuted have stood silently without rising to the defence of their comrades.

There was a time in Sri Lanka when a threat by the Government, going after a journalist was enough to provoke an outcry in the media through editorials of condemnation. But now, I would like to ask the
journalists, “Are you all unprincipled or are you all scared?” Not a single editorial has been written in newspapers, protesting about this witch-hunt that is going on. There was a time when the National Police Commission and the IGP would have stood firm against politically motivated transfers and appointments and defended honest police officers who were persecuted for doing their jobs. There was a time when the Bar Association of Sri Lanka would have risen up in arms if the Government had got the CID to summon an attorneyat-law and grill her about confidential information and journalistic sources.

I would like to ask the President of the Bar Association, “Do you not care about what is happening?” It was left to a Magistrate to stick his neck out and defend the professional police officers responsible for the investigation into the MiG deal and for Sri Lanka’s first ever successful extradition of a criminal suspect. Now, there is fear that those who stand between Udayanga Weeratunga and his freedom will be targeted.

It is high time that all professionals stood up for those who are doing what is right. The only people whose integrity, honesty and professionalism stand between the Government and a cover-up of the MiG deal are, Fort Magistrate Ranga Dissanayake and the Attorney-General Dappula De Livera. Already it has been reported that moves are underway to pressurize the AG and to transfer or to promote Ranga Dissanayake so that a more amenable Magistrate could handle Udayanga Weeratunga’s case. This House, the Constitutional Council, the independent media and the civil society must stand in solidarity with the Magistrate and the AttorneyGeneral and shield them from undue influence. It speaks volumes of the arrogance and entitlement of this Government, and Udayanga Weeratunga, a first cousin of the President and Prime Minister, was so confident that the CID was on his side and would not try to remand him and never in his wildest dreams did he imagine that a Magistrate would risk the ire of someone with this “royal” blood to do that. But, Magistrate Ranga Dissanayake proved them wrong. I was glad that Hon.Chamal Rajapaksa said that he would look into any lapses by CID officials.

So, the professionals in this country must stand up for and protect other professionals, ensuring that they are allowed to do their jobs with integrity. Police officers must stand up for their persecuted colleagues like Shani Abeysekera and Nihal Francis. Journalists must speak out against the pathetic attempt to frame people like Dharisha Bastians for an abduction, merely because she made a telephone call. Career diplomats must stand in solidarity with Gihan Indraguptha, who is being punished because of no fault of his. Lawyers and the Bar Association must object to the harassment and interrogation of Anurangi Singh by the CID and the Judiciary must stand guard against any attempt to persecute Magistrate Ranga Dissanayake for having the courage to stand tall.

Krishantha Cooray is a capable and committed man,whom I have associated very closely. He loves this country and has made huge sacrifices for it. Anyone who knows him well will agree with me that he is actually incapable of doing anything illegal or immoral. As a country, whatever party we may belong to, we have a duty to protect people like him. When we come to power, we will never use the tools in our possession to sling mud at professionals and business people like Susantha Ratnayaka or Ashok Pathirage.

Finally, I must urge the professionals who are holding powerful positions to execute their duties professionally and others to stand up for your peers, despite your political preferences. If we do not do this, the brain drain will continue and over time, we will lose all the people of the caliber whom we need to develop this country and the institutions that this nation needs.