For some time now it has been quite clear to economists that assessments of economic performance cannot be solely focused on overall income growth, but must also take into account income distribution.This is because a growing body of research has established that where the income inequalities are large and widening it’s often the case that both economic prosperity and social stability soon suffer.
The UPFA’s “Mahinda Chinthana Development Policy Framework” explicitly recognises the problem of rising inequality and the importance of reducing it. It is a rural centered development framework, quite in contrast to the “Regaining Sri Lanka”framework of the previous UNP government.Successive budget speeches of the UPFA have reiterated the government’s commitment to increase the income of the poor and the rural areas at a faster pace than in previous decades.A number of strategies have been introduced (under various names: Gama Nagma, GamiDiriya, GamiPubuduwa and DiviNaguma) aimed at improving the income levels and the living standards of the poor and rural society. 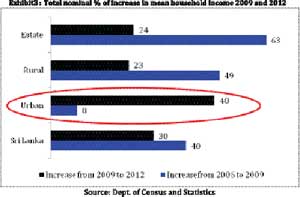 This policy focus is to be especially appreciated given that even in 2012, 79% of Sri Lankan households are classified as being in the rural sector, and the urban sector accounts for barely 17% (Exhibit 1). The total number of households estimated in the country is 5.2 million.
Mismatch between Rhetoric and Reality
The household income and expenditure data released by the Department of Census and Statistics however tells a different story. It says that reality is not consistent with the rhetoric, especially in the trajectory of post-war economic growth. According to the statistics, urban householdsare improving their lot much faster than during the war period, and the rural and estate households are improving much slower(Exhibit 2).

This result is mirrored in comparison of the rich and poor as well (leaving aside whether they live in urban or rural areas). The lot of the richer households is improving much faster than that of poorer households.
To be noted in reading the results
The periods of analysis used here coincide with the implementation of the National Household and Expenditure Survey implemented by the Department of Census and Statistics, since that survey is the source of the data. 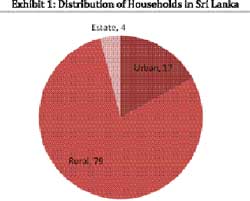 All the income growth figures are reported in nominal terms (without adjusting for inflation). They should not therefore be read as improvement in consumption capacity, which after inflation would be much more modest.
Pre-Chinthanaya was slightly better for the rural sector
The household income expenditure survey data is available from 2002, 2006/7, 2009/10 and 2012/13. Even though the survey was also conducted in 2005, the report and results seem to have been retracted by the department, and is not available for public perusal.
The fastest average annual growth in overall income as well as in rural and estate sector income was recorded during 2002-2006/7 period (4.5 years). This seems ironic given that the popular conception is that the policy emphasis during the 2002-2005 period wasmore urban centeredthan in the periods after.
2002-2006/7:Rural income increased by an annual rate of 15.92% and estate sector income increased by 18.43% during that period (Exhibit 2). Urban incomes also recorded a healthy growth of 14.37%, though lower than the rural and estate sectors.
2006/7 to 2009/10: In this period the annual rate of income growth slowed drastically for the urban sector, but rural and estate sector growth continued at a rapid pace, even though a little slower than the previous period.Over-all in the full period total rural and estate income increased by 49% and 63% respectively, while urban incomes recorded only 8% growth. (See Exhibit 2 for the average annual rates of growth).
Post-war income growth crashes the “Chinthanaya”
The post war results are quite different. Income growth registers a continued slow down, and the main beneficiaries are now the urban households, not the rural. Total urban income growth post-war (48%) is twice that of rural(23%) and estate sector (24%) income growth (Exhibit 3). The urban income has increased by as opposed to the 23% and 24% growth recorded by the rural and estate sectors.
This same trend can be observed in growth in expenditure as well. From 2002 up to 2009, expenditure growth rates were higher in rural and estate sectors compared to urban sector. From 2009 to 2012, it is the other way around: urban sector expenditures growth at 32% growth followed by rural (22%) and estate (16%) sectors.

The poorest are getting an even smaller slice of the pie
Despite the robust growth of the rural and estate sectors from 2002 to 2009/10 the poorest 10% of the households in the country have not increased their income share.
From 2002 to 2009, the income share of the poorest 10% of the households stagnated at 1.7% of total income. From 2009 to 2012, the share has in fact declined to 1.4%. In contrast, the share of income of the richest 10% of households in the country has increased from 36.8% to 38.7% during the same period.
This is further corroborated by the Gini coefficient, which quantifies on a scale between 0 and 1, the severity of income inequality. Zero implies perfect equality and one, perfect inequality.Reading from 1981 to 2005 the coefficient value has increased from 0.43 to 0.47.Yet during 2002-2009, where the rural and estate sector growth is amongst the highest, the recordedthe Gini coefficient increased from 0.47 to 0.49 indicating further increase in income inequality.
Caveats and Conclusion
The data made available by the Department of Census has some considerable limitations. The main issue is that while results given are in aggregate, the earlier Income and Expenditure Surveys did not cover all the geographic areas covered by the later surveys. While the whole country was covered in 2012/13, the 2009/10 survey excluded Mannar, Killinochchi and Mullaitivu districts in the Northern Province; the 2006/7 survey excluded the whole Northern Province as well as Trincomalee district in the Eastern Province; and the 2002 aggregate reporting excluded all of the Northern and Eastern Province.
Taking into account these changes in scope will modify the specific numbers in the analysis, but the conclusions of this analysis will remain robust. This is because the post-war result will only be affected by adding Mannar, Killinochchi and Mullaitivudistricts to the sample in 2012/13 (everything else was included in 2009/10), and together they account for only 1.6% of the total population.
The surprising conclusion remains this: the MahindaChinthanaya vision for rural and estate sector income growth was more alive before the vision was announced, than after. And the rural and estate sector were growing much faster before the war ended than after. It is the urban populations, and the richer households that have benefited from the post-war growth bump. And (as previous Verité Insights have shown) that bump-up, may also have ended.
Verité Research provides strategic analysis and advice to governments and the private sector in Asia. Comments welcome, email [email protected]
Island
Share
Facebook
Twitter
WhatsApp
Pinterest
Email